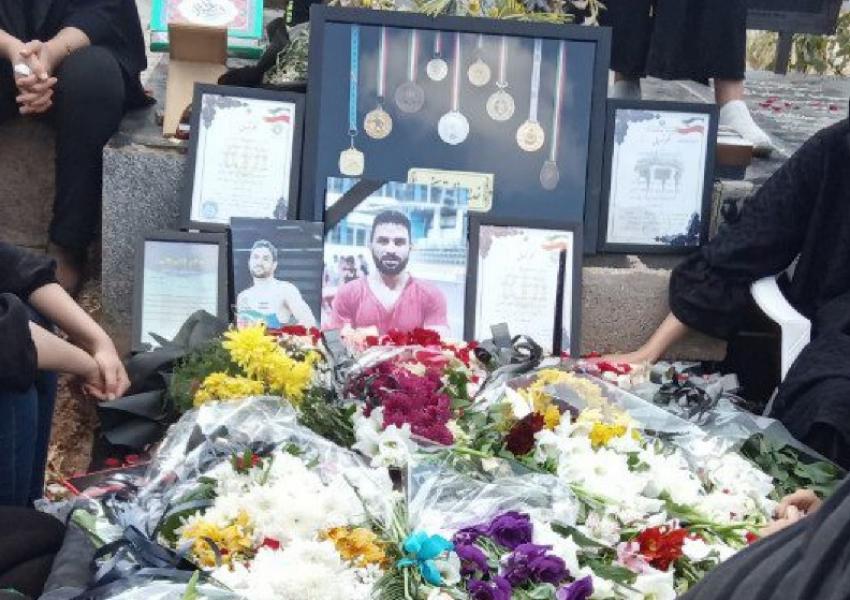 President Donald Trump urged Iran to spare the life of Navid Afkari. More than 20 international rights organizations insisted that he was innocent, and had been tortured into confession, and that there was no firm evidence of his guilt. The mullahs ignored them.

Prince Reza Shah (son of the former Shah of Iran), put out the video of the funeral procession for Navid Afkari, the 27-year-old Iranian wrestler. It was heart-wrenching to watch. Navid was accused of killing a security guard during 2018 protests. After a videotaped confession, he was sentenced to death. He died Saturday in the custody of Iranian officials. His burial was conducted at night with high security. There is a high degree of probability that Navid was tortured to death.

Iranian officials claim Afkari was executed by hanging at the Adelabad Prison, though this is not credible. Afkari’s death on September 12 was during the month of Muharram; one of the 4 sacred months of the year. The constitution of the Islamic Republic of Iran and Sharia Law forbid killing during that sacred month.

Normal practice is that the family of a prisoner on death row is notified two days prior to the execution, and is allowed to meet the prisoner the day before execution. Navid’s family was not notified. It appeared that there was blunt trauma on his body, a broken nose, and his face was deformed. The cloth in which his body was wrapped was stained with blood. His family was not allowed to see the body, only his deformed face for the funeral.

Before his death, Navid was able to leak a recording out of prison. In the recording he pronounced “If I am executed, I want you to know that an innocent person, even though he tried and fought with all his strength to be heard, was executed.”

The Persian Kingdom existed before Christ. It became the Islamic Republic of Iran with the 1979 Revolution, which brought the mullahs to power. Theocratic Sharia Law governs Iran. Homosexuals are executed, women without headscarves are arrested, media is censored, journalists are imprisoned and tortured. Citizen executions are the second highest in the world. The economy is in trouble with record unemployment. Hard currency leaving the country is banned. Gas prices are up more than 50%. There are shortages. The Rial has plummeted more than 70%.

Significant citizen protests continued in 2018 across Iran in 80 cities. Grievances revolved around government corruption, mullah millionaires, squandering the nation’s wealth on terrorist activities, unemployment, gender in-equality, forced wearing of the hijab, and democratic rights. More than 3,700 protesters were arrested. There were reports of arrested demonstrators being tortured or killed.

Navid and his two brothers were among the 2018 protesters in Shiraz. Distraught Bahieh Namjoo, mother of the three brothers, made a video stating that security agents came to their home and seized Navid; and later both other brothers were taken. Brothers of Navid have been sentenced to decades in prison.

The leaders of 22 international human rights organizations advocate the establishment of a ‘select committee’ at the United Nations to investigate the grave violations of human rights in Iran. It is believed that there are 120,000 political prisoners in Iran.

Mrs. Maryam Rajavi, President-elect of the National Council of Resistance of Iran, lives in Paris. Regarding the death of Navid Afkari, she issued the following statement:

“The religious dictatorship ruling Iran cannot survive for even one day without suppression, execution, and torture. By shedding the blood of the brave children of Iran, such as Navid, it seeks to preserve its rule in the face of the Iranian people’s uprising. But Navid’s martyrdom will only add fuel to the flames of the Iranian people’s uprising and will send the mullahs’ regime to the grave forever.”

Secretary of State Mike Pompeo on Al Arabia voiced “The Iranian regime’s execution of Navid Afkari is a vicious and cruel act. We condemn it in the strongest terms. It is an outrageous assault on human dignity, even by the despicable standards of this regime.”

Iran is a savage theocratic regime which condones torture and killing to frighten others into silence and submission. Some believe that silence is acceptance of these atrocities. Let us hope that silence is the patient soldier waiting for the hour to strike and become victorious.