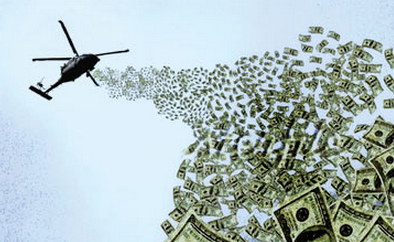 Fifteen years after embarking on its largely ineffective quantitative easing program, Japan appears poised to try the form recommended by Ben Bernanke in his notorious “helicopter money” speech in 2002. The Japanese test case could finally resolve a longstanding dispute between monetarists and money reformers over the economic effects of government-issued money.

When then-Fed Governor Ben Bernanke gave his famous helicopter money speech to the Japanese in 2002, he was talking about something quite different from the quantitative easing they actually got and other central banks later mimicked. Quoting Milton Friedman, he said the government could reverse a deflation simply by printing money and dropping it from helicopters. Such a gift of free money with no strings attached would find its way into the real economy and trigger the demand needed to power productivity and employment.

What the world got instead was a form of QE in which new money is swapped for assets in the reserve accounts of banks, leaving liquidity trapped on bank balance sheets. Whether manipulating bank reserves can affect the circulating money supply at all is controversial. But if it can, it is only by triggering new borrowing. And today, according to Richard Koo, chief economist at the Nomura Research Institute, individuals and businesses are paying down debt rather than taking out new loans. They are doing this although credit is very “accommodative” (cheap), because they need to rectify their debt-ridden balance sheets in order to stay afloat. Koo calls it a “balance sheet recession.”

As the Bank of England recently acknowledged, the vast majority of the money supply is now created by banks when they make loans. Money is created when loans are made, and it is extinguished when they are paid off. When loan repayment exceeds borrowing, the money supply “deflates” or shrinks. New money then needs to be injected to fill the breach. Currently, the only way to get new money into the economy is for someone to borrow it into existence; and since the private sector is not borrowing, the public sector must, just to replace what has been lost in debt repayment. But government borrowing from the private sector means running up interest charges and hitting deficit limits.

The alternative is to do what governments arguably should have been doing all along: issue the money directly to fund their budgets. Having exhausted other options, some central bankers are now calling for this form of “helicopter money,” which may finally be raining on Japan if not the US.

According to Gavyn Davies in the July 17th Financial Times:

Whether or not they choose to admit it – which they will probably resist very hard – the Abe government is on the verge of becoming the first government of a major developed economy  since 1945 to monetise its government debt on a permanent basis.

. . . The direct financing of a government deficit by the Bank of Japan is illegal, under Article 5 of the Public Finance Act. But it seems that the government may be considering manoeuvres to get round these roadblocks.
Recently, the markets have become excited about the possible issuance of zero coupon perpetual bonds that would be directly purchased by the BoJ, a charade which basically involves the central bank printing money and giving it to the government to spend as it chooses. There would be no buyers of this debt in the open market, but it could presumably sit on the BoJ balance sheet forever at face value.

Bernanke's role in this maneuver was suggested in a July 14th Bloomberg article, which said:

Ben S. Bernanke, who met Japanese leaders in Tokyo this week, had floated the idea of perpetual bonds during earlier discussions in Washington with one of Prime Minister Shinzo Abe’s key advisers...He noted that helicopter money -- in which the government issues non-marketable perpetual bonds with no maturity date and the Bank of Japan directly buys them -- could work as the strongest tool to overcome deflation...Key is that the bonds can't be sold and never come due. In QE as done today, the central bank reserves the right to sell the bonds it purchases back into the market, in order to shrink the money supply in the event of a future runaway inflation. But that is not the only way to shrink the money supply. The government can just raise taxes and void out the additional money it collects. And neither tool should be necessary if inflation rates are properly monitored.

The Japanese stock market shot up in anticipation of new monetary stimulus, but it dropped again after the BBC aired an interview with Bank of Japan Governor Haruhiko Kuroda recorded in June. He ruled out the possibility of "helicopter money" – defined on CNBC.com as “essentially printing money and distributing payouts” – since it violated Japanese law. As the Wall Street Journal observed, however, Bernanke’s non-marketable perpetual bonds could still be on the table, as a way to “tiptoe toward helicopter money, while creating a fig leaf of cover to say it isn’t direct monetization.”

Who Should Create the Money Supply, Banks or Governments?

If the Japanese experiment is in play, it could settle a long-standing dispute over whether helicopter money will “reflate” or simply hyperinflate the money supply.

One of the more outspoken critics of the approach is David Stockman, who wrote a scathingblog post on July 14th titled “Helicopter Money – The Biggest Fed Power Grab Yet.” Outraged at the suggestion by Loretta Mester of the Cleveland Fed (whom he calls “clueless”) that helicopter money would be the “next step” if the Fed wanted to be more accommodative, Stockman said:

This is beyond the pale because “helicopter money” isn’t some kind of new wrinkle in monetary policy, at all. It’s an old as the hills rationalization for monetization of the public debt – that is, purchase of government bonds with central bank credit conjured from thin air.

Stockman, however, may be clueless as to where the US dollar comes from. Today, it is all created out of thin air; and most of it is created by private banks when they make loans. Who would we rather have creating the national money supply – a transparent and accountable public entity charged with serving the public interest, or a private corporation solely intent on making profits for its shareholders and executives? We’ve seen the results of the private system: fraud, corruption, speculative bubbles, booms and busts.

Adair Turner, former chairman of the UK Financial Services Authority, is a cautious advocate of helicopter money. He observes:

We have been left with so much debt we can’t just grow our way out of it – we should consider a radical option.

Not that allowing the government to issue money is so radical. It was the innovative system of Benjamin Franklin and the American colonists. Paper scrip represented the government’s IOU for goods and services received. The debt did not have to be repaid in some other currency. The government’s IOU was money. The US dollar is a government IOU backed by the “full faith and credit of the United States.”

"The Constitution of the United States does not give the banks the power to create money. The Constitution says that Congress shall have the power to create money, but now, under our system, we will sell bonds to commercial banks and obtain credit from those banks. I believe the time will come when people [will] actually blame you and me and everyone else connected with this Congress for sitting idly by and permitting such an idiotic system to continue."

Beating the Banks at Their Own Game

Issuing “zero-coupon non-marketable perpetual bonds with no maturity date” is obviously sleight of hand, a convoluted way of letting the government issue the money it needs in order to do what governments are expected to do. But it is a necessary charade in a system in which the power to create money has been hijacked from governments by a private banking monopoly engaged in its own sleight of hand, euphemistically called “fractional reserve lending.” The modern banking model is a magician’s trick in which banks lend money only a fraction of which they actually have, effectively counterfeiting the rest as deposits on their books when they make loans.

Governments today are blocked from exercising their sovereign power to issue the national money supply by misguided legislation designed to avoid hyperinflation. Legislators steeped in flawed monetarist theory are more comfortable borrowing from banks that create the money on their books than creating it themselves. To satisfy these misinformed legislators and the bank lobbyists holding them in thrall, governments must borrow before they spend; but taxpayers balk at the growing debt and interest burden this borrowing entails. By borrowing from its own central bank with “non-marketable perpetual bonds with no maturity date,” the government can satisfy the demands of all parties.

Critics may disapprove of the helicopter money option, but the market evidently approves. Japanese shares shot up for four consecutive days after Abe announced his new fiscal stimulus program, in the strongest rally since February. As noted in a July 11th ZeroHedge editorial, Japan “has given the world a glimpse of not only how ‘helicopter money’ will look, but also the market's enthusiastic response, which needless to say is music to the ears of central bankers everywhere.” If the Japanese trial balloon is successful, many more such experiments can be expected globally.