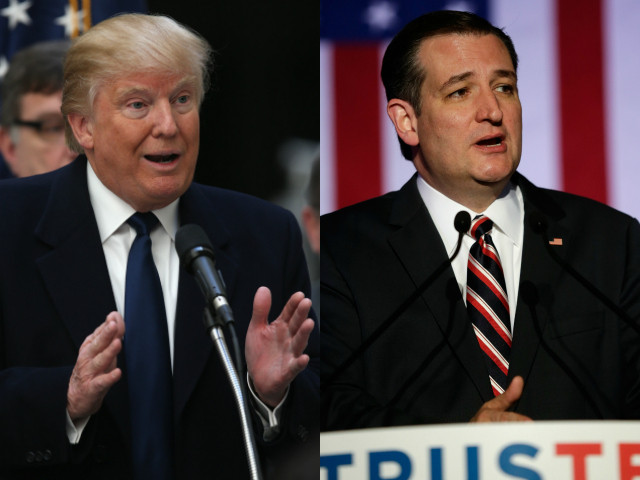 hen Senator Cruz did not endorse Trump for president, I remarked to my wife, “We just watched a man commit political suicide.” I had supported Cruz from day one because of his clear Christian testimony, his commitment to constitutional principles, and his courageous stand in the senate against almost everyone. I expressed concern in my columns about his wife having worked for the CFR but was willing to overlook that failure since everyone is flawed. He was far superior to Trump in every way except Trump’s business acumen.

After it was obvious that Trump was to be the nominee, I declared that I would hold my nose and vote for Trump; however, I soon realized that I couldn’t hold my nose that tightly. I began to wobble and waver, and wondered aloud if I should not vote for a third party or do a write in vote leaving the consequences to God. After all, He can manipulate events to put His choice in office.

I will do what I can to get Trump elected but I can’t get excited about it. The Republican platform is good, even exceptional, while the convention reached the highest highs and the lowest lows. The lows were having a homosexual speak and given a standing ovation (do I hear the GOP closet door creaking open?) and having a Muslim deliver the benediction. (This dude has four active Maryland court charges totaling more than $26,000 in unpaid bills against him.)  But then I don’t have much right to complain since I stopped supporting the Grand Old Progressives many years ago. I often vote for them but stopped writing checks.

I was discouraged, disappointed, and disturbed when Ted refused to keep his pledge to support the nominee. I surmised that he was being petty, petulant, and personal for sure.  And political, with his eyes locked on the future. Then I started thinking with my brain instead of my gut.

Ted was now in a quandary: He could not keep his commitment to support the GOP nominee and also give the honor due his wife and father. He chose to put his family first and I would have done the same—in a heartbeat. I believe he did it knowing it might ruin him politically.

I had joined the throng that demanded Cruz say the magic words: “I endorse Trump!” I wrestled with myself for twenty-four hours then applied the principle I have followed all my adult life: I put myself in Ted’s place and realized I, too, would have put family first under the same circumstances. Yes, Ted had promised to support the nominee but surely that was with the reasonable, responsible, and realistic caveat that the nominee did not turn out to be a closet communist or child molester, etc. Ted could not have known that Trump would insult his wife or accuse his father of being connected with the Kennedy assassination!

Trump supporters should keep in mind that Trump has never apologized for his scurrilous accusations. Trump needs to understand that money cannot purchase character or class. If he had either, he would apologize for his vicious, personal attacks on the Cruz family.

I think Ted could have been a little wiser during his speech without alienating anyone. He could have said, “I congratulate Donald Trump for a stunning win, an exemplary platform, and for an exciting convention. I will vote for the Republican ticket in November and I hope he and Pence win. I think he will make a great president even though he is as shameless as an egg-sucking dog.”

It is better to have principled division than a delusional, defective, or dishonest conformity. Trump for president and Ted Cruz for a lifetime seat on the U.S. Supreme Court!

Now that would give Hillary and her pathetic progressives perpetual palpitations.

This article was originally published on CSTNews.com.