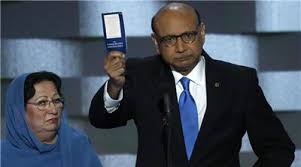 dia has been hyperventilating over the Trump-Khan controversy; but of course, they prefer dealing with that rather than Clinton’s compulsive lying! Furthermore, it seems to be acceptable for Hillary to call Patricia Smith (who lost her son in Benghazi because of Hillary’s incompetence) a liar after Smith’s speech at the RNC convention. The media is strangely silent about that attack upon a grieving mother but then, she is not a Democrat. That is further unneeded proof that the mainstream media is composed of sanctimonious hypocrites.

There is no disagreement, discussion, or debate over the fact that Captain Khan was a competent, courageous, and committed hero of whom his parents and all Americans should be immensely proud.

We have been told that Gold Star families are sacrosanct but I don’t believe that. While their hero son is untouchable, his family is not. After all, Butch O’Hare was a Medal of Honor Winner after whom Chicago’s O’Hare Airport was named. Lieutenant Commander O’Hare literally rammed enemy airplanes after running out of ammunition, shooting down or destroying five planes to divert them from the American fleet that was almost unprotected. However, his father was a slime bag lawyer who defended Al Capone (and was his business manager) making it possible for Al to control the Chicago rackets and kill whomever he pleased. Am I wrong to call the father a “slime ball” even though he was a Gold Star father and a Medal of Honor father?

It must be remembered that Mr. Khan was speaking at a political convention. Does any sane person affirm that he is immune from criticism? Does the loss of a son give him the right to make inaccurate, insensitive, or irresponsible comments about Donald Trump? It is embarrassing that political leaders would declare that Gold Star Families have a right to say anything they want without being held accountable!

Furthermore, Khan’s law office in New York City specializes in bringing Muslim immigrants into America so he has financial a conflict with Trump’s plan to temporarily limit immigration! Wonder why that connection was not mentioned at the convention. Theodore Shoebat and Walid Shoebat reported that “Khizr Muazzam Khan is a Muslim Brotherhood agent, working to bring Muslims into the United States.” Well, well, well. Muslim Brotherhood, advocates and supporters of terror!

But it gets worse. The Shoebats report, “Khan is a promoter of Islamic Sharia Law in the U.S. He was a co-founder of the Journal of Contemporary Issues in Muslim Law (Islamic Sharia). Khan’s fascination with Islamic Sharia stems from his life in Saudi Arabia. During the eighties Khan wrote a paper titled Juristic Classification of Islamic [Sharia] Law. In it he elucidated on the system of Sharia law expressing his reverence for ‘The Sunnah [the works of Muhammad] — authentic tradition of the Prophet Muhammad (Peace be upon him).’”  Khan promotes Sharia law over U.S. law!

Khan assumed that Trump had not read the Constitution which was insulting to Trump and was arrogant and asinine and not accurate. Is it also permissible for me to ask if Mr. Khan has ever read the Koran? I will gladly lend Khan a copy of my Koran published in Medina, Saudi Arabia. He will discover that Trump’s evaluation of Islam is not unreasonable or untrue or even unkind! The Koran provides over a hundred verses that command Muslims to fight and kill non-Muslims.

Khan told CNN’s Jim Acosta Sunday morning that terror has “nothing to do with Islam.” Of course, honest, informed people know Islam and terror are bound hip and thigh. Turkey’s Prime Minister Erdogan said on Kanal D TV’s Arena program:  “There is no moderate or immoderate Islam. Islam is Islam and that’s it.” I think Erdogan qualifies as a true Muslim and he should know what they believe!

Moreover, the “Blind Sheikh” Omar-Abdul Rahman is a recognized Muslim scholar who was trained in Islam’s two main universities located in Cairo, Egypt. Omar was the brains behind the 1993 bombing of the World Trade Center that killed six and injured more than a thousand Americans. He is now serving a life sentence in an American prison and he teaches that the terrorists are the true Muslims! So, that means the politicians and media should stop speaking of “radical” Muslims but simply speak of Muslims, or koranic Muslims. I will lend Mr. Khan my Koran so he can confirm that fact. The text plus a footnote on page 39 easily proves that all Muslims are obligated to jihad, or “holy fighting.” So, how can any sane American not demand a temporary ban until we can determine the legitimacy of every immigrant?

Khan will discover that Trump’s suggestion that Mrs. Khan was not permitted to speak because of religious or cultural restraints is not outrageous at all. Anyone who has travelled in Muslim nations knows firsthand that such restrictions are normal. I have visited mosques in the U.S. and in the Middle East and women are always segregated in a separate room although I am told that one third of U.S. mosques do not have segregated worship.

If there is no separate room or a partition then women can pray behind the men who have the front and best seats. The reason for that is revealed by Asma’ daughter of Abu Bakr who said, “I heard the Apostle of God say, ‘One of you who believes in God and in the Last Day should not raise her head until the men raise their heads lest she should see the private parts of men.’” (Sunan Abu Dawud, No. 850.) Does Khan know that? Will he repudiate that humiliating practice of his Muslim buddies?

Does Khan know that a woman’s testimony in a Muslim court is worth half that of a man? Is he willing to repudiate that insulting practice?

Does Khan know that a Muslim man has a right to beat his wife or all four of his wives and Muslim television stations even give instructions how to correctly beat a wife? Will Khan repudiate such a barbarous practice?

Does Khan know that a rape victim must produce four men in court to prevail in a rape case thereby convicting the rapist? Will Khan demand that such an unfair, unreasonable, and untruthful system be changed? Will he also tell me why four men could witness a rape without preventing it?

Does Khan know that Muslims commonly sexually mutilate little girls (Female Genital Mutilation) and that barbaric practice has tripled in the U.S. according to the General Accounting Office (GAO) just released report? That “surgery” impacts them physically, emotionally and sexually for their lifetime, yet no one has been prosecuted in the U.S. for that crime! (But, be sure not to leave a bruise on your son’s rear after a spanking!) Surely, Khan will demand that his fellow Muslims cease such incredible barbarism. We’ll see.

Khan has demanded that Republicans repudiate Trump’s statements and his “black soul;” so surely Khan will be willing to demand that his fellow Muslims, from various nations, repudiate and stop the denigrating, degrading, dangerous, and deadly treatment of women. Whose soul is “black”?

I have often made it clear that Trump is not my choice for President, but because of the Supreme Court appointments; the immigration mess; the massive terrorism; etc., I will vote for him hoping he is not a tall Mussolini. He may turn out to be another Ronald Reagan sans cowboy boots!

Mr. Khan, I’m waiting for you to answer my charges or document when you publically opposed the mistreatment of Muslim women. I will apologize if you have renounced your previous support for sharia law and the Muslim Brotherhood. Please send documentation.

I have my beautifully bound Koran ready to lend you.

This article was originally published on CSTNews

Sources:
What The Media Is Not Telling You About The Muslim Who Attacked Donald Trump; Theodore and Walid Shoebat