When the United States was founded, extreme financial discipline was the rule, not the exception. If the nation did not have the money to acquire an asset or construct a project, it did not spend the money. How quant this concept would seem to our politicians today, who don't seem to understand the meaning of the term "fiscal restraint." Today, the US buys whatever it wants, whenever it wants, and simply "borrows" the money. If the US wants something it buys it with absolutely no regard to what borrowing all this money will do the country.

From the atification of the Constitution until 1933, a period of 145 years, there was basically no inflation in the US. How was this possible? Very simply, it was because the US currency was gold and silver. Gold and silver do not fluctuate in value in relationship to their buying power. On the other hand, currencies that are not backed by hard assets such as precious metals (called "fiat currencies") fluctuate in value relative to their buying power; we call this inflation.

1933 was a defining moment in US history that forever changed the nation from a great financial power to the world's largest debtor nation. In a desperate bid to end the Great Depression, President Franklin Delano Roosevelt ("FDR") signed into law, without a vote in Congress, the single most important financial document in the history of the United States. He took the US off the gold standard that had backed the US monetary system since the founding of the country. This allowed Roosevelt to finance the massive public works projects dubbed "The New Deal" with borrowed money. FDR had just "invented" modern inflation.

While the New Deal might have helped get the US back to work, it also ushered in the modern concept of "deficit spending". The US would never return to its roots of fiscal restraint. Today deficit spending has reached such enormous levels that in 2008 just the interest payment alone was 451 Billion dollars, or 18% of the entire US budget's income.

The current administration estimates that the National Debt will nearly double again over the next decade. When you factor in this with the fact that interest rates are at current historically low rates, it is expected that the interest payments alone on the National Debt will climb to 50% of the US total income. This squeeze will put the politicians in the position of having to either DOUBLE our taxes or drastically cut spending on entitlements such as Social Security and Medicare.

You've heard that if you put a frog in boiling water it will jump out, but if you put it in cool water and slowly turn up the heat it will stay in the pot until it boils to death. This is how US citizens have acted with regard to our money. We have allowed our currency to be debased, little by little, until the point where today it is not even called lawful money.

This is a photograph of real money:

As you can see, it was a GOLD CERTIFICATE issued by The United States of America. It was real money, because it was redeemable in GOLD coin at any bank or at the Treasury itself. It clearly states, "This certifies that there has been deposited in the Treasury of the United States of America Twenty Dollars in Gold Coin Payable to the Bearer on Demand.

This is a photograph of play money:

It is really nothing more than an IOU with pretty engraving. Instead of the Gold Certificate seal, you have the seal of the Federal Reserve System. But the main difference is that UNITED STATES OF AMERICA no longer appears at the top of US currency. The top spot on our currency now reads "FEDERAL RESERVE NOTE." And noticeably missing is what this "note" can be redeemed for. The answer is - more notes. You can change your 20 for two 10's, or four 5's, or 20 singles. But you cannot get 5 cents worth of silver or gold from the government for your twenty dollar bill, because our currency is now a "fiat currency" - backed by nothing.

Federal Reserve Chairman Ben Bernanke put it this way: "The U.S. government has a technology, called a printing press, that allows it to produce as many U.S. dollars as it wishes at essentially no cost." That is how much respect the Federal Reserve has for our money. And that is why almost every major nation in the world has been criticizing the US recently for spending money it does not have, and then printing worthless money to pay its debts.

The significance of this transfer in power and authority has been missed by most Americans. Unfortunately all but the most prepared will suffer for their ignorance of this great power transfer.

With no checks whatsoever on its power, the Federal Reserve can issue any amount of currency it decides to, WITHOUT PERMISSION FROM THE PRESIDENT OR CONGRESS. This is despite the fact that the US Constitution states that only Congress is empowered to create money.

How did this tremendous transfer in power take place without a public revolt? Just like the slowly boiling frog, US citizens have grown to accept the result of this power transfer as normal in the way it manifests itself in daily life - inflation. Prior to the creation of the Federal Reserve System, there was no significant inflation in this country for over 150 years.

The leaders of the US have sold out the interests of our country to private bankers. The consequences of this will culminate with US currency hyper inflating, following in the footsteps of many other countries that have already hyper inflated. Ironically, the US has bailed out many of these countries' ruined currencies, adding billions of dollars to the US National debt. None of these countries will come to the rescue of the US.

Americans foolishly think that the US is immune to hyperinflation. Yet even the Chairman of the Federal Reserve, Ben Bernanke, has been sounding warning bells in recent speeches. Hyperinflation is not a rare phenomenon. It is actually a common problem world wide when countries issue a "fiat" currency, one that is backed by nothing. Over 10% of the world's nations have experienced hyperinflation in the last thirty years. 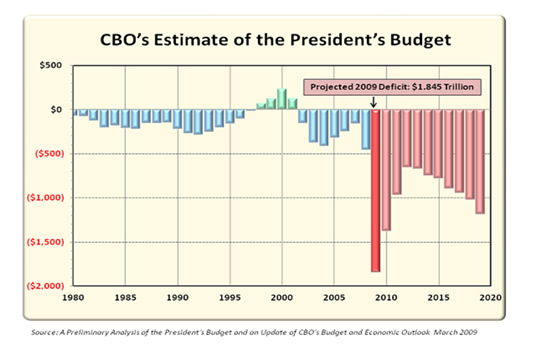 According to the Congressional Budget Office the US National debt will reach $20 Trillion in less than 10 years (see the chart below). That will mean a debt burden of $250,000 for every family of four! The US will almost certainly be forced to hyper inflate its currency in order to pay off this mountain of debt, which is clearly not repayable in today's dollar value.

Hyperinflation is coming to a country near you soon. Be prepared. Gold is the only real money. The Bible refers to gold as money, and it has been recognized as such by every civilization for thousands of years of recorded history. It is the only real protection against inflation.

ABOUT THE AUTHOR:
Greg Halloway has made his living trading gold bullion and rare gold coins for over 40 years. He is a world-renowned expert on rare coin grading and valuing, and was one of the founders of the world's first professional coin grading service. His predictions on the prices of gold billion have been remarkably accurate for dozens of years. Greg resides in Palm Beach and in Belgium. To receive his monograph on rare European coins (which includes beautiful photographs of ancient coins) or to attend a free educational conference call on gold, write to Info@GregHalloway.com.