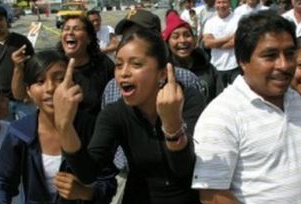 As Barack Obama pushes his ‘transformation of America’ into a haven for illegal invaders from the 3rd world, it is useful to consider how other presidents have approached the problem, with far greater compassion and concern for American citizens, language and culture. Specifically, President Eisenhower executed “Operation Wetback” as reported: Fifty-three years ago, when newly elected Dwight Eisenhower moved into the White House, America's southern frontier was as porous as a spaghetti sieve. As many as 3 million illegal migrants had walked and waded northward over a period of several years for jobs in California, Arizona, Texas, and points beyond. President Eisenhower cut off this illegal traffic. He did it quickly and decisively with only 1,075 United States Border Patrol agents – less than one-tenth of today's force. The operation is still highly praised among veterans of the Border Patrol.

General Eisenhower, who was gearing up for his run for the presidency quoted a report in The New York Times, highlighting one paragraph that said: "The rise in illegal border-crossing by Mexican 'wetbacks' to a current rate of more than 1,000,000 cases a year has been accompanied by a curious relaxation in ethical standards extending all the way from the farmer-exploiters of this contraband labor to the highest levels of the Federal Government."

Then on June 17, 1954, what was called "Operation Wetback" began. Because political resistance was lower in California and Arizona, the roundup of aliens began there. Some 750 agents swept northward through agricultural areas with a goal of 1,000 apprehensions a day. By the end of July, over 50,000 aliens were caught in the two states. Another 488,000, fearing arrest, had fled the country.

By mid-July, the crackdown extended northward into Utah, Nevada, and Idaho, and eastward to Texas. By September, 80,000 had been taken into custody in Texas, and an estimated 500,000 to 700,000 illegals had left the Lone Star State voluntarily.

Unlike today, Mexicans caught in the roundup were not simply released at the border, where they could easily reenter the US. To discourage their return, Swing arranged for buses and trains to take many aliens deep within Mexico before being set free.

Tens of thousands more were put aboard two hired ships, the Emancipation and the Mercurio. The ships ferried the aliens from Port Isabel, Texas, to Vera Cruz, Mexico, more than 500 miles south. The sea voyage was "a rough trip, and they did not like it," says Don Coppock, who worked his way up from Border Patrolman in 1941 to eventually head the Border Patrol from 1960 to 1973. Mr. Coppock says he "cannot understand why [President] Bush let [today's] problem get away from him as it has. I guess it was his compassionate conservatism, and trying to please [Mexican President] Vincente Fox." There are now said to be 12 million to 20 million illegal aliens in the US. Of the Mexicans who live here, an estimated 85 percent are here illegally. Border Patrol vets offer tips on curbing illegal immigration.

One day in 1954, Border Patrol agent Walt Edwards picked up a newspaper in Big Spring, Texas, and saw some startling news. The government was launching an all-out drive to oust illegal aliens from the United States.

The orders came straight from the top, where the new president, Dwight Eisenhower, had put a former West Point classmate, Gen. Joseph Swing, in charge of immigration enforcement.

General Swing's fast-moving campaign soon secured America's borders – an accomplishment no other president has since equaled. Illegal migration had dropped 95 percent by the late 1950s.

Several retired Border Patrol agents who took part in the 1950s effort, including Mr. Edwards, say much of what Swing did could be repeated today.

"Some say we cannot send 12 million illegals now in the United States back where they came from. Of course we can!" Edwards says.

Edwards says: "When we start enforcing the law, these various businesses are, on their own, going to replace their [illegal] workforce with a legal workforce."

While Congress debates building a fence on the border, these veterans say other actions should have higher priority.

1. End the current practice of taking captured Mexican aliens to the border and releasing them. Instead, deport them deep into Mexico, where return to the US would be more costly.

2. Crack down hard on employers who hire illegals. Without jobs, the aliens won't come.

3. End "catch and release" for non-Mexican aliens. It is common for illegal migrants not from Mexico to be set free after their arrest if they promise to appear later before a judge. Few show up.

While Barack Obama seeks to eliminate deportations and end barriers to illegal invasions, former President Eisenhower worked to defend the American people against foreign invasions. Bring back Operation Wetback….it’s the “right thing to do!”