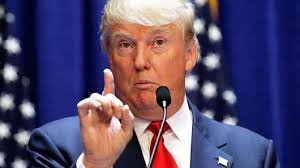 Trump states what a lot of people think, but are afraid to say. But does he say what he says well?  I don't think so. When you keep calling other people dumb or stupid, you become a johnny-one note, and show yourself to be a repetitive boob.  More importantly, one expects that he is trying to distract people from seeing how inexperienced he may be in areas other than hotel and golf course construction and management.


His principle is: the best defense is a good offense. He is boastful. He talks about how perfect his trade deals will be. He says, he will put somebody smart like Carl Icahn in charge of trade with China, and we shall “really start doing much better.”  By so doing, he counts on the fact that most people do not know that Carl Icahn is mainly known for his successes in the area of mergers and acquisitions, not international trade.

Trump completely ignores that our trade deals are not negotiated between the U.S. and individual countries anymore, and have not been negotiated that way for a long time. Trade deals are negotiated multilaterally on a global basis or on a regional basis. Worldwide trade is governed by an institution called the World Trade Organization (WTO). This has been the case for more than 25 years.  Individual heads of state, even our President, cannot intervene on a country by country or case-by-case basis and call the shots.

The trade between the USA and Mexico is, according to “The Donald,” especially an area where we are regularly being outsmarted.   He states that the establishment of plants in Mexico by Nabisco and Ford would never happen under his watch.  With great assertiveness, he assures his audiences that if he were President, he would tell Ford that if they move their factory to Mexico, he would place a 35% tariff on passenger cars going back for sale in the U.S.  However, this is pure bravado.  He does not tell his audiences that imports from Mexico are governed by the General Agreement on Trade and Tariffs (GATT) and upon the North American Free Trade Agreement (NAFTA).  Under existing law, passenger cars imported into the U.S. pay a tariff of 2.5%. So how is Trump going to impose his will on either Ford or Mexico?  The President does not establish tariffs.  We are bound by treaties to certain tariffs for a wide range of products.

He is appealing to ignorance of the facts. By doing so, that implies he is either himself ignorant of the facts, or is simply rabble rousing to convince the man on the street that he is a man of action.

In one of his classic books, On The Principles of Political Economy and Taxation, published in 1821, Ricardo wrote,

But while the free trade principles expressed by Ricardo, endorsed by the leading economics professors and pundits, has led to an increase in worldwide wealth since 1970, U.S. News and World Report indicated that the USA lost 3.2 million jobs to China alone since 2001. The outsourcing of American jobs has been a grave problem that has been talked about, but not properly addressed, for over forty years.

Could that be because American companies have moved their production facilities offshore to take advantage of lower labor costs, and both parties have allowed this to happen because of political contributions to their coffers by the selfsame corporations?

Reversing this trend involves a lot more than being “smart” or “tough” as the braggadocios Mr. Trump would have us believe.