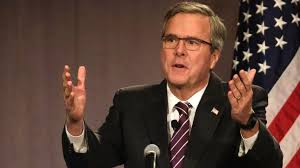 ld reality of the extent of the divide within the Republican Party came when the Associated Press reported that GOP establishment Presidential Candidate Jeb Bush said that he finally "got it" in regard to the angry mood of the American people.


Though his campaign is most associated with the old-party elites, Bush is not alone in that potentially terminal disconnect.

The warnings were clear, but ignored. An article I wrote, "The Spine of the GOP," on May 3, 2011, cited years of desertion by the GOP establishment. The initial "outsiders" were conservatives within the party. Governor Bush confirmed what Middle America has long known; elitist Republicans were more immersed in retaining power and control than in serving the people.

The mood of the electorate was souring. Americans were fed-up with promises not kept. With a touch of irony and déjà vu, the bane of the GOP back then was Donald Trump.


"Myopically, Republicans are asking themselves – why are voters swooning over Trump?

Republican voters began feeling disenfranchised in 2005-2006 when core conservative principles were discarded by a GOP in search of the independent and liberal vote. The outcry of being constituents without representation rang true in conservative circles. Unwarranted spending sprees and unprotected borders had dire consequences for the GOP in 2008 as liberals swept the vote. Once burned, voters today warn that a GOP that compromises values, rights and freedoms could mean the death knell of the party. In 2010, after two harried years of Barack Obama, voters put the GOP on life-support, which opened the door for a fragile recovery – a recovery that relies on spending cuts, defunding Obamacare, restraints on the EPA and an end to onerous backdoor, economy-killing government regulations. The Republican Party has prospects for new life – a half-life at best – until it proves itself to be a party of leadership in defense of the Constitution, adherence to fiscal responsibility and Americans’ God-given rights and liberties.

On such unsteady ground, GOP candidates fear Donald Trump. Consensus is that the appeal of Trump is his bluntness, his unreserved frankness about the dire condition of the country and who put us there. Trump wisely acquiesced that if his joining the race as an Independent [in 2011] would assure re-election of Barack Obama, then he would not do it. Trump says his focus is to make certain that Obama does not see another four years in office. Trump appears to have no interest in being eviscerated by the American people as the historical spoiler who helped push the nation into its demise by aiding, inadvertently or not, in the re-election of Barack Obama.

To restore this nation, politicians with a spine, who will not back down on issues of major consequence, must become America’s future leaders. Those who leech off of this nation, as it struggles for survival, are the antithesis of our founding fathers and have become the enemy within. Though a few slipped through during the last election, serial compromisers need not apply. Whether in office or running for office, it will not be wise to test the ire of the American voter with old style GOP give-away-the-farm politics as usual."

That Jeb Bush just now realizes that he "misjudged the intensity of the anger of the GOP voter" confirms that which the conservative base of the party was already sorely aware. Reminiscent of the quote from the late baseball manager Yogi Berra, the warning in the article posted five years ago to the GOP is today "like déjà vu all over again."