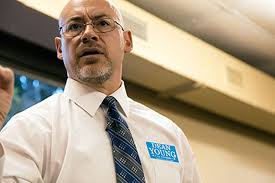 On , a year before the 2016 elections, Congressional candidate Dean Young sent an email blast announcing that he will once again run against Rep. Bradley Byrne for southwest ’s Congressional seat.

Not only did he make his announcement by producing a very angry and deceptive video, but he opened up the video saying he was running for office because Byrne has “systematically lied and misled the people of .”

A little fact checking would have been in order for Dean Young before he spent time and money producing a video attack against Rep. Bradley Byrne.

There are several problems here.  Rep. Byrne was on the same side as Senator Sessions on the issue; there was no “vote for Obama’s amnesty” program; it was an “executive action” by the President. Most importantly, Rep. Byrne not only continued to take a strong stand publicly against the illegal amnesty action by the President, but Byrne actually voted AGAINST the funding of the Amnesty in the DHS funding bill and co-sponsored several amendments to stop it.

The vote by Byrne that Young is deceptively referring to is the December 11th, 2014, vote on a one year Continuing Resolution (CR) spending bill to prevent a government shutdown, titled the “Consolidated and Further Continuing Appropriations Act, 2015.”

The CR vote allowed the government to fund itself temporarily, including payments to veterans and troops, and basic services. It was a temporary stop gap preventing a government shutdown and was to be resolved when the actual funding bills were ready in 2015.

It did not “fully fund Obama’s Amnesty” as the Young video states.

House Appropriations Committee Chairman Hal Rogers explained that the bill “funded almost all of the government through the end of this fiscal year on , but funded the Department of Homeland Security (DHS) only through Feb. 27. This only gave the Obama Amnesty actions two and a half months of funding,” not “fully funding Obama’s Amnesty” as Dean Young claims in the video.

The actual DHS funding bill that had the long term funding of Obama’s executive amnesty action came up for a vote in March, 2015. Bradley Byrne publicly spoke against it, and voted against it. Byrne was one of 176 Republicans that came strongly against John Boehner, voting against the bill, primarily because of the funding of the amnesty action.

Dean Young states one of the main reasons he is running for Congress is that Bradley Byrne “constantly tells the people that he is a conservative and against Obama’s illegal amnesty and then does the complete opposite... He told people that and turned around and did the exact opposite and voted for it.”

NumbersUSA, a well-known national organization that tracks votes on immigration, notes that Rep. Bradley Byrne has an "excellent" voting record against illegal immigration.

Rep. Byrne cosponsored H.R. 29, the Separation of Powers Act of 2015 that would block executive amnesty for illegal amnesty, and voted in favor of the Brooks amendment to remove military amnesty from National Defense Authorization Act in 2015, which would have allowed illegal immigrants to not be required to meet basic military enlistment requirements.

“Byrne voted in 2015 in favor of the Aderholt Amendment to H.R. 240, the Department of Homeland Security Appropriations Act of 2015, to defund President Obama's November 2014 amnesty for illegal aliens."

(All of the above voting information can be found at NumbersUSA.)

Young also strongly claims that Rep. Byrne is not a conservative.

The American Conservative Union is known as one of the largest and oldest grassroots conservative organizations in the . ACU rates politicians by their votes.

Sen. Jeff Sessions and Rep. Bradley Byrne had the highest scores for delegations in the State of Alabama in the 2014 rankings for conservative politicians.

ACU Chairman praises Rep. Byrne; "Rep. Bradley Byrne figured out quickly how to effectively fight for the conservative cause," he said in a statement. "The American Conservative Union is proud to honor his solid voting record, and I am pleased to have his voice in Congress."

Calling a Congressman a liar?

“The reason I am running is that Bradley Byrne has systematically lied and misled the people of southern Alabama;”  followed by “Bradley Byrne is going to continuously lie throughout this campaign because that’s who he is. He won’t stand on his real record.”

Mr. Young obviously doesn’t know the truth of Rep. Byrne’s real voting record on illegal immigration. He is running a political campaign on simply calling the Congressman a liar. At the same time Young has twisted facts into a deceptive video, and even a TV commercial, that is far from truthful at its very core.

A follow up advertisement by Young against Byrne on Planned Parenthood and the Syrian refugees funding is equally deceptive, and does not tell the truth about Congressman Byrne's stand or votes.

Be careful of throwing stones from your glass house, Mr. Young. This desperate attempt to build a name will likely backfire.

A candidate should run a campaign on his or her own attributes, knowledge of issues, how they would fix the problems, and experience to do so.

In 2013 Mr. Young ran against Bradley Byrne, and several others, in a special election forced by the resignation of Congressman Jo Bonner. At a Republican forum luncheon the candidates for Congress were asked which Republican Presidential candidate they had supported in the 2012 Presidential primary and why. Mr. Young laughed loudly and responded that he "didn't even know who had run in that race." He, as a candidate for national office, honestly confessed that he had no idea who had run for the Republican nomination for President just the year before. The gasps and uncomfortable laughter by the loyal Republican activists in the room was chilling. It is unfortunate to see this happening again.

Running for Congress is serious business.  It requires serious people who know the issues, and can intelligently debate the facts. It is embarrassing to have this type of politics directed to the good people of south .

Rep. Bradley Byrne had the highestscores