was dining with his family on the beach in Tel Aviv, Israel on March 9th. Minutes away, the ongoing terror in Israel continued as a knife-wielding Palestinian terrorist struck 12 people, injuring 11, some critically. The Arab terrorist killed an American Army Veteran and West Point graduate.


Taylor Force, 29, who had served in Iraq and Afghanistan, was a graduate student at Vanderbilt University, in Israel learning about business innovations. He was the fifth American killed in Israel by the Palestinian reign of terror inside Israel’s borders.
On the same day, Iran test fired a medium range ballistic missile that could reach Israel.

Two additional terror attacks took place that night as a motorcyclist opens fire on policemen at Jaffa Gate in Jerusalem and another stabbing took place in Judea and Samaria (West Bank).

On February 18th, 2016 another US citizen was killed by Palestinian “terror teens” that went on a stabbing rampage in a grocery store near Ramallah, in the “West Bank.” Sgt. Tuvia Weisman was a 21 year old IDf soldier, with dual citizenship, on leave, grocery shopping with his family when he tried to help others being stabbed by the terrorists. He was mortally wounded.

According to the Israel foreign Ministry, “The supermarket where he was killed, which employs both Israelis and Palestinians and is popular with both Israeli and Palestinian shoppers, has become a symbol of coexistence. It has been targeted several times since the current wave of terrorism”

Joe Biden said concerning the terror attack that killed Taylor Force; ““Let me say in no uncertain terms: The U.S. condemns these acts and condemns the failure to condemn these acts.”

Biden later met with Palestinian Authority leader Mahmoud Abbas. Not only did the Palestinian leader not condemn the at

tacks, but he blamed Israel for the attack, as well as all the other recent terror attacks done by his people.


Meanwhile, his Fatah party celebrated the killing of the American on its Facebook page and on PA TV, according to Palestinian Media Watch.

The Iranian Ambassador to Lebanon, Mohammad Fateh Ali, said Tehran announced he will give $7,000 to families of “martyrs of the intifada in occupied Jerusalem” and  “$30,000 to every family whose home the occupation has demolished for the participation of one of its sons,” reported the times of Israel.

Several news outlets, including the French news agency , reported that the spokesman for Palestinian Authority President Mahmoud Abbas, Abu Rudeina, stated that financial assistance to such families is the purview of the Palestinian Authority, and that Iran should “send this money through official channels to the (PA’s) Martyrs and Prisoners Foundation rather than relying on informal and circuitous routes.”

This confirms that the Palestinian Authority is the one who pays the terrorists, and families of the terrorists. They want Iran to give them the money, not give it to the families directly.

What is the response of the US in this fight over who will fund the terrorists that kill innocent Israelis and Americans? You won’t hear this on the news. The Administration is silent.

Ballistic missiles were test fired by Iran twice within one week, on March 8 and 9, 2016, one with “Must Destroy Israel” in Hebrew written on its side.

The March 9 missile fired was a longer range missile, with a range of 2000km, which is in range of Israel. It violated UN resolutions, but not the famed Iran Nuclear deal. Ballistic missile restrictions were taken out of the Iran Nuclear Deal negotiations at the last minute with John Kerry’s blessings.

In early testimony on the negotiations of the Iran Nuclear Deal, Undersecretary of State Wendy Sherman had assured Congress that Iran’s ballistic missiles would be addressed. They were not.

The Ballistic missile issue was removed from the negotiations in fear that that “overloading the agenda” would jeopardize the agreement, according to an August 2015 analysis by ArmsControl.org. Instead, the UN Security Council implemented Resolution 2231 in July 2015, which was supposed to curb Iran’s ballistic missile activities. This Resolution was in addition to similar UN Resolution’s passed in 2006 and 2010.

This has not stopped Russia, Iran’s primary arms supplier. Russia has used its naval base in Syria to supply large and sophisticated weapons systems to Iran in support of the war Iran and Syrian President Assad have waged on the Syrian people. (This war on the Syrian people by Assad, Iran and now Russia, has killed 250,000 and displaced 11 million people.)

After Iran test fired a medium range ballistic missile in October 2015, the US Congress passed sanctions on businesses and individuals that are involved in Iran’s missile program.

Soon after the signing of the Iran Nuclear Deal which released billions of dollars of Iranian frozen assets, Russia reinstated a contract to supply Iran with a sophisticated surface to air missile system, the S-300. It can shoot down missiles and aircraft up to 248 miles away. This sale was done in spite of UN Security Council Resolutions.


Iran claims the S-300 did not violate the UN Sanctions because it was a system for defense, not aggression. Israel and the US know the system can be used to protect Iranian nuclear sites from air strikes. Which makes one ask, “Why buy an expensive missile defense system if you aren’t going to build anything that needs to be bombed?”
A “missile defense system” that can shoot down in-coming missiles can also shoot down aircraft. This is a big concern for Israel.

According to the Times of Israel,

“During the meeting, Netanyahu told Putin that Iran and Syria have been arming Hezbollah with advanced weapons and missiles, thousands of which are directed at Israeli cities, and that Israel would continue to target arms transfers to the terrorist group positioned on Israel’s northern border.” 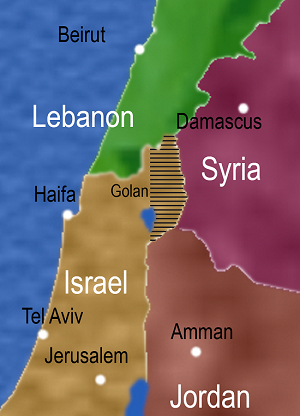 Israel, over the previous year, had conducted multiple air strikes in Syria which took out truck convoys transferring large Iranian weapons to Hezbollah. Many of the weapons shipments were Russian made.The Israel air-strikes in Syria on these weapons convoys was not reported by the media.

Syria President Assad did not criticize Israel, or publicly condemn the strikes, knowing the air-strikes were not affecting him, but instead were specifically strikes on weapons going to Hezbollah in Lebanon.

Lebanon sits on Israel’s northern border, shares a large border with Syria, and is the base of Iran’s terror proxy Hezbollah. Hezbollah militias are heavily involved in the Syrian war on Israel’s eastern border and have close proximity to northeastern Israel and the Golan Heights buffer zone.

On March 7, 2016, it was announced that Russia canceled the deployment of the S-300 air to missile defense system to Iran.

Despite Iran assuring Russia they would stop supplying Hezbollah, Israeli intelligence confirmed that Hezbollah had received S-22 surface to air missiles. Israel had the pictures to prove it, confirmed by Russian pilots.

“Russian pilots flying over Lebanon and Syria, as well as Russian anti-missile radars, have detected SA-22 systems in certain areas of Lebanon in which Shiite control is predominant.
Russia recently finished supplying 24 SA-22 systems to Iraq and made contracts with several countries such as Algeria, Jordan, Oman, Syria and the United Arab Emirates for additional deliveries of the system.
A SA-22 operated by the Syrian Armed Forces was reported to have shot down a Turkish RF-4E during a reconnaissance mission near Latakia on 22 June 2012.”

Hezbollah, the terrorist organization on Israel’s northern border could use surface to air missiles to threaten commercial aircraft entering Israel. Israel will not tolerate that threat.

Can Iran be stopped?

Iran is facilitating the attacks on Israel from within Israel, with rhetoric and finances to terrorists in Gaza and the PA in the “West Bank.” All the while, Iran is preparing for the attack from Israel’s borders, from Lebanon, from Syria as well as directly from Iran with ballistic missiles.

Will the US have the wisdom, strength and fortitude to recognize what is happening? Does the US Administration have the backbone to do something about it? We can only pray the next administration will.