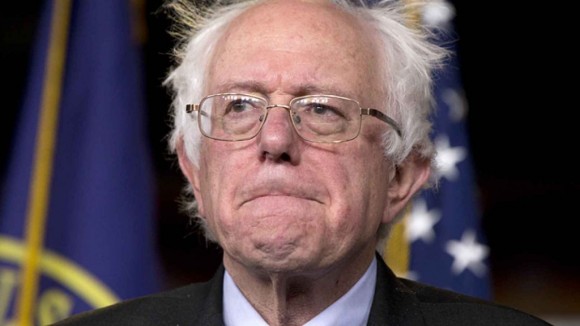 Democratic presidential candidate and Senator Bernie Sanders has finally been exposed as the hard-core communist he is. It happened at the debate in Miami on Wednesday night, hosted by Univision and The Washington Post, and broadcast on CNN.

On Thursday, CNN trumpeted the news from the debate that Sanders had refused to disavow his previous support for the Castro dictatorship in Cuba. Instead, he had reverted to anti-American nonsense while smearing a Democratic president named John F. Kennedy in the process.

As we have been saying for months, “democratic socialism” is just another name for communism.

Until that point, Sanders had been riding a wave of support from foolish Democrats who thought socialism was somehow different than communism, and that Sanders didn’t favor a dictatorship of any kind. He had spoken of socialism in places like Denmark. He was seen as the friendly face of “democratic socialism” with a powerful message of taking it to the so-called “one percent.”

But on Wednesday night, the real Bernie Sanders came through loud and clear.

Hard-core Marxists had been rallying around the Sanders campaign for months. Alan Maass, the editor of SocialistWorker.org, had said,“…the Bernie Sanders campaign for the Democratic presidential nomination has done more than anything else to bring the discussion of socialism into the mainstream.”Maass was ecstatic that “the opinion polls tell us that more and more people are identifying with socialism, or at least preferring socialism over capitalism…”

It was true. A poll of 1,000 likely Democratic voters by the American Action Forum (AAF) found that 57 percent answered “positive” to the question, “Do you think socialism has a positive or negative impact on society?”

This was happening because news organizations had not explained how socialism makes people poor and dependent on government—and murders those who get in the way of the Marxist planners. Hence, in the Fox News Democratic presidential town hallon Monday night, even moderator Bret Baier highlighted how Sanders is considered “honest and trustworthy” in opinion polls. This followed Sanders’ claims that he would control the national debt by giving people free health care and college.

During that town hall, when asked how he would get his proposals enacted into law, Sanders said, “I was the chairman of the Senate Committee on Veterans’ Affairs. Working with people like John McCain, Jeff Miller over in the House—he was chairman in the House Republican. We put together the most comprehensive veterans’ health care bill in the modern history of America, okay?”

A new health care bill was needed because the socialist VA health care system failed veterans. We have pointed out that Sanders’ pitiful performance as chairman of the Senate Veterans Committee came under serious scrutiny by CNN and other media for defending the VA bureaucrats, putting their interests above the veterans they are supposed to serve.

It’s true that Sanders, who had become chairman of the Senate Veterans Committee in 2013, had worked with Republicans to craft a bill designed to fix the problems. But after playing down the serious nature of the scandal, Sanders was forced to recognize, under pressure from Republicans, that the government-run VA health care system could only be saved by giving patients a private health care option.

We had previously reportedhow Fox News groveled to Sanders to get him to appear on the town hall. It took several more weeks to get Hillary Clinton to agree to appear. While Baier asked Mrs. Clinton some tough questions, the appeasement of Sanders continued. Baier failed to ask about such topics as Sanders’ membership in a communist Israeli kibbutz called Shaar Haamakim that was dedicated to mass murderer Joseph Stalin, and whose members celebrated May Day with red flags.

But during Wednesday night’s debatein Miami, the issue of Sanders’ support for communist totalitarian regimes was brought up. It will prove to be a major turning point in the campaign. Univision anchor María Elena Salinas said to Sanders: “In 1985, you praised the Sandinista government and you said that Daniel Ortega was an impressive guy. This is what you said about Fidel Castro. Let’s listen:”

Sanders: “You may recall way back in, when was it, 1961, they invaded Cuba, and everybody was totally convinced that Castro was the worst guy in the world. All the Cuban people were going to rise up in rebellion against Fidel Castro. They forgot that he educated their kids, gave them health care, totally transformed their society.”

The “they” Sanders was referring to was the anti-communist U.S. presidency of Democrat John F. Kennedy, who was determined to overthrow Castro. The evidence shows that Kennedy was killed by a Soviet-Cuban conspiracy involving Marxist “Fair Play for Cuba” member Lee Harvey Oswald. A Palestinian Marxist Killed JFK’s brother Robert.

Sanders, the independent-turned-Democrat, had shown callous indifference to the anti-communism that used to dominate the national Democratic Party. He seems oblivious to the evidencethat Castro was involved in the assassination of President Kennedy.

Salinas asked, “In South Florida there are still open wounds among some exiles regarding socialism and communism. So please explain what is the difference between the socialism that you profess and the socialism in Nicaragua, Cuba and Venezuela.” Socialism is so successful in Venezuela that the currency is worth less than toilet paper, which is in short supply.

When Sanders failed to answer the question, Salinas shot back: “Senator, in retrospect, have you ever regretted the characterizations that you made of Daniel Ortega and Fidel Castro that way?”

This exchange then took place:

Salinas: In retrospect, have you ever regretted the characterizations of Daniel Ortega and Fidel Castro that you made in 1985?

Sanders: The key issue here was whether the United States should go around overthrowing small Latin American countries. I think that that was a mistake…

Salinas: You didn’t answer the question.

Sanders: …both in Nicaragua and Cuba. Look, let’s look at the facts here. Cuba is, of course, an authoritarian undemocratic country, and I hope very much as soon as possible it becomes a democratic country. But on the other hand…it would be wrong not to state that in Cuba they have made some good advances in health care. They are sending doctors all over the world. They have made some progress in education.

Except for the rather vague and misleading reference to Cuba being “an authoritarian undemocratic country,” it was noteworthy that Sanders had not one word of criticism for the Castro dictatorship.

Sanders talks a lot about non-intervention. In fact, however, Sanders supported NATO’s bombing of Yugoslavia in 1999, an illegal and unconstitutional war waged by President Clinton.

On the matter of Cuba, former Secretary of State Hillary Clinton was prepared, coming back during the debate to say, “I just want to add one thing to the question you were asking Senator Sanders. I think in that same interview, he praised what he called the revolution of values in Cuba and talked about how people were working for the common good, not for themselves. I just couldn’t disagree more. You know, if the values are that you oppress people, you disappear people, you imprison people or even kill people for expressing their opinions, for expressing freedom of speech, that is not the kind of revolution of values that I ever want to see anywhere.”

An anti-communist Hillary had suddenly emerged on the scene. We all know it’s about getting votes in Florida, but it was a decisive moment nonetheless.

The day after the debate, the Hillary Clinton campaign let loose,notingthat Sanders “has a troubling history of admiration for the Castros.” The headline over the item on the Clinton-for-president website blared, “Bernie Sanders just refused to disavow his past support for Fidel Castro.” Among other things, Sanders had called Cuba “a model of what a society could be.”

Referring to the poll on Democratic Party support for socialism cited earlier, an editorial in Investor’s Business Daily asked, “How could average Americans of a supposedly mainstream political party throw their lot in with a creed that’s responsible for more human misery and poverty in the world than any other? It boggles the mind. Socialism, and its evil twin, communism, murdered well over 100 million people during the last century, a scale of slaughter unmatched in human history.”

The answer is that some people, like Sanders, deliberately try to separate socialism from communism, despite the fact that the father of both is Karl Marx. Analyst Trevor Loudon notes that so-called “democratic socialism,” as preached by Sanders, is simply a euphemism for socialism. “Socialism is the last stop on the road to Communism,” he notes. The Marxist dialectic is said to produce the final stage of communism through struggle or conflict.

Some people get confused because they think that Communist China has abandoned both socialism and communism in favor of capitalism. Those who doubt that China is still communist should take a look at the recent Wall Street Journal articleentitled, “China’s Xi Jinping Puts Loyalty to the Test at Congress.” It’s all about enforcing loyalty to the Chinese Communist Party. The communists are using capitalism to strengthen communism. They consider it another phase the country has to go through to achieve the highest stage of communism.

One of Ronald Reagan’s favorite jokes was about two Russians walking down the street, and one asks, “Comrade, have we reached the highest state of Communism?” The other replies, “Oh, no, I think things are going to get a lot worse.”

This is the brutal and bloody record of socialism and communism.

Yet our media let Sanders run around the country talking about socialism being “democratic.”

Our media have tried to get around this question by framing the issue as one of “income inequality.” It’s just another term for Marxist class warfare.

Now we know that when Sanders talks about imposing socialism on the American people, he’s talking about a dictatorship. Thanks to Univision and anchor María Elena Salinas for bringing out the facts in this case.


This article was originally published on Accuracy in Media (AIM.org)
If you would like links to the sourced articles, please see the original publication.