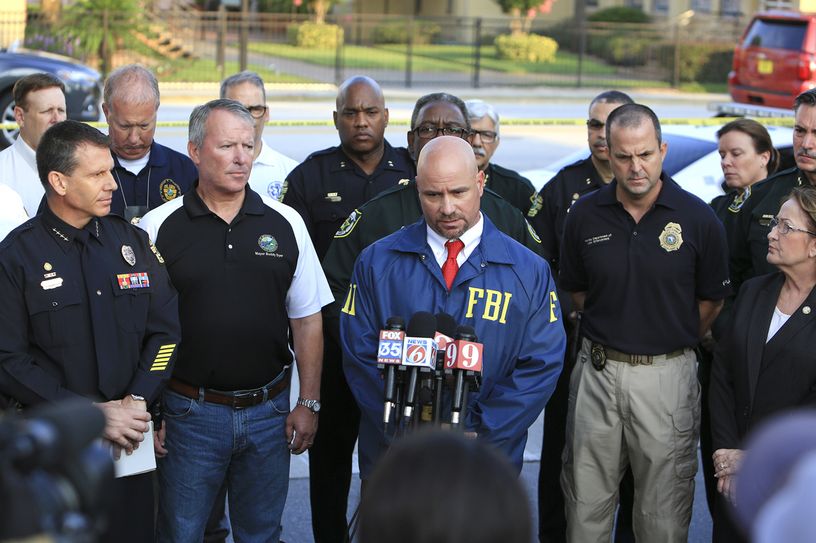 r Mateen targeted The Pulse nightclub in Orlando in the early hours of Sunday morning June 12. Before he entered the club, he called 911 pledging allegiance to ISIS, mentioning the Boston bombers, according to CNN. Fox news reported that the President was briefed by the FBI Director and ISIS is officially claiming responsibility for the attack.

The “premier gay nightclub” of Orlando at 2am was filled with over 300 patrons in a Latin Night celebration that included performances by drag queens, male performers that flamboyantly dress as women. Carrying a high powered assault rifle with high capacity magazine and a hand gun, Omar Mateen showered the dance floor with bullets, killing at least 50 patrons with over 50 more wounded, some seriously. Those on the scene said that at first they thought the noise was part of the music, until they saw bodies falling to the ground.

There was a police officer on the scene that encountered the shooter but was forced to retreat when hostages were taken. The SWAT team arrived to rescue the 30 hostages, set off an explosive at 5am and killed the shooter. They originally reported only 30 dead. Later, after making sure there were no explosives in the building, 50 total bodies were found inside the club. The caliber of the assault rifle was said to have been so strong that limbs were severed from victims.

The gunman was Muslim and reported to have been investigated for relationships with possible radicalized individuals in the past, was known to the FBI as late as 2013, but the investigation was dismissed. Omar’s father was interviewed and was shocked, said his son was not radicalized, but that Omar had been in Miami a few months earlier and was extremely upset when he saw two men kissing in public.

The Orlando massacre took place just one week after the famed event “Orlando Gay Days,” an annual event that draws up to 170,000 gay vacationers to Orlando and its theme parks. Each day a different theme park including Sea World, Universal Studios as well as Disney theme parks are designated to be visited by thousands of the gay community wearing red shirts. The “red shirt days” are not sponsored by any theme park, but attendance is coordinated by the organizers of the “Gay Days” events. The event happens the first week of June every year for 26 years.

Even as the local Orlando news reports that the gunman yelled “Allah Akbar” and pledged allegiance to ISIS, will the US government try to call this a hate crime and blame it on the gun laws? In his press conference, President Obama called it an “act of terrorism and hate.” The President said “hate” four times in the press conference, mentioned the assault weapon, but did not mention radical Islam or any motivation the shooter may have had.

It is being investigated by the FBI as an “act of terror” with an ISIS connection, but how long will it take the Administration to make the primary issue about assault weapons and gun rights? Omar was licensed to carry a gun as he was employed by a large security firm, and the ATF reports that he did purchase the guns legally in Florida.

The root source of the attack was his connection with ISIS and their executions of homosexuals, not the guns laws in Florida. However, it should be asked how a man that had at one time been on the FBI’s radar was not blocked from legally making a purchase of an assault rifle.

Later the same day, a man was arrested with a car full of arms and explosives on his way to a gay pride parade in Los Angeles. Is this also a call from leaders of radical Islam to attack the gay community? Or will the government call it just another “hate crime with guns” dismissing all connections to radical Islam? As of this writing, the FBI was claiming there was no connection between the Orlando shooting and the planned attack in Los Angeles.

Homosexuality is punishable by death in seven Muslim countries. Numbers of gays have been reported thrown from rooftops in Iraq and Syria by ISIS. After similar executions in 2015, Fox News reported that ISIS was known to send militants into neighborhoods to ‘flirt’ with men to public expose anyone who may be gay, and then execute them.

In 2014 in Seattle, Musab Mohammed Masmari, pled guilty to trying to burn down a gay nightclub on New Year’s Eve. He told an FBI source that homosexuals “should be exterminated.” In July 2014 two homosexual men were assassinated by a radicalized Muslim, Ali Muhammad Brown that coaxed the men outside of a gay nightclub and then executed them.

According to The Clarion Project,

“The Reliance of the Traveler, an authoritative manual on Sharia endorsed by Egypt’s Al-Azhar University and the U.S.-based International Institute of Islamic Thought, proscribes the death penalty for homosexuals.

Section p17.1 states, “There is a consensus among both Muslims and the followers of all other religions that sodomy is an enormity. It is even viler and uglier than adultery.”

Section p17.3 quotes the Prophet Mohammed as saying, “kill the one who sodomizes and the one who lets it be done to him.” It also says that lesbianism qualifies as adultery."

In the days ahead, especially in the month long Islamic holiday of Ramadan, we need to listen closely to the FBI director and law enforcement. We need to keep our ears open to potential terror attacks, like the one in Los Angeles that may be thwarted. And most importantly, we need to find a way to keep political correctness out of the tragedy and focus on the root cause which is radical Islam, while praying for the victims and their families.

We can no longer afford to ignore the threats of ISIS on our homeland.

The Obama administration is determined to deny that we are in a “Global War on Terrorism” and at war with Islamic Extremism.

Now that ISIS has killed 50 American citizens on the US homeland in the largest terror attack since 911, we must demand that our government declare not only that the US is “at war”, but once and for all declare who the enemy is.

Sources:
Much of the information in this article was taken from live on air reporting by Fox News, ABC news and other major networks.
Other sources:
Muslim Extremist Arrested for Murder of Gays in Seattle; The Clarion Project
A Seattle Gay Bar & the Brunei Sultan: What's the Connection? The Clarion Project
Death Plunge: ISIS throws gay men off buildings under guise of Sharia law; Fox News
http://www.cnn.com/2016/06/12/us/orlando-nightclub-shooting/
https://touringplans.com/walt-disney-world/events/gay-days#
http://www.economist.com/node/21546002;
http://www.cbsnews.com/news/isis-persecution-gay-men-murder-lgbt-muslim-society/
http://lawnewz.com/high-profile/gunman-used-ar-15-style-rifle-in-mass-shooting-what-are-floridas-gun-laws/