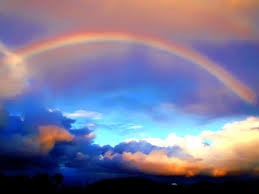 This is what the rainbow represents:  a covenant between God and Man. Today, people who mock God and flaunt their disgust at His ways use the rainbow to represent a behavior that God calls “detestable” (Leviticus 18:22; NIV); which Christ referred to as “unclean,” along with other types of sins (referring to sexual immorality- Matthew 15:19; NIV); and the Apostle Paul strongly condemned as “depravity,” “godlessness,” and “wickedness,” among other strong descriptions (Romans 1:18-32; NIV).

The rainbow flag is simply the mockery of God Almighty, Christ our Lord.

In light of the fact that the Orlando terrorist attack was perpetrated at a place where God is reviled, how should we view the attack? For what it is:  a terrorist attack carried out at the behest of a foreign Muslim terrorist organization. This terrorist killed Americans. While our Divider in Chief and other leftists and liberals, for political gain, callously want to make the attack about the sexual behavior of the victims, the fact is that this was an attack on the United States of America.

Did we call 9/11 an attack on entrepreneurs and wave a flag with a dollar sign on it? No. We shed tears for the innocent Americans (and foreign nationals) who lost their lives. They were innocent people. Now, across America, foolish liberals, including intellectually shallow mayors, governors, members of Congress, and other officials want to take advantage politically of this terrorist attack. Notice that it is not about terrorism, rather a “mass shooting.” Was 9/11 a “mass airplane attack?”

Liberals and leftists (there is a difference of degree) want to divide Americans for their own purposes. By allowing them to hijack the language (“mass shooting”) and to set the agenda (anti-Constitutional; pro-homosexual), they take us further down the path of a nation that has already collapsed morally. (If you do not believe that America has collapsed morally, please explain to me the destruction of marriage for the legitimization of homosexuality- what the American Psychological Association called a mental disorder until they caved in to political pressure in the 1970s.)

Let me be clear, to use the Divider in Chief’s expression:  I will never fly the flag of the God-haters. Homosexuality and religious liberty cannot co-exist, as confirmed by Obama’s EEOC chief (see my February 9, 2015, column on this website).

The terrorist attack in Orlando was in a “gun free zone,” which I refer to as a “self-defense free zone.” That is where almost all mass shootings occur, and it is where this and future similar terrorist attacks will occur. The frightening issue before us is not guns, rather terrorism.

On the subject of guns, why should you and other law-abiding citizens be punished for the acts of someone else? This destruction of liberty is the “logic” of a liberal. That is what “common sense gun reform” really is. It is “common sense” if you do not believe in liberty.

What is the root cause of the Orlando terrorist attack? Let us look at it from this angle:  If we removed the gay bar, the terrorist would have hit another place. If we removed the guns, the terrorist could have blocked the doors and then burned down the building or planted bombs. Remove the believer in the Qur’an and... we are having conversations and Facebook posts about other subjects. There would not have been a terrorist attack in Orlando without Islamic Extremeism and its follower. That should be the topic of conversations- if we truly care about stopping this from occurring again on our soil.

How should we view the homosexual victims? We should hate the sin but love the sinner. We should pray for the wounded and the families of the dead. And we should never, ever fly the banner of the godless. Never.

Hit your knees. America has collapsed morally, and today we are being asked to embrace that moral collapse.

No matter what individual people endure, my strength does not come from other people or government or siding with the majority. The banner of those who mock God will not fly over or represent me.