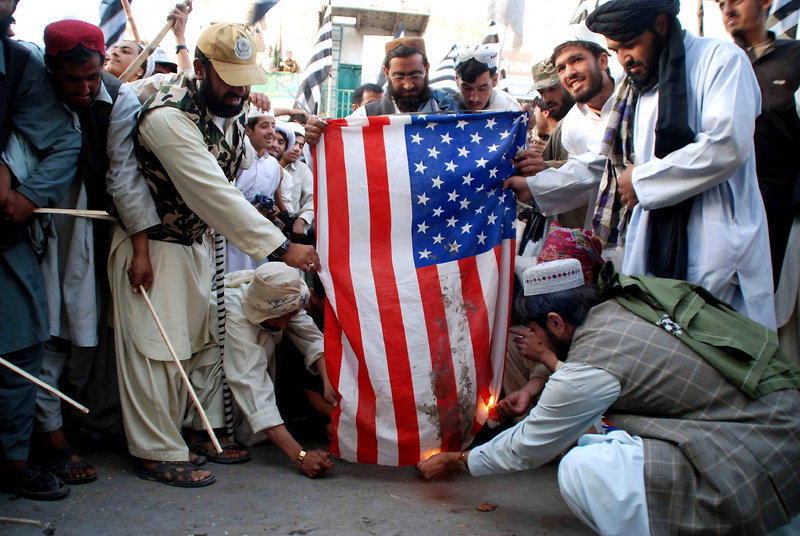 Omar Mateen is the latest mass murderer to emerge from the demonic world of Islamic jihadism.  He took it upon himself to murder 50 persons and wound 53 at a nightclub in Orlando, FL.  This writer is one of the numbed masses of people who have spent their entire adult lives witnessing mass atrocity after mass atrocity committed against Americans around the world and on U.S. soil by evil persons acting in the name of Allah. Actually, attacks by militant Islamists on Americans go all the way back to the administrations of John Adams and Thomas Jefferson.  Those attacks on American ships and sailors off the coast of what is today Libya were finally stopped by the Marines led by Stephen Decatur.

The “lone wolf” attacks of recent years are just what one would expect in the wake of the U.S. government’s failures to respond effectively to state-sponsored terrorist attacks over the past 30+ years.

During October 1983 241 U.S. troops were massacred in Lebanon by Hezbollah (as well as 58 French troops at a different location).  Pres. Reagan, for many citizens the very incarnation of the warrior spirit, nonetheless, by Feb. 1984 withdrew all remaining U.S. troops from Lebanon.  Thirty years later, relatives of the soldiers killed in that attack were awarded $2.65 billion in reparations in a lawsuit against Iran, but have yet to see any of that money.

At the same time, Pres. Obama has negotiated a deal with Iran releasing $150 billion in frozen Iranian assets to Iran from various financial institutions as part of a new so-called detente with that malignant terrorist nation. And, by the way, Iran is still on our State Department list of state sponsors of terrorism.

Fast forward to 1996, thirteen years later, part of a housing complex where Americans lived in Khobar, Saudi Arabia was bombed by a truck carrying the equivalent of 20,000 tons of TNT.  On that occasion "only" 19 Americans were killed.  After intense investigation, again Hezbollah and Iran were blamed for the bombing by a U.S. court; however, payments were not made to the affected U.S. citizens.   It took 20 years before the mastermind of this attack was arrested, raising many suspicions about whether or not there has been a partial or total cover-up.

What was the Clinton response to the Khobar bombing?  Pres. Clinton released the names of Iranian covert operatives who were working in different countries, to undermine Iranian efforts to spy and sabotage throughout the world.

Nonetheless, in spite of Clinton's "success," Iran is still on our terrorist list, still arming Hezbollah with missiles to attack Israel, still developing long range missiles capable of attacking Europe or even the USA, engaging financially and materially with Hamas in Gaza, taking over Yemen, and asserting its control in Iraq which has a government dominated by Shi'ites and is a puppet state of Iran. Obviously, Clinton’s retaliatory strategy was ineffective.

Lastly, we engaged the Taliban in Afghanistan after 9/11 and toppled that pernicious government led by one-eyed Mullah Omar.  The Taliban was protecting Al-Qaeda, Al-Qaeda was dispersed, and Osama bin Laden went into hiding.  Pres. Bush declared victory.  A new democratic-style government was put in place.  Prime Minister Karzai was installed.  However, over time we learned that it was a new day for Kabul, the capital city, but not for that tribal, warlike country.  The Taliban were not defeated as Pres. Bush had passionately claimed, and the Obama administration in its usual prevaricating way is now calling the Taliban “insurgents,” not terrorists.

All of our Presidents, beginning with Reagan, have been passive in relation to Islamic terrorists.  We have withdrawn troops, set up failing governments, back-pedaled on aggressive military options, and now, in recent years, adopted “nation building” strategies. The US has actually held out the right hand of friendship to the very people – the government of evil Iran -- who want to bite that hand.

So, again, the question must be raised:  Are we led by individuals who do not have the moral and political will to solve this problem as Thomas Jefferson did, or as the allies did in World War I fighting against the Islamic Ottoman Empire that was the ally of the Central Powers against the U.S., Britain, and France? Or has a just God withdrawn his favor from the U.S. and allowed the demons to fly out from the Pandora’s box of Islamic hatred?