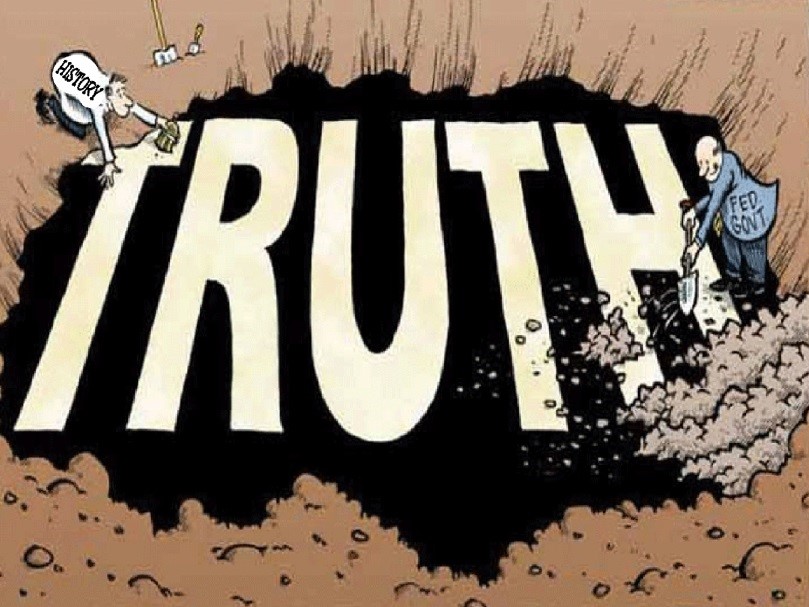 The truth is that in the United States 580 terrorists motivated by radical Islam have been convicted or charged since 911. However we have seen over the last six years the attempt of the Obama Administration and Hillary Clinton to rewrite truth and history. The Administration with eager assistance from the press is pretending and selling that the root problem, the growth of radical Islamic terrorism, simply does not exist.

In 2008 the Holyland Foundation Trail  exposed in Federal Court a network of Islamic front groups in America helping to fund Hamas, a designated terrorist organization. A DHS official, Philip Hanley, started connecting the dots of the network of groups tied to Hamas, radical Mosques and future potential terrorists. After one of the groups, CAIR, approached the Administration, DHS officials were told to modify records that were being built. Later Hanley was ordered to delete 67 records related to a report on the Institute of Islamic Education, a key component of the case he was building.

The author of “See Something, Say Nothing," A Homeland Security Officer Exposes the Government’s Submission to Jihad”, former DHS agent Philip Hanley was a founding member of the Department of Homeland Security and later member of one of the DHS National Targeting Center’s advance units.

Get your copy here, via Amazon.
According to Hanley, both the San Bernardino shooters Mosque and the Orlando massacre shooter’s Mosque would have been exposed in this case. The case was shut down and the investigation blocked by the Clinton State Department and DHS because they felt it would offend the Muslim community.

How many times do we have to see the words “stop the investigation” and “deleted files” in the same paragraph with “the Clinton State Department?”

Former Congresswoman Michele Bachman, Congressman Louie Gohmert, and former Inspector General for the Department of Defense Joseph Smith all came together with Mr. Hanley at the National Press Club June 14. By June 21 Mr. Hanley was featured on Fox News’ “Hannity.”

The erasing of truth of the future threat was also spread to the intelligence community.

Another former DHS official, Rich Higgins, explained on Sean Hannity’s show on Fox News June 21st that the “tipping point” came in 2011. After a journalist had revealed the training methods of the Intelligence community regarding the growth of radical Islam, a directive came down from the top to scrub all references to Jihad, Sharia and radical Islam from training materials in the Intelligence arena. Any attempts to “connect the dots” between Islamic groups tied to terrorist groups in the United States and Mosques with potential for radicalization was halted for the FBI and other law enforcement.

Steven Emerson, a foremost authority on homegrown terrorism, directs the Investigative Project on Terrorism. They monitor a network of Islamic groups in the United States with ties to the Muslim Brotherhood. He told The Washington Times in 2013,

“Numerous experts on Islamic terrorism like myself (that) had given 143 lectures at the FBI, CIA, were banned from speaking to any U.S. government counterterrorism conferences,” “Instead, these agencies were ordered to invite Muslim Brotherhood front groups.”

President Obama with Hillary by his side mastered the veil of distraction to cover the massive failures in Middle East foreign policy that led to an exponential growth in terrorism throughout Europe and the United States.

After the Benghazi tragedy, the Administration refused to call it terrorism and blamed it on demonstrators. They later tried to re-write that history. But of all the storylines the Administration could have used to cover the truth they chose “a terrible American that made a video insulting Islam is what caused the demonstrators to attack.” Hillary Clinton even went as low as to tell a grieving mother watching her son’s casket arrive; “we’ll get the person that made the video.”

In testimony before the Intelligence Committee in June 2016, after the Orlando massacre by an ISIS inspired terrorists, CIA Director John Brennan addressed the truth that Hillary Clinton has been trying to cover up from her disastrous Libya policy;

“Further, as we have seen in Orlando, San Bernardino, and elsewhere, ISIL is attempting to inspire attacks by sympathizers who have no direct links to the group. Last month, for example, a senior ISIL figure publicly urged the group’s followers to conduct attacks in their home countries if they were unable to travel to Syria and Iraq.

At the same time, ISIL is gradually cultivating its global network of branches into a more interconnected organization.
The branch in Libya is probably the most developed and the most dangerous.
We assess that it is trying to increase its influence in Africa and to plot attacks in the region and in Europe.”


Fortunately, there are some serious legislators in Washington on both sides of the aisle more focused on solving the problem than covering it up.

Democrat Senator Dianne Feinstein is vice-chair of the Intelligence Committee. While she is well known for promoting gun control and banning assault weapons in the past, she is shifting the focus to where it belongs- on to the threat of radical Islamic terrorists.

Senator Feinstein appeared on Face the Nation June 29, a week after the Orlando shooting. Her focus was to recognize the enemy and stop future terrorists which are infiltrating the borders from being able to obtain weapons.

“This is really a national security issue, it isn't a gun control issue, and let me explain why. The FBI has about a thousand ongoing investigations; John Brennan (CIA Director) told the Intelligence Committee on Thursday in an open hearing that ISIL is actively pursuing operations to commit attacks in the west and bring people into Western countries, whether it's through immigration, whether it's over the Border, or in any other way.”

“I think as we look at life as it is today and the possibility of attack, we here in judiciary, we here in intelligence, the FBI in its investigation after investigation, and if you consider the fact that over 500 arrests and convictions for providing material support or conspiring or one of these things has occurred, you know that these things are going on."

"The only way we have of stopping them is good intelligence, plus a kind of net that will pick up foreigners on the watch list and this is important - 99.9% are foreign, less than a half of 1% are Americans, so this essentially is the watch-list  which covers the no-fly list, the ‘selectee’ list and others. It is mainly foreign names given by foreign intelligence agencies and other law enforcement.”

Senator Feinstein's legislation would have put foreigners that were suspected terrorists on the list that would prevent them from buying guns. Anyone who had been investigated by the FBI would be on the list so it would have picked up the Orlando shooter, or at least red flagged the FBI that he had bought guns. It failed to pass the Senate on June 20th, as did three other attempts at strengthening laws to prevent future terrorists from buying guns. In an election year, no gun control reforms can pass.

America is in desperate need of not only truth and honesty from our media, but also common sense bipartisan action from our leaders.  Action on long term strategies is required if we are to survive in this war that is on our shores. We are at war with soldiers fighting for an ideology that is taught on the internet that we have no control of, and in radical religious circles that our intelligence community is not allowed to profile.

“It’s not about guns, but about an ideology”, was a point strongly made by Senator Jeff Sessions on Fox News Sunday June 19th.

If the same leadership that has brought us to this point is put back in charge political correctness will continue to handcuff our law enforcement and the media will continue to manipulate the public’s attention away from the problem. We will all then be sitting ducks in the water, not knowing from what direction the next attack will come.