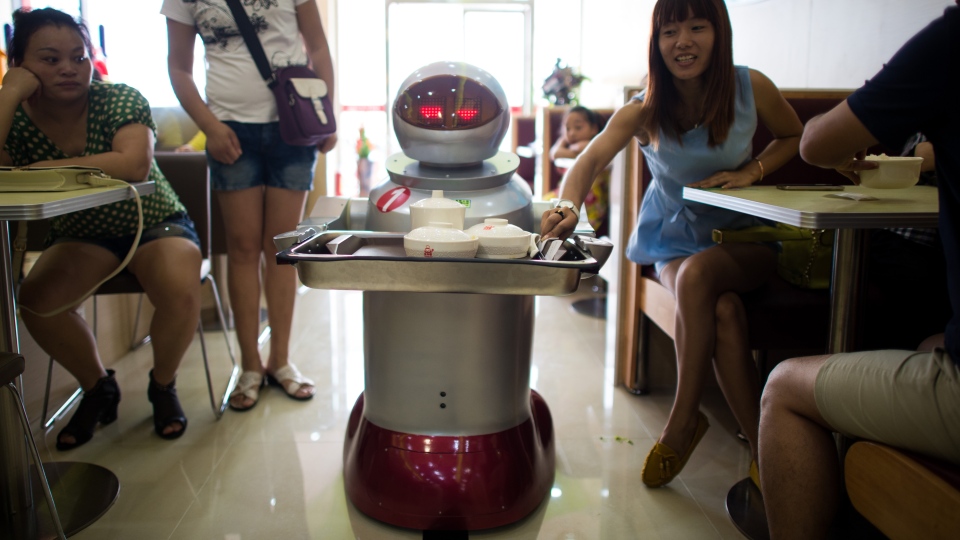 Now that a $15-an-hour federal minimum wage demand assuredly will be in the Democrat Party platform, it’s time for us to recognize the benefits of such a minimum wage. Predictions of doom, gloom, and Armageddon if the minimum wage is doubled illuminate only part of the picture. There’s a bright side of raising the federal minimum wage from its current $7.25-an-hour.

What’s missed amongst all of the numbers crunching, hand-wringing, and fear-mongering is that the advocates for a $15-an-hour minimum wage are making selfless sacrifices for the advancement of society. Because of these activists, in the not-too-distant future, every Wendy’s, McDonald’s, Jack-in-the-Box, Burger King- and every other major fast food chain that comes to mind- will have kiosks taking payments from customers, robots cooking burgers, and machines mopping floors. There will be a minimum human presence at any given fast food restaurant.

This change in the fast food industry will help bring about more high paying jobs in the technology sector of the economy. Others will be employed in high paying jobs to maintain all of that machinery.

The brave, selfless minimum wage workers of today are nobly giving up their jobs for the advancement of the American economy. Sen. Bernie Sanders is leading the way, encouraging the less educated among us to act without self-centered regard for themselves.

One finds it difficult to believe that businesses can double wages and survive- even multi-billion dollar fast food corporations operate on thin margins. Given the impossibility of keeping the same number of employees while doubling salaries, surely the leaders of this minimum wage movement understand the sacrifices they are making for the betterment of mankind. Surely they understand that, thanks to them, the already high premium on education will be even higher than it is now.

Once a large piece of the low end of the economy is removed, there will be fewer entry level jobs, thus the importance of education. Those $15/hr. jobs will be tough to come by, so the education competition will begin in a few years, with the rise of the machines.

A small percentage of people will maintain their entry-level jobs. Someone will still need to be present in case there is a mechanical glitch, and it might be easier to have a human clean the restrooms. They, too, will have their friends to thank- their unemployed friends- for their high wages (high relative to current wages). Naturally, all other wages will be forced to rise, which in turn will cause prices to rise, so while the few lower paid workers not laid off will earn $15/hr., the purchasing power of such a wage will be the same or similar to the purchasing power of $7.25/hr. today. Most of today’s activists, who will lose their jobs when they eventually win their battle, will earn $0/hr., at least in the free market. Welfare pays pretty good, though.

But enough of that boring, technical, economic stuff that nobody learns anymore, anyway. Back to the heroes of our story. The unemployed former minimum wage earners will have a lot of free time- free to read books:  learning about the American founding, even learning about economics. Ah, the irony of life.

The fast food industry is not the only industry that employs people at or near the minimum wage level. Janitors, for example, are often paid the minimum. Thanks to the sacrifice of today’s activists, the advances in robotics will lead to machinery cleaning office buildings and manufacturing plants. The increase in demand for this equipment will lead to more manufacturing jobs, which will lead, over time, to greater supply and more affordable machinery. Cheap robots will serve the unemployed former minimum wage earners. Ah, the irony of life.

The selflessness of these minimum wage activists is really quite stunning when the big picture of coming progress is considered. Those of us who are burger aficionados will appreciate the fact that our cheeseburgers will be cooked exactly the same every time. Perfect. Over and over. No misunderstandings of what condiments you want on the burgers. English as a fifth language will no longer be a problem. No human errors. Laud and applaud the activists for that!

Fast food workers will not be around to have the opportunity for malicious behaviors, such as spitting into the food of white customers, as Jesse Jackson admitted to doing when he was young.

More automation; more employment at higher wages; a better focus on education; activists helping a few of their friends to double their pay while most lose their jobs- pure selflessness; ushering in the future:  today’s activists are as pure as a mountain snowfall on a winter’s morning. They’ll be broke and unable to afford the gasoline to get to the nearest mountain range, even if they live in Denver, but they are certainly thinking further ahead than for which they are given credit.

The next time you see a Bernie Sanders supporter or activist pushing for the minimum wage to rise to $15 per hour, hold back your laughter and resist the urge to snicker at the economic ignorance. Instead, thank that person for helping to advance society forward, even if that person will be left behind. Besides, if you can afford a twelve dollar burger, you can afford to pay for a few more people to be on welfare.

And hey, the burgers will be perfect!