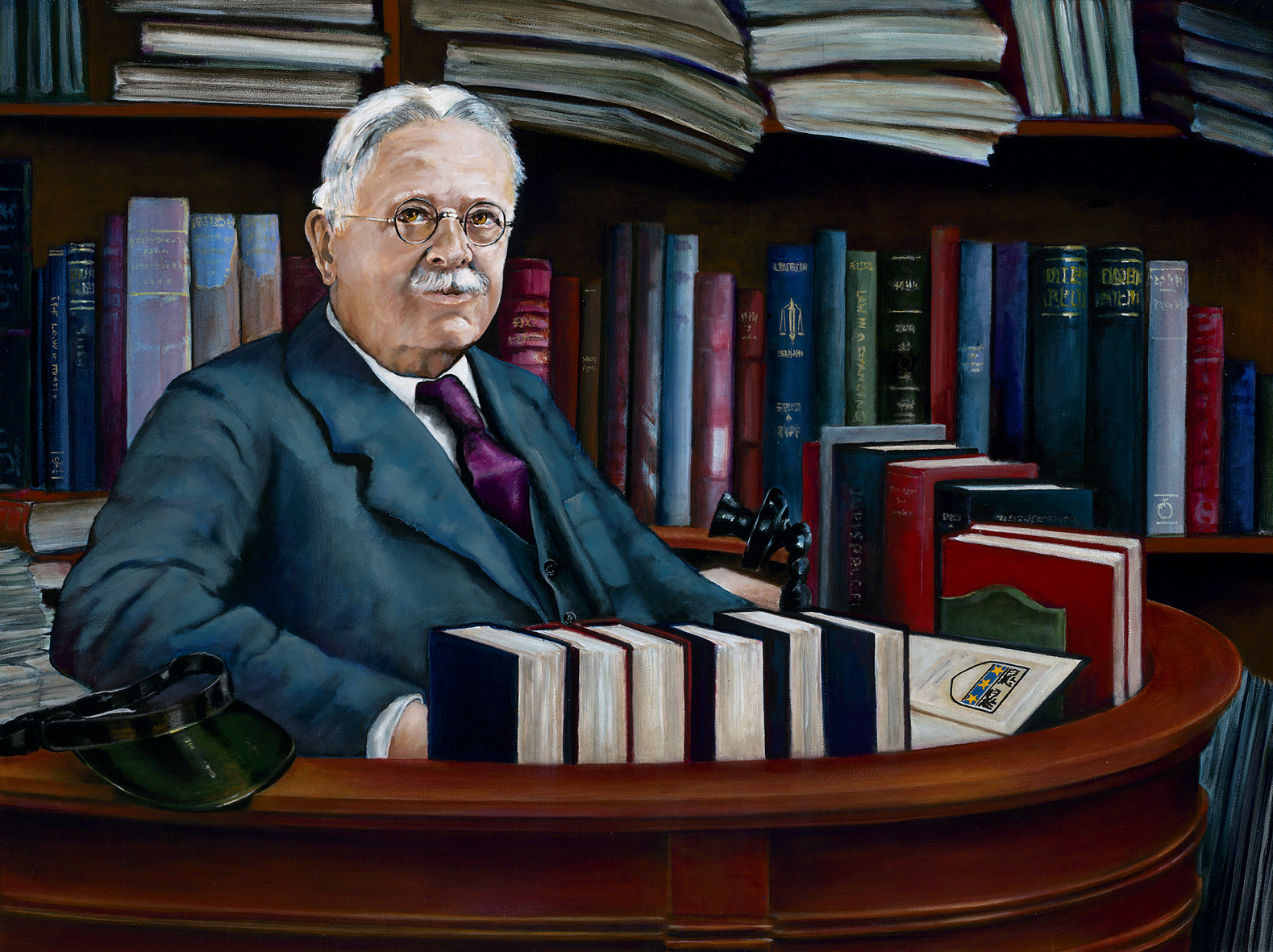 To accomplish the goal of driving our nation to destruction, there are three things the government must do. (1) Remove Christianity from the public square. (2) Remove Biblical morality from the law. (3) Remove God from the government. When these three goals are achieved the government will completely fill the voids it deliberately and diabolically created by supplanting Christianity with atheism, Biblical morality with immorality, and God with existential humanism, i.e., man as the center of a nonmoral universe. Welcome to the precursor that resembles Nazi Germany! It could equally apply to Communist Russia and China, or any other totalitarian regime.

Sounds unduly threatening, you say, but consider the legal philosophy that has led to our collapsing culture. To do so, it is not necessary to look any further than the influence of a single voice; that being Roscoe Pound. He served as the Dean of Harvard Law School from 1916 until he resigned in 1936, and then was appointed the first University Professor at Harvard, until he retired in 1947. Pound's writings were voluminous; however, only his core belief and its surrounding principles are of relevant interest. His main contention concerning the Common Law: “Let us think of the problem of the end of law in terms of a great task or great series of tasks of social engineering.”1

For this to take place, the understanding of the Constitution established by the Framers must be rejected: “No one will assert at present that the separation of powers is part of the legal order of nature or that it is essential to liberty.”2 This altered thinking was necessary to establish the judiciary as the source and force for social change. In what he termed, “The good side of spurious [deceitful] interpretation,” Pound laid out his plan for “social engineering.” It was based on, “the general popular demand for judicial amendment of constitutions, state and federal, under the guise [appearance] of interpretation.”3

When the Supreme Court considers a judicial opinion and acts like it is interpreting the Constitution, it is actually “good” for the Court to betray the people and give the appearance of interpretation, when in fact it is unconstitutionally usurping the legislative branch of government and amending the Constitution to accomplish a predetermined, oligarchic sociological desire.

Pound's justification for a sweeping change in constitutional law was astounding. He encouraged:

“From time to time more or less reversion to justice without law becomes necessary in order to bring the public administration of justice into touch with the changed moral, social or political conditions.”4

Like others of his ilk, Pound asserted that law must be, “in the hands of a progressive and enlightened caste whose conceptions are in advance of the public and whose leadership is bringing popular thought to a higher level.”5 All of this was to be accomplished by one profound modification in the idea of jurisprudence: “The state takes the place of Jehovah handing the tables of the law to Moses.”6 Thus, through deceitful jurisprudence, the State becomes the omnipotent God, promulgating and installing its own debased, “changed moral” philosophy.


Pound's influence cannot be overstated as Thomas A. Cowan, Professor of Law, University of Nebraska declared:

“He gradually reworked the whole structure of American legal thought.”7 And, Paul Sayre, Professor of Law, New York University and Pound's biographer, expressed: “I hate to think what would have happened to juristic thought in this country if he had not been, since all the rest of us have been living off him on this score for some forty years.”8

The path of this reworking of “the whole structure of American legal thought” has led directly to America's current degenerate sociopolitical environment. For those who have lived long enough to the see the difference, the ever escalating speed with which our government has succeeded in perpetuating this devastating cultural decline is startling.

The difference is to be found not in an evolving Constitution, but in the hearts and minds of morally deficient Justices. The consequence of this moral debasement is directly related to the Supreme Court's failure in its obligation to uphold the Constitution, The Court has perverted the First Amendment, and in the process has deliberately pitted the State against the Church and has created an untenable, unconstitutional tension between the two.

This adversarial posture is revealed in numerous Supreme Court rulings. The proliferation of five to four decisions based on the same evidence indicates deep a seated antagonism against morality. However, the problem is greater than just being hostile, it is ideological madness. Do not be mislead. When considering who will be recommended to fill a vacancy on the Supreme Court, the primary concern is whether the individual holds to an ideology of good, or one of evil. Trying to couch this moral issue in other terms cannot hide the obvious.

While the Supreme Court is paramount in deceiving the public, it is not the only culprit. There are other participants at the highest levels of our government. For instance, Barack Obama has declared on various occasions, before and after his election as President,

“Whatever we once were, we are no longer just a Christian nation; we are also a Jewish nation, a Muslim nation, a Buddhist nation, a Hindu nation, and a nation of unbelievers.”9

Whatever his motive, this statement is nonsensical and reveals a dangerous disregard for what “a Christian nation” actually means. Dangerous, because Christianity is liberty's greatest protector and tyranny's greatest threat. Minimizing Christianity's importance by making it just one among many reveals an abysmal lack of knowledge of comparative religions and the true meaning of the First Amendment's religion clauses.

James Madison, the primary architect of the Constitution of the United States of America, in defense of that document, declared “that the safety and happiness of society are the objects at which all political institutions aim and to which all such institutions must be sacrificed.”10 He explained that this “aim” of “all political institutions,” (governments and their branches), and to that which they “must be sacrificed,” is founded on “the transcendent law of nature and of nature's God.”11 In other words, the Constitution of the United States can never—legally—be interpreted, in any way, that violates God's “Higher Law.”

Whenever some judge, or so-called expert professor of law opines that “original intent” of the Constitution cannot be known, do not believe them. Their problem is not about a lack of knowing the “original intent”, it is about despising the known “original intent.” This is because “original intent” will never allow “the state” to take “the place of Jehovah handing the tables of the law to Moses.” It can never sanction the lies and deceit that have advanced “social engineering.”

In 1826 the United States Congress was concerned about funding for public lands for Common Schools in several States. The Committee Report on this issue contained this sage advice: “Under a Government like ours, there should no where be left masses of mind, illiterate and humbled, over which, in an evil hour, some master spirit may exercise a fatal control. Ignorance is the bane of liberty.”12 (Emphasis added.) One of the primary concerns of the Congress to insure literacy was that “morals are taught, in Common [Public] Schools”13

One would have to be daft not to see that we live in “an evil hour.” And that there are a number of “master spirit[s]” desiring to “exercise a fatal control.” It should be obvious that it is not just important to know the truth of Christianity's integral relation to American law, it is absolutely essential. My book “IRREFUTABLE: Why Christianity Is the Irrevocable Foundation of American Liberty” presents this truth in a way that has never been approached before. It is the result of seven years of extensive research, with all quotes from primary sources. It is based on this axiom: “A refutable argument is nothing more than an opinion. An irrefutable argument is nothing less than the truth.” It is past time for dastardly opinions to be silenced by the irrefutable.