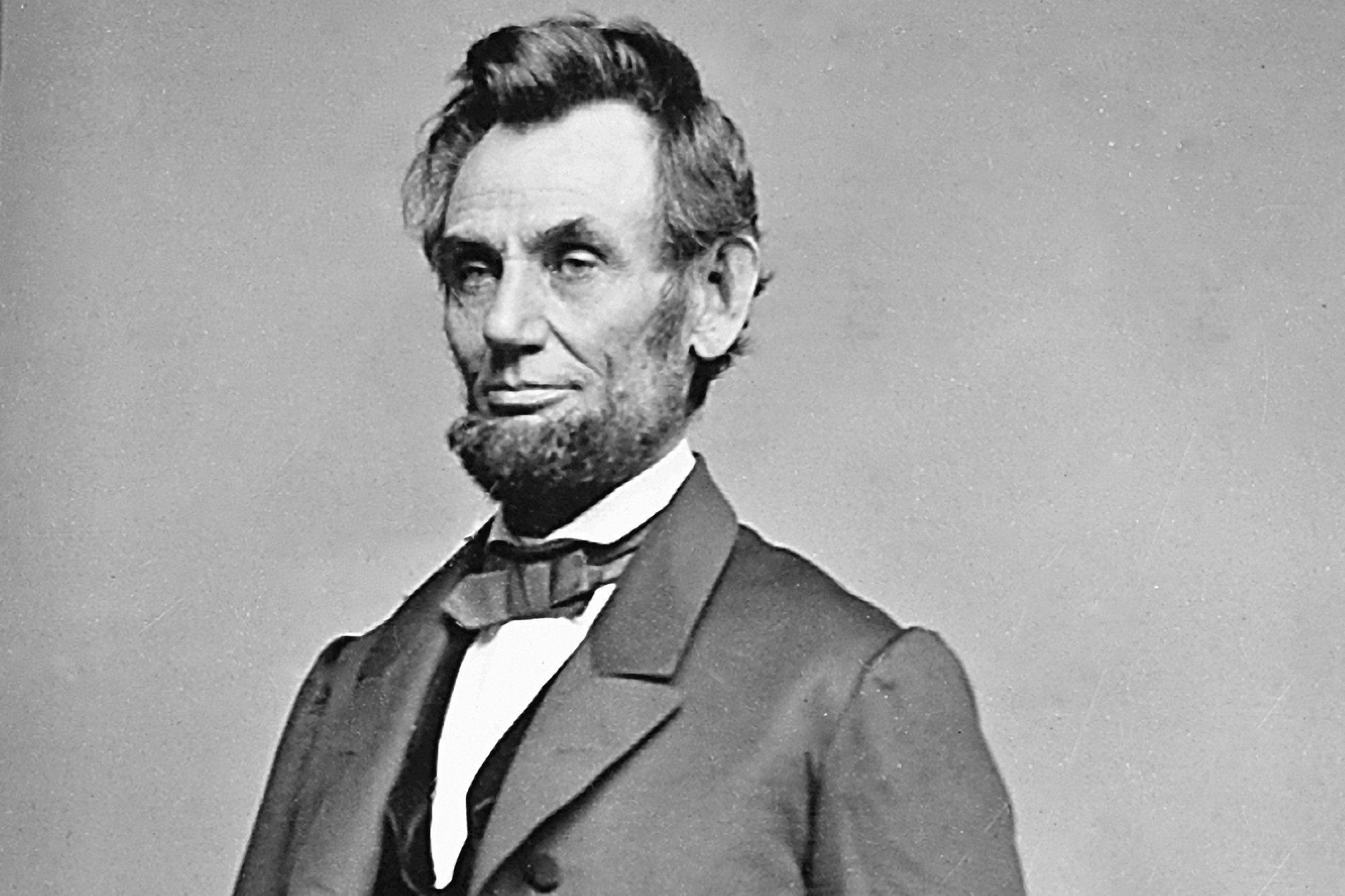 Especially in this age where non-serious thinkers abound, the importance of knowing history cannot be overstated. George Santayana (an atheist) remarked, "Those who cannot remember the past are condemned to repeat it."1 On this point he was correct, and condemned is the appropriate designate. But, in order to remember the past—outside of one's own experience—history must be taught. If not, condemned will lead to doomed.

When America was facing one of her greatest challenges, a humble, kind, self-educated, and insightful man, like no other, except for George Washington, appeared on the national political scene. Abraham Lincoln possessed a passion for liberty, not just for the ones who had it, but most importantly for the slaves who did not. This passion was exposed in his debates with Democrat, Stephen A. Douglas, in 1858. Lincoln, a Republican, challenged Douglas for the Illinois Senate seat. Douglas won the election, but Lincoln's speeches propelled him into prominence, and he was elected President less than three years later.

In Lincolns speech at Lewiston, Illinois, August 17, 1858, he recalled from the Declaration of Independence, "We hold these truths to be self-evident: that all men are created equal; that they are endowed by their Creator with certain inalienable rights; that among these are life, liberty, and the pursuit of happiness." To the men who created this grand document, "this was their lofty, and wise, and noble understanding of the justice of the Creator to His creatures."2 "They erected a beacon to guide their children and their childrens children, and the countless myriads who should inhibit the earth in other ages."3 Because, "they knew the tendency of prosperity to breed tyrants."4 In the future when these "self-evident truths" would come under attack, "their posterity might look up again to the Declaration of Independence, and take courage to renew the battle which their fathers began—so that truth, and justice, and mercy, and all the human and Christian virtues might not be extinguished from the land."5

Lincoln rightly described The Declaration of Independence as "our chart of liberty."8 Any philosophies and their accompanying laws that in any way deviate from this grand document are embodiments of tyranny. Our rights come from our Creator and not from man, therefore, any perceived right that attacks "Christian virtues" is an attempt to try to extinguish these virtues "from the land." This attack on liberty is becoming more apparent every day and its object is not just to "destroy that immortal emblem of Humanity—the Declaration of American Independence," but to subjugate the populace, as a whole, to the vile desires of a debased political elite.

Two years prior to his famous debates with Douglas, Lincoln delivered a stirring speech at the first Republican State Convention of Illinois at Bloomington. In this speech he stated, "No law, is a free law! Such is the understanding of all Christendom. In the Somerset case, decided nearly a century ago, the great Lord Mansfield held that slavery was of such a nature that it must take its rise in positive (as distinguished from natural) law; and that in no country or age could it be traced back to any other source."9 Lincoln added, "But by express statute, in the land of Washington and Jefferson, we may soon be brought face to face with the discreditable fact of showing to the world by our acts that we prefer slavery to freedom—darkness to light!"10

It is no mere extrapolation of Lincoln's conclusion, to reason that the outcome of the contest between natural law and positive law reveals the moral fabric of our society. The world is watching, and the corrupt judicial decisions fostered by a diabolical governance exhibit an extreme preference for darkness rather than light. Natural law includes an absolute moral element that gives it meaning. On the other hand positive law, "by express statute," decries any moral concern. This is why positive law is the legal scheme of tyrants and tyranny, while natural law (higher law) is the law of liberty and social stability. In any social consideration transcendent natural law must be at the apex.


July 4, 1776 was a great occasion in our history and in the history of mankind, because it was the beginning of 15 years of startling developments. In that very brief period . . . a handful of men in our small country, with a population of only a few million people at that time wrote the Declaration of Independence, the Constitution, and the Bill of Rights, and literally shook the world with a new idea in government. . . .

From this last quote, the paraphrase, "the Declaration of Independence was the promise; the Constitution was the fulfillment," was derived. It is accepted by the Federal Government as a true relational description.12 The Declaration of Independence is a Natural Law document. Therefore, it is the height of Supreme Court judicial schizophrenia to embrace the description while at the same time creating laws that violate the Constitutions stated purpose. This contradiction by the Court is the main reason for the social madness we are experiencing today.

Lincoln's concern for America's move from natural law to positive law on social issues should be a wake-up call for the entire nation. This shift in legal philosophy and practice carries with it severe consequences. Lincoln articulated this in his Proclamation Appointing a National Fast-Day during the Civil War:


And whereas, it is the duty of nations as well as of men to own their dependence upon the overruling power of God; to confess their sins and transgressions in humble sorrow, yet with assured hope that genuine repentance will lead to mercy and pardon; and to recognize the sublime truth, announced in the Holy Scriptures and proven by all history, that those nations only are blessed whose God is the Lord:

And insomuch as we know that by His divine law nations, like individuals, are subjected to punishments and chastisements in this world, may we not justly fear that the awful calamity of civil war which now desolates the land may be but a punishment inflicted upon us for our presumptuous sins, to the needful end of our national reformation as a whole people? We have been the recipients of the choicest bounties of Heaven. We have been preserved, these many years, in peace and prosperity. We have grown in numbers, wealth, and power as no other nation has ever grown; but we have forgotten God.13
It is not difficult to see that our leaders today are a far cry from the character displayed by one of the greatest Americans who ever lived. With all of the tragedy occurring in America, who among them has exclaimed, "we have forgotten God?" The choices before us for electing the next President are indeed wanting. This does not alter the fact that a choice must be made. The 7th declaration in Lincoln's Party Platform in 1860 states:

Reading the 2016 Party Platforms you will discover that only one supports Lincoln's concerns—Republican. You will also find in this Platform support for our "Christian heritage" so that "justice and mercy and all the humane and Christian virtues might not be extinguished from the land." The following excerpt from this Platform sets the stage for Americas future success:


We are the party of the Declaration of Independence and the Constitution. The Declaration sets forth the fundamental precepts of American government: That God bestows certain inalienable rights on every individual, thus producing human equality; that government exists first and foremost to protect those inalienable rights; that man-made law must be consistent with God-given, natural rights; and that if God-given, natural, inalienable rights come in conflict with government, court, or human-granted rights, God-given, natural, inalienable rights always prevail; that there is a moral law recognized as "the Laws of Nature and of Natures God;" and that American government is to operate with the consent of the governed. We are also the party of the Constitution, the greatest political document ever written. It is the solemn compact built upon principles of the Declaration that enshrines our God-given individual rights and ensures that all Americans stand equal before the law, defines the purposes and limits of government, and is the blueprint for ordered liberty that makes the United States the worlds freest and most prosperous nation.15

You obviously cannot vote for Abraham Lincoln, but you can vote for the candidate whose Party Platform supports what Lincoln would consider the most important issue in this decisive hour. "Take no thought for the political fate of any man [or woman] whomsoever—but come back to the truths that are in the Declaration of Independence." America's future hangs in the balance!

For those who agree with Abraham Lincoln, "that those nations only are blessed whose God is the Lord," please consider referring this article to friends and family. There is a seriously troubling malaise in this political cycle that must be overcome. It will take millions of informed voters to turn the tide. Our time before the election is short, but the consequences could last for generations!