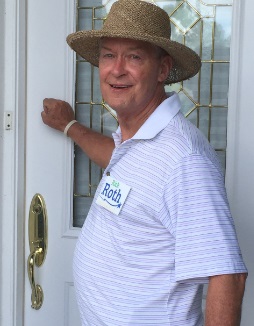 DUCTION:
Yesterday a strange man knocked on my front door. Actually, he wasn't all that strange. I just didn't know him. But I invited him in, and my wife, daughter and I got to know him. It turned out that he was an unusual politician. He was here to personally meet the people he was asking to vote for him (instead of using mailers, ads, and the dreaded "robo-callers"). He gave us truthful answers to our questions about his positions, instead of trying to figure out what we wanted to hear. And we found that he wasn't actually a politician - yet. He's a businessman concerned about the direction of our country, and running for office the first time. Best of all, he is a Conservative Christian. I'm going to vote for this guy!

His article is a well-written primer on how you can effectively participate in the election process, vote intelligently, and have an impact! It is a must-read.

This is a call to action for people who care about the future of our country to participate in the upcoming elections.

Contrary to what some people say, America is not a democracy. It is a Republic. American citizens who have registered to vote elect people to represent them. Their responsibility is to serve the people and manage the affairs of our local, state, and national governments.

As a local businessman and community leader for 30 years, I believe in leading by example. I hope I can encourage you to participate in politics by becoming informed and voting for candidates who think like you.

In early September 2014, a friend invited me to a ‘Give Me Liberty Tour’ rally in south Florida. The speakers talked about the changing moral climate. They were calling people of faith to run for public office.  If good people stand by and do nothing, then we deserve the country we get. It was a powerful message that hit the mark.  I later realized the call was for me to run for an elected office.

The primary reason politicians make promises that they can not or will not keep is very simple.  It helps them get elected. Part of the solution is electing candidates with integrity. But just as important is an informed voting public who will hold them accountable. Let’s talk about what you as a concerned and informed citizen can do to responsibly participate in the election process.

Goal #1 -  Become a registered voter.
1- Register to vote – go online to the Supervisor of Elections in your county.
2- If you are a resident alien, take the necessary steps to become a naturalized citizen.
3- Pick a party based on your values.  Talk to business people and friends whom you respect.
4- In Florida, you have to be a registered Republican or Democrat to vote in the primary. This year it is August 30. You must register 29 days in advance to be able to vote.  August 1 is the deadline for the Primary. Every state is different. The third choice is independent. Not recommended.

Goal #2 – Become an informed voter
1- Use the media to learn about the important issues, then follow up with your own research before you form an opinion.
2- When listening to radio or TV, filter out the comments of the paid commentator. He is a paid employee of the network. His job is to entertain you. You are trying to get information.
3- Take notes on the guest speakers. Dissect their talking points. Then do your own research online. Do not trust anyone. Most times the media presents a slanted view of the truth.

Goal # 3 – Select your sources of information
1- TV – Fox News.  It is good to get information on current issues. I prefer the Kelly File. My second choice is The O’Reilly Factor. By media standards they are moderates, not conservative or liberal.
2- Radio- Christian Radio like Moody Radio is very credible source of news, issues and book reviews.  Moody Radio is a national radio broadcaster owned by Moody Bible Institute in Chicago. According to Moody, their listener audience is not just Protestants and Catholics.
3- Newspaper – Wall Street Journal. In-depth reporting of national and world news. Articles give key details and statistics to help you understand why the issue is important and relevant.
4- Business and trade journals. No matter who you are, your interests are served by a non-profit organization, such as the Chamber of Commerce, Boys and Girls Club, Nation Federation of Independent Business, etc.
5- Business friends and associates. We live in communities. Over time, we get to know influential business and community leaders. Actively develop a network of friends and business people who are experts in their individual fields. Ask people their opinion on key issues of the day. Leaders love to share their knowledge. Immigration? Ask a farmer, a hotel owner, a building contractor or sub-contractor. They all employ seasonal people. Healthcare? Develop a personal relationship with your doctor. Insurance? Develop a long-term relationship with your independent insurance agent.
6- Join a non-profit organization. Volunteer in activities and help others. You will make friends with great people who are willing to share their experiences and knowledge with you. They are volunteers.
7- Donate to good causes. They will send you emails and information on their activities. They will keep you informed on their issues.

Goal # 4 – How to pick a candidate
1- Experience is better than speaking ability. Benjamin Franklin said, “Well done is far superior to well said”. First learn about the candidate before they ran for public office. What is their vocation? What groups do they belong to? Did they donate or participate with volunteer organizations? If they are an incumbent, study their voting record.
2- Read up on their policy positions. Remember, it is easy to change what you say. Your history does not change. Vote for the person most like you. They will be your representative.
3- Pick your candidate like you pick your friends. If they agree with you on the top two issues, and with 70% of all the issues, then you can be friends, and you can support them.
4- There are major issues like JOBS, IMMIGRATION, and TAXES. And there are other issues that are personal preferences like religion and abortion. Focus more on the major issues.
5- Please do not be a single issue voter. People are complicated. People who expect candidates to be with them on all issues are a big problem. Candidates who parrot what people ask them to support are pandering to people at best, and lying to them at the worst.

Goal #5 – Get to know your elected Representative
1- Representatives count noses. The best way to influence your representative on an issue is to belong to an organization that has a lobbyist in Tallahassee and Washington DC to work on those issues.
2- Participate by going to meetings. Meet your representative at a town hall meeting, in their local office (by appointment), or in their office in Tallahassee or Washington DC.
3- Contribute to their political campaign. Contributing regularly is more important than the amount.  If you meet with your representative and donate regularly, you will move to the top of their list.
4- Know what to expect. Your congressman represents 700,000 voters. Representatives vote on specific bills. Speak specifically to your issue, and ask them to vote for or against a certain bill related to your issue.  Remember the larger the group that holds your position, the better your chances.
5- When you give them money, you are buying access, not a guarantee that they will vote with you on an issue.  By law, you can not discuss money with the candidate when you visit their office. Talk policy only.
6- Your goal is long term. You want your representative to see you as a valuable source of information concerning your industry and your issues.