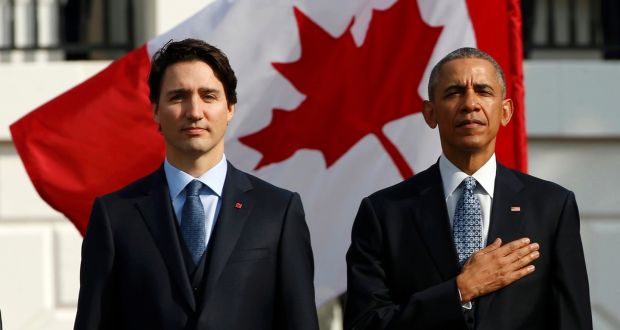 After following in the footsteps of its big brother and neighbor, Canada now has a child firmly ensconced at the top of its government. The Misadventures of Barack and Justin would be the basis of a comedy television series if not for the real life stakes. In fact, both have media covering for them in order to preserve the pop culture-created mystique, with Marvel Comics creating the latest mask by depicting P.M. Trudeau as a superhero consultant. Nice way to detract from the weaknesses of His Wimpiness.

Rather than comedy or comic book hero, our two leaders forge a story that is more Greek tragedy, set in modern times.

Trudeau’s government has a uniquely, shall we say, unheroic, non-robust way of dealing with suspected terrorists. It’s not what Superman would do, for sure. In mid-August, the Public Safety Minister was forced to answer questions after a terrorist was killed by police while on his way to committing a terrorist attack. The Muslim jihadist was on a “peace bond,” which is a Canadian legal promise to be nice. Are you suspected of wanting to kill infidels wherever you find them, of wanting to violently usher in the worldwide caliphate (is there a peaceful way?), of wanting to terrorize the Western world? Here, sign this “peace bond” and promise to behave.

Said the Public Safety Minister:  “We need to understand what positive messages can counteract the insidious poison that draws people in, especially young people.” To what end? Trudeau’s Liberal Party government wants to focus on offering counseling and intervention services to those who would kill us. Seriously. Apparently, it’s all one big Freudian psychological gap that can be bridged through a little time on the couch. Good defeats Evil by way of positive messages, elixirs against poisons, and maybe a little yoga during the first- and second-intermissions of Hockey Night in Canada.

For his part, President Obama fails to understand just about everything relating to America. The alarming aspect is that the average American only understands his own wallet and perhaps that of his neighbor’s. The long-term damage of matters not regularly discussed, such as foreign policy and the economy, escapes him. It’s not a deficiency of intelligence, rather of attention.

Through pure incompetence- and likely utter ignorance, as well- President Obama is setting up the American Dollar for a significant future devaluation. The Dollar depends on its status as the world’s Reserve Currency for its strength. How does a country with a debt the size of its economy continue to lead the world? Our size and political stability are factors, but another major factor is that the Dollar is the world’s currency. When France buys Japanese products, they do so in Dollars. Further, transactions pass through the American banking system.

In his thirst to fundamentally transform America, President Obama simultaneously pursues fundamental transformation of the world. Because of this, the administration has fined foreign nations for breaking American laws. Why? Because they can. They briefly have access to money coursing through the American banking system on its way to other countries. This has caused foreign nations to wise up and devise the technology to go around the United States. If they can do so, not only will money be routed around our banks, but foreign banks will find one less reason to deposit funds in our banking system.

Counter-intuitively, this will mean more Dollars back on our shores. Foreign banks will simultaneously pull their money out of American banks and have less need for the Dollar at home (they can trade with other nations in their own currencies rather than ours). This will cause Dollars to flood to our shores as these nations dump Dollars. More money in our country means too many dollars chasing the same amount or fewer goods:  the clinical definition of inflation.

The Dollar thus devalued, other foreign countries will then have reason to dump the Dollar and trade in their currencies, which was once weaker than the Dollar. Unfortunately, a larger dump of the Dollar will lead to hyper-inflation, as foreign countries seek to rid themselves of the quickly fading American currency. Way too many dollars chasing too few goods. No country will need the Dollar, thus the world’s trade will be conducted with some other money- perhaps a new global currency.

The above will mean higher interest rates, which means that it will be more expensive to finance our debt. Higher interest rates mean the cost of money goes up and buying our debt will be less attractive. At some point, that $20 trillion debt becomes a big deal and our economy screeches to a stop.

Don’t feel bad if you cannot explain this; President Obama probably cannot, either. Do not count on this issue becoming a major campaign issue. Major media fail to understand the issues, and Joe Sixpack would flip back over to reruns of The Simpsons if the issue were raised at all.

This is what happens when countries elect drama teachers and community organizers to “lead” their respective nations; however, the problem is deeper than that. America’s status is not the result of President Obama; President Obama is the result of America. The same can be said for Canada and their silly little boy leader. They are products of who their nations are, in an aggregate sense.

Canada can survive their moment of Government by Juvenile, with a P.M. known more for snowboarding than serious thought. Leaders in Beijing don’t sit and rub their hands together with glee at the thought of a Canadian pretending to be a leader. On the other hand, they do send ships into American territorial waters to test American resolve when the US has someone pretending to be a leader.

North Korea, Russia, Iran, and Communist China are all advancing. Bullies and thugs recognize weakness when they see it.

Enjoy it while you can, our brothers to the north. You can fix this in a couple of years, but whatever you do, don’t laugh:  The Misadventures of Barack and Justin aren’t funny, unless you speak Chinese or Russian, or you have a thing for a worldwide caliphate.