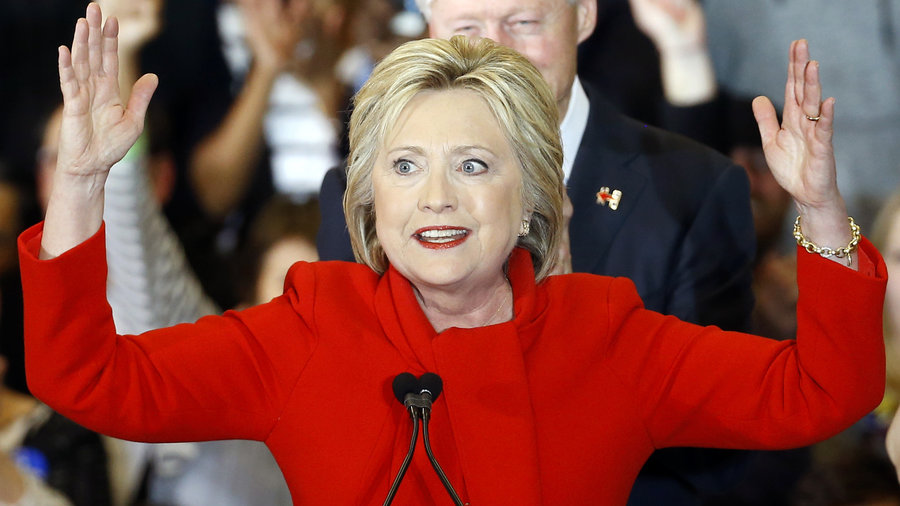 National Review writer Jonah Goldberg asked the question in a piece written in February 2015 of what Hillary’s brand is. It has morphed so often that like the woman, cannot be amply traced without an expert in high speed atomic particle acceleration to interpret the results.

Goldberg has to concede – “No doubt many voters – and pundits – will happily buy whatever they come up with for Clinton. But others will focus not on what’s new in Hillary 5.0, but what is constant in all versions so far: a purpose defined by the pursuit of power.”

The question has now been expanded to – what will voters happily buy from the queen of pantsuits and prevarications.

Starting with Hillary’s book – “It takes a Village to Raise a Child...” we have begun to see that while looking for a brand, the truth has been used sparingly.

Clinton paid journalism professor Barbara Feinman of Georgetown University $120,000 to ghostwrite her book; no attribution was given to Ms. Feinman. Hillary claims she wrote every word herself. Perhaps she paid Feinman $120K to have tea with her and discuss the merits.

It remains unknown to most people, but even in its sixteenth anniversary the book is still only mind candy for liberals and progressives who think like Hillary. The rest of us are still certain that it takes only two loving parents to raise a child, not an entire village.

It is much like the list of “112 reasons (and counting) Hillary Clinton should be our next president.” found on Hillary’s own website. It is a list that was obviously ghost written (in Hillary’s mind) by one - Barack Obama – but he will get no attribution either.

So, how much will lackadaisical liberal loonies pay to put their liar in the White House?

According to Politico in May of 2015, Hillary would need to pull a clean $2 Billion from the upper-class and affluent liberal voters to get elected. But AP.org reported in August 2016 that Hillary was only a half billion dollars underway.

Hillary said in her book, It Takes a Village – “We are living in an interdependent world where what our children hear, see, feel, and learn will affect how they grow up and who they turn out to be.” She also supports all of the gay and transgender policies including the indoctrination and exposure of underage children to the homosexual and trans lifestyle.

So teaching kindergarteners about tranny choice in California schools and using rainbow unicorns to acquaint them with homosexual alternatives in other schools is her idea of something good! This is Hillary’s view of their future?
This is a worldview that only a few years ago would have put Ms. Clinton on the fast track to the jailhouse – not the White House.

There are still millions of Americans that believe that she should be jailed for her lying, corruption and her dangerous views regarding the children of this nation

There are still millions of Americans that believe that she should be jailed for her lying, corruption and her dangerous views regarding the children of this nation.

Also from It Takes a village she states, “…standards are for: They establish what children should know, not how they are taught or measured.”

Nudging and coddling youngsters to consider sexual preferences that push them to the edge of sexual freakishness, before they ever have their first sexual impulses, is what she represents to America as - what children should know?

Hillary’s advice about children can be used to raise yet one more important question about how full grown adults should approach this candidate for president.

Hillary says, “Knowing what to expect next gives children a sense of security.”

It is this quote that fosters chills up and down the spine. It is ‘knowing’ what she will produce next, that should send any serious voter, who still loves this nation, as far away from Ms. Clinton as they can get, not bouncing down to the ballot box with her name in mind.

There is no security to be found in Hillary’s brand of liberalism, especially for the innocent.

After reviewing Christ’s strong warning about mis-leading or harming children I would not send a mite or a penny to anything with Hillary’s name on it.

“But whoso shall offend one of these little ones which believe in me, it were better for him that a millstone were hanged about his neck, and that he were drowned in the depth of the sea.”(Mt 18: 6)

Pro-choice liberals stand behind Planned Parenthood even though the only plans they have ever disclosed, is to destroy both families and unborn infants.

Hillary’s policy on children is tantamount to pre-planned child abuse. What organization or agency might she create if elected to office? Does America need an office of planned child molestation and abuse?

Finally – let’s stop repeating the ridiculous phrase created by liberals and the indifferent in this election cycle. The idea that both candidates are a lousy choice is pure absurdity.

Saying that Hillary and Donald Trump are somehow equally abhorrent - is itself - abhorrent.

He may be more like the Big Bopper than Ronald Reagan, but look again and you will see he is in no way comparable to Hillary Clinton.

He grew up in America as an American not in liberal la-la land and his aim is to restore this country, not destroy it.