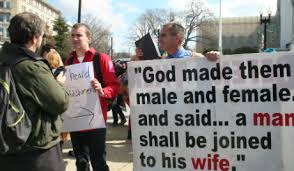 There is no doubt in my mind that the leftward lurch of this country over the last 40-50 years has been staggering, and that the Left has firmly imbedded itself into virtually every corner of our society – entertainment, media, education, and now – more than ever- the church.  Until recently, I thought that there was no way a committed political liberal (i.e., socialist in today’s terms) could possibly square the circle and claim with a straight face that he/she is also a committed Christian.  The breathtaking hypocrisy and cognitive dissonance would simply be too great for all but the most brazen, and didn’t Jesus teach us to be humble?  A liberal believing Christian would make about as much sense as a brazenly shameless one.  And yet…here we are, in 2016, and left-leaning Christians are everywhere.  Somewhere, left-leaning Pastor Jim Wallis is smiling, or maybe smirking is the better term.

The Left has taught its minions well- that no matter how bad their candidate may seem, the other side’s is far, far worse.  Thus we have Saint Hillary vs. Dr. Evil, aka Donald Trump.  However, what’s bothersome to me is not simply that absurd comparison in itself, but the underlying arrogance and condescension that lurks beneath this and every false narrative and premise of the Left.  Most people simply can’t or won’t come to grips with two critical aspects of the times we live in: (1) we are indeed in the “end times,” whether that means seven years or a hundred; and (2) the radical left (which Hillary Clinton is aligned with ultimately, don’t kid yourself) bases its ideology and strategy on Saul Alinsky’s Rules for Radicals, which a young Hillary read and has since absorbed, osmosis-like into her way of thinking about politics and political opponents.  Why else, when asked who her biggest enemy was, would she respond with – not ISIS – not Iran – not Russia – but “Republicans.”

So let’s go all the way to a big underlying premise as to why we’re in the crazy and desperate situation we are in today.  Second Thessalonians 2:11, in which the Apostle Paul is addressing the end times, says:  “For this reason God sends them a powerful delusion so that they will believe the lie.”  Now, let’s put that in some context.  In the previous verses, Paul was warning the early believers that the “man of lawlessness” (that is, the antichrist) must come before Jesus comes again.  Jesus himself said, “You know how to interpret the appearance of the sky, but you cannot interpret the signs of the times” (Matt 16:3).  Therefore it’s clear that no matter what warning man may have about the perilousness of the end times, and the appearance of the antichrist representing pure evil, people will still follow the lie.  Alinskyites count on this – it’s not for nothing that the author of Rules for Radicals dedicated his book to the father of lies.  When you look today at the political apathy of the average American, who may be more concerned about fantasy football or Kim Kardashian’s latest exploits, it’s clear that many are simply ignoring the peril until it’s literally in their back yards – by which time it will be too late.  Whether purporting to be Christians or not, they are implicitly buying the lies they are being fed daily.

Now one can believe however one wants to believe regarding the pull of the lie and whether true Bible-believing Christians will fall prey to the main lies of the current generations.  Lies such as the following:

·  Abortion, at least to some normally ill-defined limit, is OK.
·  Illegal drug use, again subject to some ill-defined limits, is OK.
·  It’s OK for so-called transgender people, or those even thinking about it, to use the restroom that fits with the gender they most identify with on any given day.
·  Man’s industrial and living habits can have a measurably adverse impact on the Earth’s climate, implying that man has inordinate power of change over the Earth that God alone created.
·  Gay marriage is OK as is gay couples’ adoption of children.  I’ll admit, my personal views on this have changed somewhat as I have observed and read about committed gay marriages that seem to be working (key word “seem”).  However, the ultimate word is God’s and even if one can rationalize away what the Old Testament says about homosexuality, it’s pretty clear that marriage between a man and woman is His design.  If you want to accuse me of falling prey to the lie in this case by even partially acknowledging its “legitimacy,” so be it – but I’m not now and never will be buying in all the way.  However, my admission here is to illustrate how easy it is to acquiesce to the pressure of what we observe, as well as what we are fed, versus the ultimate reality of God’s word.
·  There is something inherently bad (i.e., racist, homophobic, anti-poor, backward-thinking) about “evangelical” Christianity. In fact, after belonging to several churches that claim to be evangelical but are liberal in outlook, I daresay that the very definition of what it means to be an evangelical Christian is changing, since the traditional one has been under such continuous assault.

If we’re looking at things through an objective, unfiltered lens, there’s no doubt that today’s church – including many of those calling themselves “evangelical” – buy into some or all of the above to some degree.  Otherwise, a politically liberal Christian would be about as common as a three-dollar bill.

All this to say that the revelations about what Mr. Trump said and may or may not have done regarding his attitude and treatment of women come right out of the Alinskyite playbook which says to identify the target and destroy it.  Chances are that none of the accusers of physical abuse are truthful; therefore the Alinskyites are successfully destroying Trump (granted, with a big assist from the candidate himself) with (mostly) lies right before our eyes.  The media, which will have much to answer for eventually, have accomplished their objective of minimizing Hillary Clinton’s scandalous behavior about matters of national security – far more important than Trump’s shoot-from-the-hip remarks about women and other things that have been blown way out of proportion.  Yet liberal Christians – who support candidates that strongly believe in most or all of the bulleted lies above- express outrage not at Hillary Clinton for supporting such things, but at Trump for the things he says and has allegedly done.  Double standard, anyone?

You might well ask, why do I belong to a liberal-leaning church when I believe this way?  It’s a fair question.  Like many others on the journey, I’m still sorting a lot of things out and may end up somewhere else where the leadership’s beliefs are more in line with mine.  In the meantime, as Christians we all must keep our eyes on the Truth, which can be very difficult to discern in our discordant culture.  The Left wants us to throw in the towel, to become so jaded and cynical that we simply roll over and let them win.  Regardless of who wins this election, we simply cannot allow that to happen.