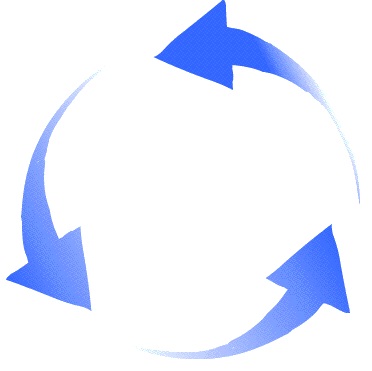 You were born; you were weak and needy as you grew; you matured, full of energy and strength; you slowed down as stamina decreased; you break down; you die. That cold, over-simplified explanation of Life is a series of snapshots of the Cycle of Life. Out of kindness, I changed tense to avoid counting you among the dead already. But it will happen.

This cycle applies to not just living creatures, but to organizations, as well. Businesses come and go; departments within businesses rise up and fall. Organizations that cannot reinvent themselves or adapt quickly enough go the way of the proverbial dinosaur. We all have seen departments within companies and even entire companies - young and vibrant, creative and innovative - grow mature and begin to break down.

The same innovators who made the organization great rose up, but then they failed to trust those who came up through the ranks under them. Leaders who did not want others to have the same freedom they once enjoyed proceed to slow the organization with rules and regulations. Oversight becomes more important than free enterprise or innovation. Top-heavy, fat, and nearly immobile, the organization dies.

Entire businesses fail to adapt. After surpassing 70 years of age, IBM - old, slow, tired - could not keep up when young Apples and Microsofts came along, spirited and full of vigor. They adapted enough to stay in business, but not enough to remain relevant for many years. Kodak performed well as film technology developed slowly over the decades, but once the digital world arrived and flew by, Kodak was left behind, waiting its turn in line at bankruptcy court.

The business world is littered with such relics, unable to escape the cycle that results in death. Only organizations which can adapt, and adapt quickly, survive.

Once upon a time, Atari was “it” for young people who played video games - games that are crude in technology by today’s standards. Of course, once upon a time most of us were young, strong, and vibrant ourselves.

When the Whigs could not adapt to the changing landscape as it related to American expansionism and slavery, the party broke down and quickly died, leaving a void that was filled by the newly formed Republican Party. This was at a time when there were strong pro- and anti-slavery political forces. The Whigs were the political version of Kodak of their day. It wasn’t that they chose the wrong side; rather, the Whigs as a party simply couldn’t choose a side either way, became irrelevant, and then they disappeared.

On the opposite side of the coin of adapting, the March of Dimes survives to this day because they outlived polio. Whether you take the cynical view that a charity cannot bear to voluntarily fade away, with mission accomplished, the fact remains that they did the only thing that an organization can do to resist Father Time:  they changed course. Now they raise money and support research for babies and pregnant women.

Today, there are already bright minds in the Republican Party preparing to tackle political issues and, perhaps unwittingly, the cycle of life. The bright minds think of the Whigs more than Atari or IBM as they ponder the after-effects of the election cycle that is winding down. No matter whether Hurricane Trump roars into the White House or back to New York, the Republican Party has shattered into pieces. The party is not currently on life support, but its status will be determined by the post-election events that unfold over the coming months.

Will the Republican Party stick with a Speaker of the House who is quick to succumb to defeat, then call it a victory, and who is not afraid to use the rhetoric of the left-wing president when coming down against American sovereignty?

Will the GOP Establishment feel emboldened if Hurricane Trump sweeps the incredibly corrupt Clinton family back into the White House, eager to resume their base of power? A return to Self and Party over Country?

Will the Trumpeters display the willingness to be builders rather than just snipers and bomb throwers?

If Hurricane Trump is successful, will he pivot away from his destructive nature and help the party regroup, or will he become the second coming of President John Tyler, a man without a party, politically alone, deserted by everyone he needed? By the way, President Tyler played a significant role in history, one which President James Polk later completed. For a hint of what Tyler worked for, look closely at a map of Texas.

The certainty of death grabbed hold of me while I was still young and vibrant, reading excerpts of correspondence between two aging greats of our country:  John Adams and Thomas Jefferson. Their wisdom, their insight, their subtle, dignified dread left a mark on my soul. The inevitability of Death may not seem fair, but it is consistent. No mere mortal avoids its visit.

Organizations, on the other hand, can survive.

Will the Republican Party adapt? Unfortunately, many in the GOP Establishment take the concept of adapting to mean that the party must become more like the Democrats. In reality, there is a gaping hole in American politics, with an entire American entity lacking representation. That entity is Liberty. The Constitution has been all but forgotten. The Constitution’s Framers are mocked more than honored.

Win or lose on November 8th, the Republican Party now has before it an opportunity to reject the wounded and battered Establishment, to harness the energy of the Trumpeters, and to launch a series of programs (not government programs, but party programs) to educate the public. Do you want to see a “big tent?” Invite others to enter into your tent; give them reasons to come in. Expanding the tent by repeatedly moving the pillars of the party will only lead to instability and collapse. If there were a Whig or two still around, they could explain it to you.

While we all go through the same cycle, that doesn’t make us all equally intelligent or reasonable, and it doesn’t make all organizations equally effective. The last great accomplishment of the Republican Party was the balancing of the federal budget in the 1990s, which President Bill Clinton at first fought. It’s difficult to have confidence in a party that has leadership more concerned about maintaining its own power and which has done nothing to stop a runaway, lawless president.

Will the Republican Party become a version of IBM or will it follow the lead of the March of Dimes? There’s a toy that suffered through the cycle of life, though it still exists, barely, which you know as the Magic Eight Ball.  It would respond to the question of whether the GOP will properly adapt with the answer, “Don’t count on it.”