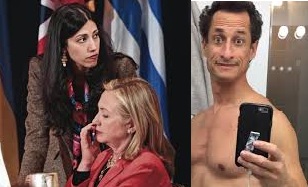 Shock waves went through the political world eleven days before the 2016 Presidential election as FBI director James Comey sent a letter to Congressional leadership stating he was re-opening  the criminal investigation into Hillary Clinton and her email issue.

In researching another matter this weekend I came across multiple emails to and from Huma Abedin at Huma@Clintonemail.com.

Huma Abedin had her own address at the “Clintonemail.com” private server house. And herein lies the reopening of the FBI Investigation on Hillary Clinton.

Huma Abedin was Secretary of State Clinton’s Deputy Chief of Staff from 2009 to 2013 and closest advisor. She is now the Vice Chairwoman of Clinton’s Presidential campaign. Huma’s husband, former Congressman Anthony Weiner, is under FBI investigation for his addiction of “sexting;” taking pictures of private body parts and texting them to women. His obsession expanded to sexual texts to a 15 year old girl which is why the FBI got involved.

Fox News reported Sunday afternoon October 30th 2016 that Mr. Weiner was cooperating and voluntarily gave his laptop to the FBI. They did not need a search warrant or court order to see the emails on Weiner’s laptop. CBS News reported that the laptop was obtained via a search warrant via the FBI case against Weiner.

The FBI has expanded its “Emailgate probe” to include whether the overlapping of Clinton Foundation work and the State Department violated public corruption laws.

In a batch of Huma’s emails unclassified and released (page 4 of 130), Huma, as the Secretary of State’s Deputy Chief of staff, was also coordinating email communication regarding the Clinton Foundation activities and fundraising. An email from Dennis Chang on June 11, 2012 read “Attached is the list of attendees for tomorrow night’s Clinton Foundation dinner. Let me know if you need anything else for HRC’s briefing.” A few minutes later she forwarded it to herself at an undisclosed email address.

This was one of several emails to the Huma@Clintonemail.com address. Huma forwarded the email to herself, at a hidden address, apparently in order to “print” off the list of donors attending the fundraising dinner for the foundation.

If Huma forwarded herself official emails off of the Clinton email server to a Yahoo or similar address she owned, the email would likely still be on the Yahoo email drive and possibly in the “downloads” folder on the family laptop or family server. This is likely, now that the FBI has the family laptop via Mr. Weiner, how a ‘large quantity’ of emails pertaining to the Clinton Investigation has been discovered nine days before the election.

How ironic is it, after Hillary has defended her husband many years over despicable acts with other women, Hillary now faces consequences as a result of the acts of an unrelated man with a sexual obsession?


And then there is Bill -

In the unclassified Department of State emails  (page 13 of 130) an email is categorized as “Time Sensitive” and “Red Category.” It was sent in May 2012 by an unidentifiable person to Cheryl Mills, Jake Sullivan and other Hillary staffers. It read;

“As you may know, WJC (William Jefferson Clinton) is attending an event in Monaco early this week with the Monaco Prince and some of the proceeds are going to the Clinton Foundation. Gulnara Karimova, daughter of the President of Uzbekistan is a sponsor of the event (apparently approved by the host without our approval). She will be listed in the program and will see WJC. Would USG (US Government) have concerns? If so, we can go back to the organizers and ask them to return her sponsorship and disinvite her, however I imagine that will ruffle some feathers…if her involvement is a concern we will be happy to handle appropriately.”

The daughter of the Uzbekistan dictator was a literal “rock star” in her country. A fashion diva, singer, music video star and Harvard Graduate, she also served as the adviser to the Minister of Foreign Affairs and on the mission to the United Nations. She had apparently come under scrutiny for something she had done, the email referenced articles that are no longer available online.

The Clinton State Department staff apparently wanted to ensure Bill wouldn’t be seen with anyone they would later be embarrassed by.

But they couldn’t stop what Bill would do at the party on his own. 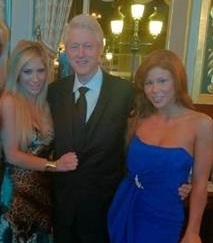 The United States does not deserve to suffer through four years of everlasting scandals, corruption and criminal investigations that a Clinton administration is sure to bring.

Buying from Amazon via these links helps support this work.