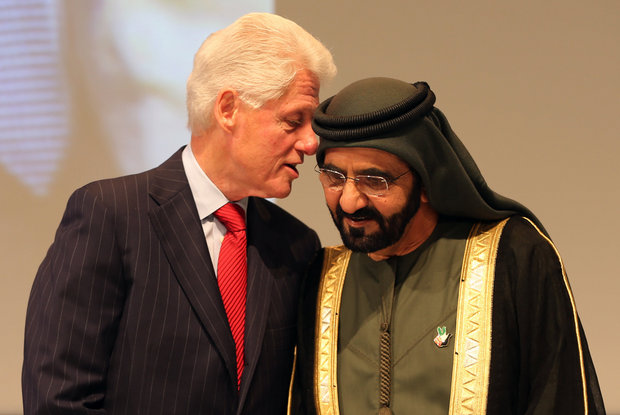 The Clintons’ relationships and income from pro-Palestinian friends desiring a defenseless Israel with 1967 borders must not be overlooked. There is a history of interfering with Israel elections, major personal paydays from anti-Israel Arabs, and billions in U.S. Government contracts going to anti-Israel Palestinians and Arab friends.

Part 1 of this article will address election interference and big personal paydays.

Part 2 will address the Palestinian and Saudi partnerships that received billions in U.S. government contracts while funding the Clinton machine.

Fighting Netanyahu on the Ground and Rigging Elections –

The Clinton’s and their political operatives have a long history in trying to influence elections in Israel and working with pro-Palestinian factions that desire a two state solution with pre-1967 borders for Israel.
OneVoice, a pro-Palestine grass roots group with a mission of a two state solution returning Israel to the 1967 borders, was awarded up to $465,000 in U.S. State Department grants in 2013 and 2014. They used the fundsto build a voter database, train activists, and hire the Obama and Clinton top political operatives to stage an anti-Netanyahu political campaign in the 2015 Israel parliamentary election.

A Senate investigationinto the grants also found that mails regarding the effort against Netanyahu were deletedby State Department officials. Does that sound familiar?

Marc Ginsberg, who advised President Carter on Middle East Policy and was appointed as an Ambassador by President Bill Clinton, was the OneVoice CEO in 2013 and 2014 when many of the grants were being given.
Sen. Rob Portman, chairman of the Senate Permanent Subcommittee on Investigations stated; “It is completely unacceptable that U.S. taxpayer dollars were used to build a political campaign infrastructure that was deployed — immediately after the grant ended — against the leader of our closest ally in the Middle East. American resources should be used to help our allies in the region, not undermine them.”

Jeremy Bird, the hero of the 2008 and 2012 Obama election, then head of the “Ready for Hillary” organization preparing for Hillary’s Presidential run, was sent in early 2015 into Israel to head up the OneVoice campaign against Netanyahu. Bird is currently a Senior Adviser to Hillary Clinton’s Presidential campaign and brags of his efforts to reach out to an estimated 750,000 voters in Israel to influence the elections. Fortunately, he failed.

According to their website, the mission of OneVoice is clear;

“The 1967 borders form the basis for the establishment of an independent, viable Palestinian state, with permanent borders and any modifications to be agreed upon by both parties.”

During Bill Clinton’s Presidency in 1999 a team of Clinton’s former campaign strategists, including his pollster Stanley Greenberg and strategist James Carville, went to Israel to help Ehud Barak defeat Mr. Netanyahu.
That time it worked.

“Previously, then-President Bill Clinton was reportedly active in creating rifts within Netanyahu's coalition, hastening its downfall. The pattern of action may be repeating itself, as Greenberg appears to have played a key role in destabilizing Netanyahu's present (2012) government as well.”

The Parliamentary elections aren’t the only ones Hillary would have liked to have influenced.
In a 2006 interview  with the Jewish Press, then Senator Hillary Clinton said it was a mistake to not influencing the Palestinian election in which Hamas became victorious.
She stated;

As for Clinton’s tenure as U.S. Secretary of State, even the left leaning Haaretz stated“When she left (as Secretary of State) in 2013, Israel and Palestine were worse off, more deeply entrenched and no closer to fruitful negotiations than they were when she entered office.”

In 2002 upon leaving office the Clinton’s needed to make a large amount of money to pay the heavy legal bills that had accumulated during the Presidency due to the many investigations he had faced.
An old friend, campaign contributor and major fundraiser for the Democrat party, Ron Burkle, signed Bill Clinton on as an advisor to his company, Yucaipa, for a five year deal that would yield a multimillion dollar payout if profits were reached.

The Wall Street Journal reported; “Over the years, Mr. Burkle has said publicly that Mr. Clinton's prestige and connections have helped Yucaipa get its business proposals in front of top corporate decision makers.” From 2003 to 2008 Mr. Clinton received $15 million in payments from the organization according to his tax returns, as reported in The Daily Caller.

Clinton then helped start the Yucaipa Global Fund by turning to his friends. Sheikh Mohammed bin Rashid al-Maktoum, then prince of Dubia, is now the Emir of Dubai and Prime Minister of the United Arab Emrites (UAE). He joined with Mr. Clinton and his friend Ron Burkle to form the Global Fund, according to the Wall Street Journal.

Clinton’s partner, Sheikh Mohammed frequently “alluded to the need to pursue a two state solution and negotiate a settlement to the Palestinian issue before any normalization of relations with Israel.”

That is a dangerous statement to come from a friend of a former US President and Secretary of State.
In the height of the 2000-2005 Intifada, a Palestinian uprising against Israel that left over 1000 Israelis dead, then crown prince and UAE Defense Minister Sheikh Mohammed donated Dh20 million to aid the Palestinians in 2002;

"This is not a first for Sheikh Mohammed. He has not only supported us in our struggle, but he is a partner in our struggle. He is one of us;” stated the Palestinian Consulate in Dubai.

GEMS Education paid Bill Clinton $5.6 million in fees after it partnered with the Clinton Global Initiative. He was personally paid over $2 million in 2014 alone, according to the Clinton’s tax return. Bill was named honorary chairman from 2011 to 2014, while Hillary was Secretary of State. GEMS also contributed millions to the Clinton Foundation. Bill stepped down in 2014 to protect his wife’s upcoming Presidential campaign but the Foundation was successful thanks to Bill, and helped the Palestinian cause.

In 2016 the Varkey GEMS Foundation, that Bill Clinton founded, awarded a $1 million global “Teacher of the Year” award to a Palestinian teacher, Hana Al Hroub, who grew up in Bethlehem, which the Varkey Foundation websitecalls a “Palestinian refugee camp.” Hana’s husband serves 10 years in prison in Israel as a terrorist for his part in a 1980 bomb attack in Hebron, that killed six innocent Israeli’s walking home from Friday night prayers. 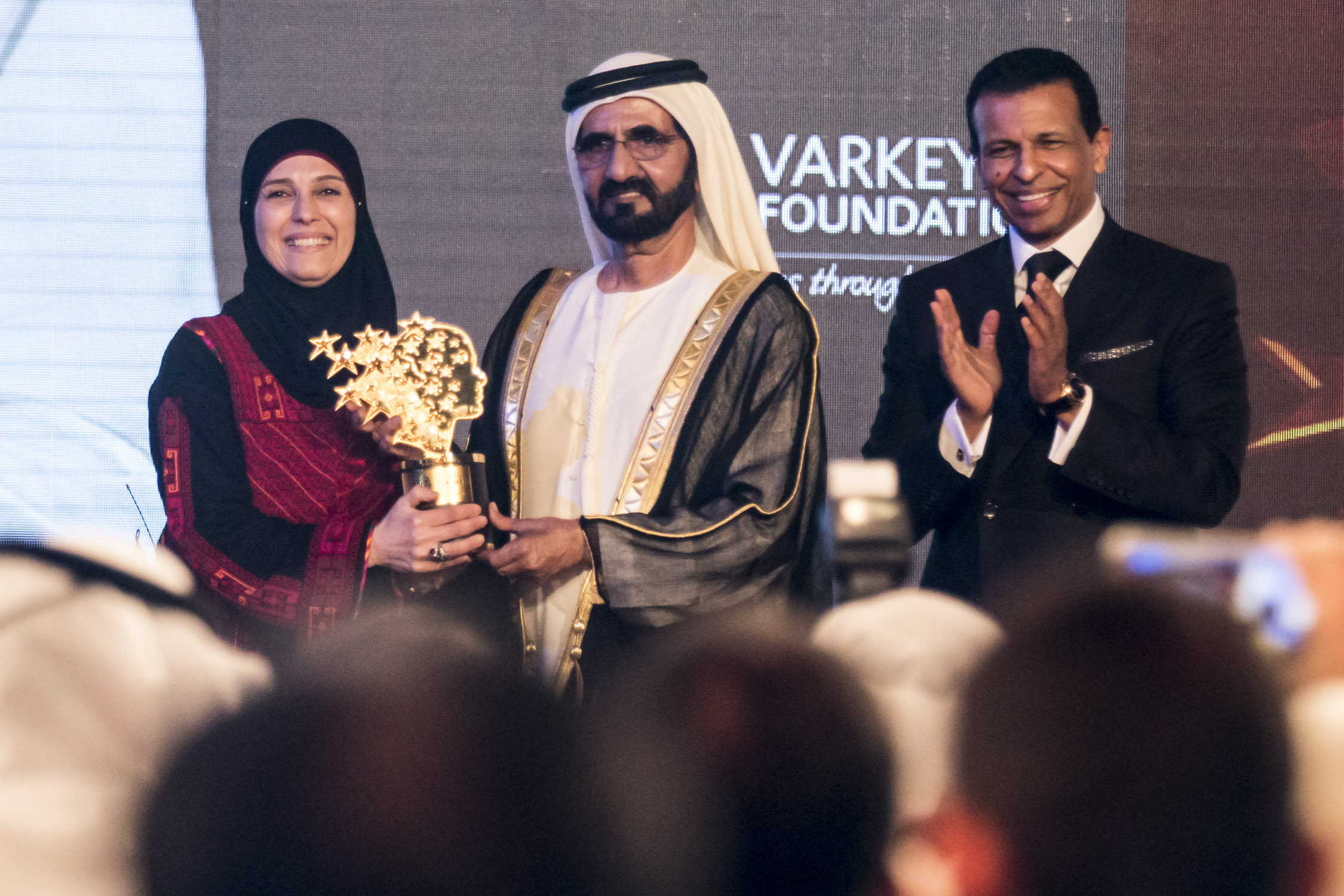 
As Secretary of State, Hillary Clinton strengthened a relationship with the United Arab Emirates, approving husband Bill to receive $1.1 million in speaking fees from the UAE.

While there is nothing wrong with using experience as President to build business for friends, and get paid for it; the company that the Clinton’s kept and the extremely high level of money involved in this influence when Mrs. Clinton was a Senator and Secretary of State brings arouses a scent of corruption.

With the possibility of Mrs. Clinton becoming President, why are her and her husband, the former President, so closely aligned with pro-Palestinian, anti-Israel factions?

These relationships cannot be ignored.

You can read PART 2 of this investigative article on “Church4Israel” here.