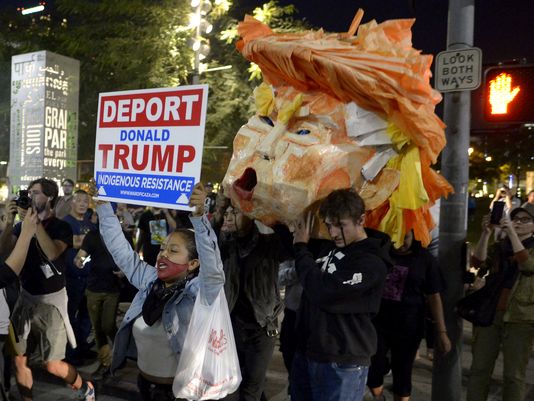 Donald Trump is our next president and the day after the election, several cities had protests that held up traffic and caused disruption of some services. Many of the participants in the protests were disappointed first-time voters who chose Hillary Clinton as their champion. Of these first time voters, the majority were likely in the millennial/college student demographic.

The protests consisted of a lot of chants where hundreds voiced their grievance at coarse utterances by the President-Elect by screaming coarse utterances. American flags were burned, even at American University, as well as effigies of Donald Trump. A good time was had by all (if you weren’t wearing a blue uniform).

From the network coverage, it seemed like it was a good place to take a date (This really happens; I, myself, took a date to a protest at the University of Florida many years ago; hint: stay upwind of pepper gas).

The apparent igniter for the protests was the razor-thin popular vote victory for Hillary Clinton (about 200 thousand votes out of 125 million). That, of course, and grief at the imminent emigration of many popular celebrities from the United States. Amy Schumer is moving to Spain, and Samuel L. Jackson is moving his (paraphrasing here) posterior of color to South Africa. Cher has promised that she will move to Jupiter; I assume she talking about the lovely town on the east coast of Florida, (the other option seems problematic at present).

In terms of popular vote, the Democrats can probably expect to win that in every election in the future. Huge Democrat majorities in the electorate in states like California, New York, and Illinois pretty much guarantee that. Note to aggrieved popular vote protesters; if you want to change this trend, simply move to a rural homestead in a small red state like Wyoming and live off the land. Otherwise, get used to it as a consequence of living in a populous, cosmopolitan area.

Unless the Republican Party makes inroads among minority voters, the demographic changes in the U.S. mean more Democrats in the future. Given that tribal identity trumps American identity these days, these new Democrats will likely live in the same areas as their “tribe”. That means more of them will live in places like California. In the end, that means a bigger democratic victory in those states, but the same electoral votes tallied. Voting certainly matters but the extra Democratic votes there won’t matter as much from an electoral college standpoint.

So expect protests in major cities like the ones we’re seeing to be part and parcel of any election that elects a Republican president in the future. We can avoid these only by the Republican Party reaching out to more diverse groups of people. It can be done. The Party was able to add working-class white Reagan Democrats this time; it’s got four years to add more Latinos, African-Americans, and Asians to assure its long-term success.