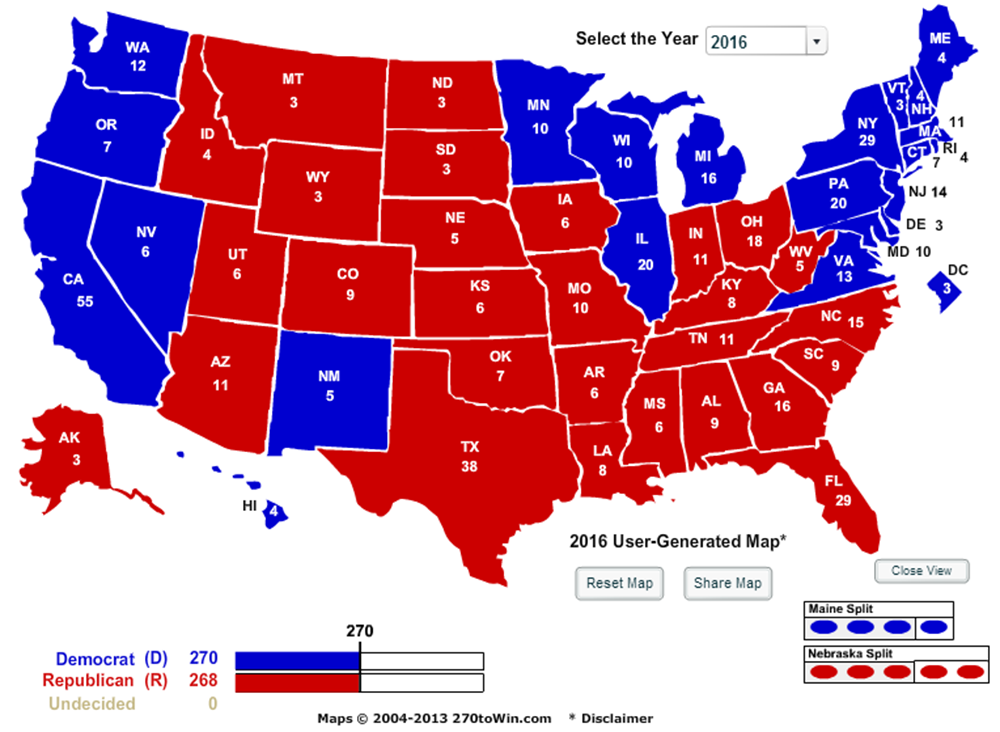 A few reflections on a crazy election cycle, an amusing election night, and a few peeks at the future:

·         It’s over. What felt like the longest election cycle in the history of human life is over. Please, please don’t expose me to another campaign ad for at least... another year when we start all over for the mid-terms.

·         Ed Klein, an investigative reporter known for having impeccable sources, stated that Hillary Clinton cried “inconsolably” and blamed FBI Director James Comey for her defeat. She also blamed President Obama because he failed to stop the FBI. As Klein correctly pointed out, failure or shortcomings are never her fault. Someone else is always to blame. This is what we are missing by not having her in the White House.

·         One interesting facet of election night was the number of pundits who believed their own industry’s polling. They fail to understand how and why polls are weighted toward Democrats (including prior election turnout), which means they didn’t understand why so many Trump voters weren’t considered who either never previously voted, hadn’t voted since Reagan, or hadn’t voted since feeling burned by GHW Bush. Polling is an inexact science which is often accurate- and sometimes monumentally wrong.

·         Harry Reid is about to leave the US Senate, which means he’s about to go down fighting on whatever issue grabs his fancy.

·         We’re about to see the real Donald Trump. He campaigned as a populist, but what will happen when the unstoppable force of DJT meets the immovable object of the D.C. Establishment on a practical, pragmatic political battlefield? What will Trump be like in a year? Two years?

·         The logical choice for Attorney General is Rudy Giuliani. The only way he doesn’t get the position is if he doesn’t want it, opting instead for a special advisor role. Bet on AG.

·         The logical choice for Surgeon General is Dr. Ben Carson, but let’s not forget that Dr. Carson is highly intelligent and is not one dimensional. Something bigger may be in his near future.

·         Can you imagine Ann Coulter as Press Secretary, holding press conferences every day? The events would register in the Nielsen Ratings.

·         There has been some chatter on social media that Paul Ryan will not be the Speaker of the House next year. Don’t bank on it. Trump defeated Establishment candidates in an election, he did not physically drive them out of D.C.

·         Newt Gingrich is bound to play an important role in the Trump Administration. He is a brilliant man with vast knowledge.

·         The American national press (there is nothing “mainstream” about them) is not going to go away, proverbial tails between their legs, whimpering about their loss, defeated. They are going to attack with a vigor that will be veiled by smiles and claims of impartiality. It’s going to be nasty, and that nastiness will gear up this month. Their treatment of him during the campaign will look tame.

·         Don’t you feel sorry for Hillary? She has thus far gotten away with approximately 2,000 felonies, but all for naught. The whole purpose of being exempt from the Rule of Law was not to avoid prison, as many people desire for her, but to clear her path to the White House. All that work to bring AG Loretta Lynch to heel, to get Comey to reinterpret laws, and to destroy evidence and gain immunity for acolytes- all that, only to lose. But, to quote a line I once heard somewhere, what difference, at this point, does it make?

·         We’re going to hear cries that Hillary has suffered enough, that she shouldn’t be prosecuted for her many, many crimes. We’re going to hear that it’s best for the Republic that these matters are not pursued. Don’t fall for the shallow thinking. Her crimes aren’t mere matters of policy, rather they are actual crimes, many of which concern national security. Further, it was the unintended consequence of the decision of the newly elected George Walker Bush, who made the “high road” decision to not pursue further misdeeds of outgoing president Bill Clinton, which emboldened Bill Clinton to commit additional crimes by way of the notorious Clinton Foundation. Had GW Bush not decided that it was “best for the nation” to overlook Clinton’s wrongdoings, it is likely that the Clinton Foundation and their 6% to needy people rate would not exist.

·         President Donald Trump has to work with Congress, so the first, smart move he can make is to make it clear that how he was really views the senator from Texas is that Ted Cruz is “Lion Ted.”

·         Watching Van Jones’ racialist meltdown and Rachel Maddow’s... whatever that little spasm was, was worth staying up until 2:30 a.m., Central Time. Can we do this more often? Some of the minor moments were enjoyable, as well, such as when a CNN demographics analyst came to the realization that Michigan had gone horribly wrong for the Democrats. He struggled to keep his head up as he announced that the state was likely “lost.” It’s the little things in life.

·         Coming to America, the night before Trump’s inauguration:  the biggest pardon in our history.

Back to the present, next up will be the media attacks and the cabinet selections for the President Donald Trump administration. The big question is the most obvious:  How will he govern? If he holds to his word, he has the opportunity to be a successful president. If he does not, there will be millions of Trump supporters who will not forgive him, and he will live the life of President John Tyler:  a man without a party and without a political future, even though a second term was desired by the president.

No matter what happens, the most corrupt person to ever receive a major party’s nomination for president has been defeated and her political career is over. Now on to the investigations to help root out the corruption that pervades the Ruling Class. Pardons be damned.