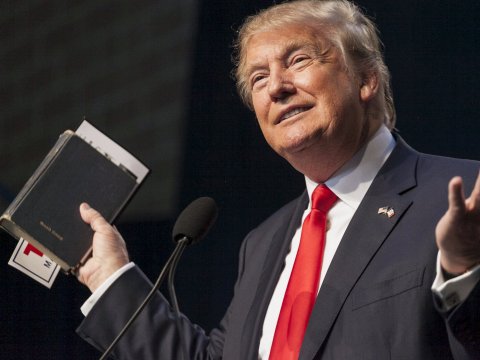 Excitement has been running high and full congratulations are in order for Donald Trump, Mike Pence and the American voters.

The Bible reading Christian knows that politics and religion (faith) may be intertwined, but they are not two of a kind. Mr. Trump will be our President, not our pastor and he cannot give to us, what only can be supplied by the Holy Spirit.

Author of the bestselling “Born Again,” Chuck Colson, said it best. – “The kingdom of God will not arrive on Air Force One…”

What will arrive on Air Force One is a chance to change direction and undo some of the worst legacies and laws to undermine our nation in its entire history.

Many are rejoicing in what looks like a veritable miracle of God in the outcome of this heated election. Others are cautious and are calling it a reprieve or a period of probation for America to pause and deeply consider the generational long slide into deep immorality we have been undergoing. To many, it is the beginning of revival or a renewal.

Anne Graham Lotz, Franklin Graham and a plethora of significant voices are warning that we should pray even more now - than before.

They are right for several reasons.

What that means is that just about half of America’s voters still think that the government should allow and continue to pay for abortions and the God given sanctity of marriage between one man and one woman should not continue in perpetuity.

These two things alone will bring us headlong into conflict with God if they are not stopped. The generation that brought in these cursed practices has run out, time has run out and we can only hope God’s patience has not run out.

It may be time to be conciliatory toward Americans who don’t want and still don’t see Donald Trump as their president – but that won’t be easy.

The anti-Trump demonstrations and near riots taking place in our cities are not a good sign. Breitbart is reporting that a top admissions officer at George Mason University (GMU) is now calling Christians and conservatives – “worthless trash.”

Some are willing to say that the dissenters are demon influenced reprobates who want to keep the country on the fast track to anarchy and pure evil. Others think that in time we can assuage many of the estranged progressives and liberals when they see the nation once again going smoothly into a brighter future.

This complexity will be very hard to navigate considering that Mr. Trump has already moved off center in recent remarks made to CBS News sources.

On the moral front the two great offences that seem to be calling for God’s judgment are same sex marriage and abortion.

ABC has reported that when questioned Mr. Trump said that he is “fine” with same sex marriage and that it is “settled” as the law of the land.

Besides being contrary to the strong held beliefs of his Vice President-elect Mike Pence, reversal of the same sex marriage ruling of Obergefell v. Hodges which legalized such unions is also part of the Republican Party platform.

This is when a mixed blessing takes on the effect of a half curse. According to scriptures both same sex unions and abortion are serious sins – serious enough to bring a nation down.

It is more important now to be supportive of the new team of Trump and Pence, with patience, than it has ever been.

It is also time to take the Apostle Paul’s admonition to pray for our leaders as if our very future depended on it, because as nations go – it does!

“I exhort therefore, that, first of all, supplications, prayers, intercessions, and giving of thanks, be made for all men; For kings, and for all that are in authority; that we may lead a quiet and peaceable life in all godliness and honesty. For this is good and acceptable in the sight of God our Saviour.”(1Tim 2: 1-3)