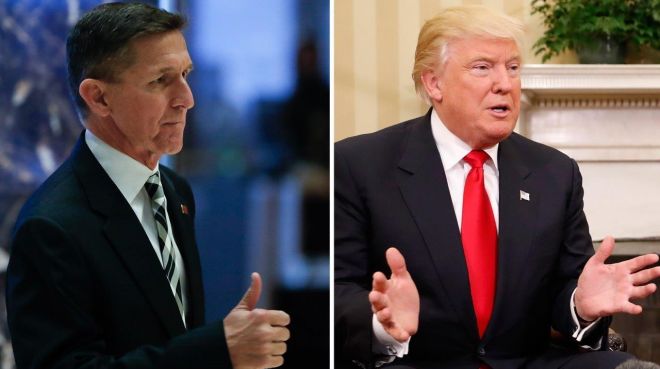 With the selections of General James N. “Mad Dog” Mattis as Secretary of Defense and Lt. General Michael T. Flynn as national security adviser, President-elect Donald J. Trump has indicated that he is prepared to meet foreign threats from Russia, China, and global Islam.

Indeed, Flynn argues in his book, The Field of Fight, that the U.S. is facing a “working coalition” of enemies that includes radical Islamists, Russia, China, North Korea, Iran, Syria, Cuba, Bolivia, Venezuela and Nicaragua.

The subtitle, How We Can Win the Global War Against Radical Islam and Its Allies, suggests that radical Islam is the main enemy. But the content of the book suggests something else—that Russia and China are behind this “enemy alliance” of countries and movements trying to destroy us.

“We face a formidable group of terrorists and hostile countries, and we’ve got to be better prepared to compete or we will need to be ready to destroy them,” says Flynn.

Flynn, the former head of the Defense Intelligence Agency, has been known for his criticism of President Obama for failing to identify radical Islamists as the enemy. But his book expands the list of enemies to Russia, which seems like a strange pick since Flynn had appeared at the Russia Today (RT) propaganda channel’s 10th anniversary celebration in Moscow, sitting next to Russian President Vladimir Putin.

Flynn’s co-author, Michael Ledeen, dismisses concern about Flynn’s attendance at the RT dinner, saying, “He attended a conference in Moscow, and ended up sitting next to the Russian dictator.” That conference was sponsored by a Moscow-funded channel described as KGB-TV by a leading Soviet defector because of its transmission of Russian government propaganda and disinformation.

Ledeen said that Flynn’s critics should read their book to understand his real views on Russia, and that he is not being soft on the Russians.

In an interview, Flynn disclosed that he had previously made another surprising appearance in Russia and “was the first U.S. officer ever allowed inside the headquarters of the GRU [Russian military intelligence].” He explained, “I was able to brief their entire staff. I gave them a leadership OPD. [Professional development class on leadership] and talked a lot about the way the world’s unfolding.”

Whatever he told the GRU and whatever the motivation for accepting a paid trip to Moscow to celebrate RT, Flynn’s book does in fact identify an “enemy alliance” against America, with its “most active and powerful members” being Russia and Iran. He sees “an alliance between Radical Islamists and regimes in Havana, Pyongyang, Moscow, and Beijing.” He calls it “an international alliance of evil countries and movements that is working to destroy us.”

Did he warn Russia against becoming another Evil Empire when he lectured the GRU? If so, they are ignoring Flynn, since the Russian/Iranian/Syrian alliance is consolidating power by moving through Aleppo, and may ultimately threaten Saudi Arabia.

Making America great again may require a military confrontation with Russia and its client states in the region.

Making America great again may also require confronting China, whose communist rulers are so sensitive about their own illegitimate rule that they are objecting to a telephone call between the President-elect and the President of Taiwan (Free China).

One thing not in dispute is that Flynn thinks that the administration he served, headed by Barack Obama, tried to accommodate our enemies, selling out American interests in the process. Consider these quotes from the book:

·         Obama “has shown great sympathy for anti-American ‘revolutionaries,’ and abandoned friendly tyrannies such as Hosni Mubarak’s Egypt and Zine Ben Ali’s Tunisia.”
·         “Obama has done his damndest to forge alliances with Hugo Chavez, before his death, the Castro brothers, and Ali Khamenei, but they and their cronies have all responded by redoubling their efforts to defeat us.”
·         Obama turned his back on the pro-democracy Green Movement in Iran because he was “heavily invested in secret outreach” to the Iranian regime.
·         Obama “has tiptoed around open criticism of Vladimir Putin’s many aggressive actions.”
·         The Obama Administration’s “open hostility to Israel” has been damaging to U.S. national security.

Flynn writes that “I find it simply incredible that an American president should believe a strategic alliance with Iran to be more attractive than our traditional embrace of Israel.”

As an intelligence officer, Flynn must understand this is not just “incredible” and the result of accidental policies, but rather a deliberate effort to undermine the United States and its traditional alliances. Indeed, if Flynn wants to turn things around, he will have to lead a purge of the Clinton and Obama agents in the Pentagon and other agencies who have been deliberately withholding information about the nature of the threats and how our lives are in peril from an “enemy alliance” that Obama has been supporting as President of the United States.

Flynn’s own DIA was previously home to one of Fidel Castro’s top spies, the DIA’s senior Cuban analyst, Ana Belen Montes, who was charged with having served as a Cuban agent from 1985 to 2001.

Flynn ran the Pentagon’s spy agency from July 22, 2012 to August 7, 2014, and he says some material was left out of the book for security reasons. Yet, he drops a blockbuster on page 143, writing about a “Russian connection” to radical Islam.

Here’s what he says: “As is so often the case when looking at the battlefield, I also found a Russia connection. When the Soviet empire fell, there were a lot of unemployed KGB officials scrambling to make a living. They were a perfect fit with the terror networks, had few moral compunctions about cooperating with violent anti-American organizations (they’d been doing it for decades), and over the few years many of the KGB’s safe houses, station headquarters, and secure communications networks were put at the disposal of terror groups.”

For whatever reason, Flynn does not draw a direct line between these KGB officials and the former KGB officer, Vladimir Putin, running Russia. But he notes that “Putin has done a lot for the Khamenei regime” in Iran.

Flynn says we need an ideological offensive against our enemies, of the kind run by the Office of Strategic Services (OSS) and the CIA against communism. The Achilles heel in this analysis is that the OSS and CIA were infiltrated by enemy agents, and the collapse or fall of communism was a strategic deception. To make matters worse, we recently learned that Obama’s CIA director John Brennan had voted for the Communist Party ticket in 1976 and was nevertheless hired by the agency in 1980. It’s clear that standards for hiring intelligence officers have been dramatically lowered.

The DIA spy, Ana Montes, was herself a left-winger and a campus radical before she joined the Pentagon spy agency in 1984. She was a “true believer” in communism, as a book about the case documents. She wrote DIA policy papers playing down the threat posed by Castro’s Cuba.

“Communism lost mass appeal when the Soviet Empire fell,” writes Flynn. But this is not really the case, as we have seen in the sympathetic coverage of Castro after his death. There are still more than 100 communist parties around the world, including a dozen in the United States. China, North Korea and Cuba are still officially communist countries. Venezuela and Nicaragua are run by Marxists.

In facing this “formidable group of terrorists and hostile countries,” Flynn calls for a “better strategy” and “better intelligence,” but admits that in terms of a U.S. response, “We are slow, and we can’t keep secrets very well…”

We could add former CIA and NSA analyst Edward Snowden to the list.

The biggest in the history of the DIA was Montes, who is not mentioned in the Flynn book.
Nevertheless, Flynn’s book is a welcome change from the head-in-the-sand attitude of so many in and out of government who have failed for a variety of reasons to talk about “moles” in our intelligence agencies, and who refuse to acknowledge foreign threats.

Flynn says he was fired in 2014 as director of the DIA for telling a congressional committee “that we were not as safe as we had been a few years back.” General Mattis was relieved of his command by the Obama administration because he was “hawkish on Iran,” The New York Times reports.

The success of the Trump administration in foreign policy will depend on whether General Mattis, Lt. General Flynn, the designated CIA director, Rep. Mike Pompeo (R-KS), and other national security officials, are able to enforce loyalty to America in the bureaucracy and weed out the spies.

“America First” has to be more than a campaign slogan; it has to be a requirement for U.S. foreign policy and applying for a federal job.