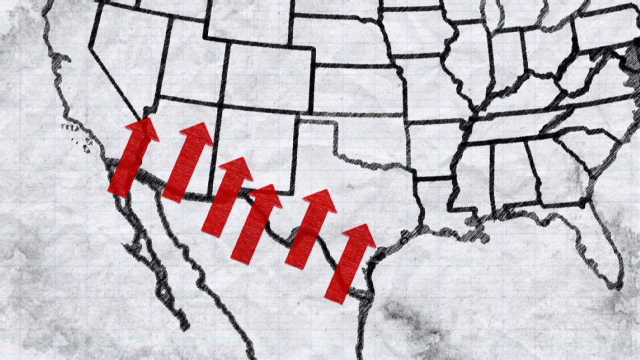 There was bad news today from the border. Various media outlets reported that in the 2016 fiscal year, more than 408,000 illegal aliens crossed the southern border–that we know of! Only God and maybe George Soros know how many slipped in undetected. And many of the illegal aliens were from Cuba, Haiti and the Muslim nations in the Middle East.

President-elect Trump is on the spot by promising to handle the immigration problem. We will see if he has the character and determination to lead the Congress to keep his promise. He sure has a mandate to get the job done.
As the population expands, the cost of services must expand. More police, firefighters, health inspectors, schools, and teachers. If immigrants don’t pay their share, then legitimate taxpayers must pay the bill. Of course, adding new non-producing families does not always add cost to all government programs such as national defense, scientific research, spending on veterans, etc. Such costs are not impacted by any number of illegal immigrants; however, that would not be the case for fire and police protection and school teachers, and road repair.

If a citizen receives a benefit which he or she has not financed through taxes then someone else has had to pay that share. I caused a stir on national television when I stated, “If I get money I did not earn then someone earned money they did not receive. That’s thievery.” I added fuel to the fire by adding, “This nation of producers has become a nation of parasites.” Amazingly, the whole crowd stood to their feet and cheered! (And it wasn’t a Christian or conservative or political crowd.) Most people expect to pay their own way and consider it poor character if they don’t.

A few years ago, I was told by a post office official in San Luis, Arizona that their office has 11,200 post office boxes in a town of about 3,000 people because people living across the border in Mexico use them as a permanent American address to collect public benefits. Courtesy of YOU. Don't you feel warm and fuzzy knowing that you go to work each day to support parasites across the border?

Since people migrating from Middle East nations, Mexico, and South America often have lower skills, they are more likely to request public assistance, gorge the public school system, overwhelm the health care industry, and spike the crime reports. Bigotry? Not at all. Just the facts. Did you know that 15% of California students are illegal aliens and they cost California citizens over 11 billion dollars per year for health, education, and incarceration!
Moreover, 25% of inmates in federal prisons are criminal aliens and are not in prison for being gatecrashers but for committing crimes in the U.S.! Furthermore, about 300,000 of all state and local prisoners are illegal aliens! You are funding them! Additionally, 75% of those on the most wanted list in L.A. are illegals. The following stats from  the Foreign National Crime Information Center should sober any pro-immigration zealot:
Furthermore, information in the FBI’s 79-page National Gang Report published in 2013, proves to any reasonable person that illegal immigrants are a major threat to all Americans especially, but not exclusively, along the southern border.

But it gets worse! Foxnews.com continued to report that there are about 2.1 million “legal or illegal immigrants with criminal convictions living free or behind bars in the U.S., according to Immigration and Customs Enforcement (ICE) Secure Communities office! Each year, about 900,000 legal and illegal immigrants are arrested, and 700,000 are released from jail, prison, or probation. ICE estimates that there are more than 1.2 million criminal aliens at large in the U.S.” Sleep well tonight, friends.

According to the FBI, criminal gangs are wreaking havoc in the U.S., with 65 jurisdictions nationwide reporting gang-related offenses committed with firearms account for at least 95 percent of crime in those areas. Gangs are responsible for an average of 48 percent of violent crime in most jurisdictions and up to 90 percent in several others, according to National Gang Intelligence Center analysis.

U. S. gangs consist of several types of groups, including street gangs, prison gangs, motorcycle gangs, and ethnic and organized crime gangs. Approximately 1.4 million people were part of gangs as of 2011, and more than 33,000 gangs were active in the United States.

Furthermore, criminal street gangs—mostly comprised of illegal immigrants—are responsible for the majority of violent crimes in the United States and are the primary distributors of most illicit drugs.
Now, build your case for immigration!

This article was originally published on CSTNews.com