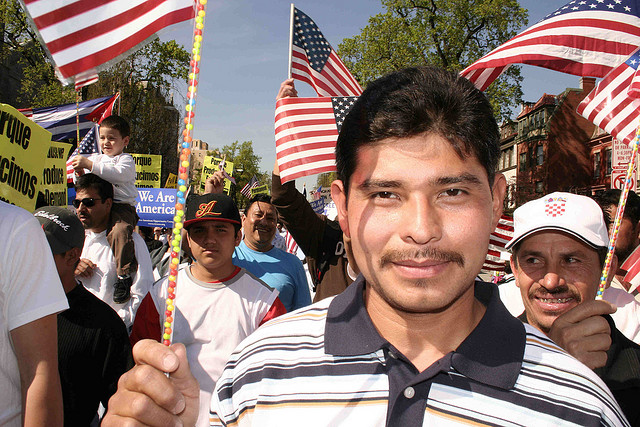 This month’s headlines shouted, “Flood of illegal immigrants continues at Texas Border,” and “New Border Crisis: Pakistani Illegals Up 935%, Haitians 1,300%.” You had better read that again! Many of the just-arrived illegal aliens asked, “Where do we go to get our amnesty?” For the last two years, many of the illegals are unaccompanied children, some of whom are delivered to relatives who themselves are illegal aliens and authorities do not ask about their status! And the ACLU filed a suit demanding each and every illegal alien must have a lawyer and YOU will pay the bill.

The message sent to every person: sincere refugee, thief, terrorist, or thug is “If you get here, you can stay,” so they come by the trainloads. The message told them is that when they come, they will be handed a bag of freebies: education, medical care, welfare payments, legal advice, etc. In that bag of goodies the illegals hope to find amnesty.

Hispanic extremists continue to raise the ante to get as much as they can; after all, we “owe” it to them. One sign demanded, “Give us FREE Health care, Jobs–no taxes, House, Food - You OWE us America! We will shoot more police in Arizona until we get FREE!” Has anyone but me asked why that person did not go to jail? Another sign demanded, “Citizenship for 11 million.” And citizenship means more Democrats to vote to guarantee all the freebies. And some Republicans are too stupid or cowardly to resist it. The pro-amnesty zealots have written what they call a “Bill of Rights for Undocumented Americans” in which they make their demands to U.S. officials.

Here’s an appropriate analogy: You have worked hard, saved, and finally built a nice home, not a palace, but a nice home. One evening a man walks in your unlocked door and asks for food and water. You are surprised and offended but kindly provide his request. As he eats at your table, he starts to watch television and moves to your favorite chair. You think he is being pushy but you want to be a thoughtful host. He stays all evening and when you suggest that it is time for you to go to bed, he asks where he can sleep. You don’t have a spare bedroom but he decides that he will take yours. After all, it’s a matter of humanity.

The next day he informs you that he likes the area and has decided to stay; however, you tell him that is impossible. You have your own life to live; but he demands that you accommodate him, even build an additional room for him. You are incensed but you do as he demands. Later that day he informs you that his religion requires special foods and he would like to have it prepared for the evening meal. He specifies no pork or shrimp and any beef or lamb must be prepared to exacting standards. He prefers to eat at 6:00, sharp.

He settles down in the new room you built at your expense but he tells you that he has some health problems and needs for you to get him a doctor–at your expense. Next, he is concerned about his future so he wants you to provide him a retirement program. He observes your frustration, anger, and resentment; and with a sinister smile, he suggests, “You should have stopped me at your front door.”

Only a fool would acquiesce to such free-loading tyrants. But that’s where the U.S. is with illegal aliens. They are here and they are demanding their “rights.” It is called their “Bill of Rights,” but it is only a start! They want any talk of building a wall stopped as well as talk about airline security since it is “chest-thumping rhetoric.” They arrogantly demand that everything is “on the table.” That means legal residency–citizenship.

The first demand is “Acknowledgment that we are already here, that we are human beings with a right to be, that our mere presence cannot be deemed illegal or our existence alien.” Well, just because they are humans does not justify legal existence in the U.S. Another demand is “Affirmation that we are to be treated with dignity and respect, not just because of who we are, but who you are.” Who I am determines how I react to freeloaders who don’t display much dignity, humility, gratefulness or respect for our laws.

Another demand is the “right to be presented with a path to citizenship… combined with interim deferment of all law-abiding Undocumented Americans against detention and deportation.” But there are problems in that criminals cannot become U.S. citizens. Plus, there are procedures that must be followed and requirements met. It is rather asinine for them to use the term law-abiding.

Still another demand is a “Guarantee of wage equality with a legal right to petition for wage theft or workplace mistreatment without jeopardizing our immigration status.” Maybe when pigs learn to fly in formation over the White House!

And another demand is “Assurance of humanitarian treatment, including medical care.” That just broke the bank.
It is my humble opinion that anyone who agrees with the above is incompetent, inconsiderate, or insane. It is similar to a lifeboat overloaded with survivors floating in the frigid Atlantic. The boat is just above water and a 300 pound man swims along and demands to be pulled aboard. Of course, everyone is compassionate, concerned, and contrite about his plight but they also know that if he is pulled on board, everyone drowns. He is left to drown because there was no other option.

Life requires very difficult decisions at times. This is one of those times:  no more immigration for five years and no amnesty to law-breakers.

After all, the “boat” will only hold so many and if others climb on board, we will all go down with the ship.
No amnesty! It is divisive, destructive, dangerous, and deadly! And dumb!