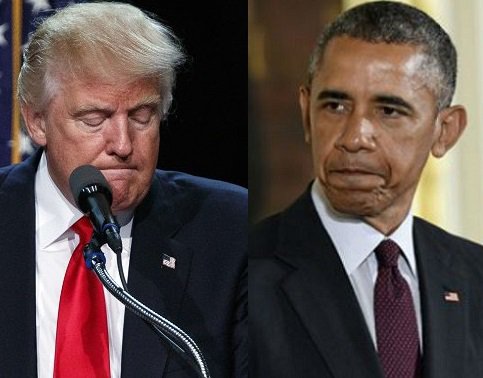 A few days before the New Year after awakening from a dream, the Lord began to speak to me about Barack Obama becoming a thorn in the flesh to Donald Trump. The revelation that I was receiving was that Obama would not leave quietly but rather hang around to poke at the new President, Donald Trump. Past Presidents for the most part have not criticized the incoming President, but the 45th President of the United States will not have that luxury. In fact, he will be criticized with every decision by the relentless media and Leftist ideologues. There are some news outlets claiming that Obama plans to be a thorn as well. So what is a thorn in the flesh and how will it improve the Trump Administration?

Christians have misunderstood the thorn in the flesh concept as quoted by the Apostle Paul in II Corinthians 12:7 “And lest I should be exalted above measure by the abundance of the revelations, a thorn in the flesh was given to me, a messenger of Satan to buffet me, lest I be exalted above measure” (NKJV). Too often believers will argue that this thorn is some sort of illness that Paul must bear and therefore theologically helps to explain why Christians remain sick or injured. This creates what is called an “unbelieving believer.” Healing has nothing to do with the thorn of the flesh, but it is likely that God will use Obama as a thorn in the flesh to Trump in order to bring about healing to our land by awakening the church.

So what exactly is a thorn when it is poked into our flesh? It is an irritant that makes us aware of an ongoing problem that must be addressed. The Bible shows us that a thorn in the flesh is a person or people group who feels it is their job to harass someone they disagree with. In Numbers 33:55 we learn, “But if you do not drive out the inhabits of the land from before you, then it shall be that those whom you let remain shall be irritants in your eyes and thorns in your sides, and they shall harass you in the land where you dwell.” This message was given to Israel about letting people stay within their borders that God instructed them to exile. An analogy could be linked to America in that those who oppose our Constitution must be removed from all places of power, or they will continue to harass “We the People.”

It does not take great discernment to notice the humbling process that God has had Donald Trump on during the past year or so. It is likely that this process will continue through thorns in the flesh. It will however backfire on the “thorns” of which Obama and Kerry seem to be the most vocal. One of the revelations that occurred following the dream was that the “media” would give equal coverage to Obama and his past administration in 2017 as they would to the Trump Administration in an attempt to delegitimize Donald Trump. This will anger most Americans, which will further dismantle the lame stream media.

The year 2017 will be filled with hope. The irritants that remain as thorns to Donald Trump will actually ignite more hope and awakening in America. So what do we do about these thorns? Here are some suggested prayer points:

Pray for the Trump Administration to be courageous despite the irritations. Pray that these thorns actually expose the evil assigned against The United States and its Constitution. The thorns in Paul’s day were the Pharisees and other religious leaders, and their opposition actually helped to spread the Gospel. Pray for Awakening in America and other nations. Pray for the removal of the thorn(s) once God has accomplished His goals with them. Now for the last bullet point. Can thorns be removed? Was Paul’s thorn in the flesh removed during his lifetime? The answer is “yes.” The last verse of the Book of Acts proves the thorn was removed at some point in the life of Paul. Acts 28:30-31: “Then Paul dwelt two whole years in his own rented house, and received all who came to him, preaching the kingdom of God and teaching the things which concerned the Lord Jesus Christ with all confidence, no one forbidding him.” This reveals that thorns were no longer present. No one opposed him during his final two years.

As we pray for the incoming presidential administration, we must remain hopeful that the thorns will be removed in Donald Trump’s life. He may or may not “preach” the Gospel, but he will help restore the Republic with life, liberty, and the pursuit of happiness. Christians are under attack today in the United States like no other time in our history. As we pray and preach the kingdom of God, we will have the support of the Trump Administration. Be encouraged that thorns remind us of who we are, and Whose we are!