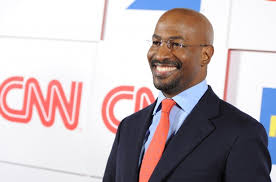 In his blockbuster new film, “Civil War 2017,” Trevor Loudon asks why the political left is so determined to destroy the Trump presidency. Matthew Vadum of the Capital Research Center responds that Trump “doesn’t back down from a fight,” unlike previous “squishy” Republicans. What’s more, Trump has upended the “progressive coalition” by convincing millions of Democrats to abandon their union leaders and the Democratic Party.

Marxism is at a crossroads. And so are its adherents in the media, such as Van Jones of CNN. Jones is smart enough to know that Trump has tapped into the anger and discontent of American workers. But at the same time, he is compelled to rally what remains of the progressive coalition against Trump. That is why he spoke at the “Women’s March on Washington” on Saturday, and then went on CNN to comment on what he said.

You may have missed the highlights. It featured filthy language, transgenderism, the benefits of killing the unborn, rights for illegal aliens, and pure unadulterated communism.

By way of background, remember that the workers used to be the cornerstone of the revolution. The phrase, “Workers of the world unite,” is right from the Communist Manifesto. These workers are now behind Trump. They want jobs, not heroin. They want economic and industrial development in traditional fossil fuel industries that the Democratic Party has been trying to bankrupt through the climate change hoax and green energy scams.

The demonstration was financed by the abortion industry front known as Planned Parenthood and the environmentalist group called the Natural Resources Defense Council (NRDC). The one union leader who spoke at the demonstration was George Gresham, president of the largest labor union in New York City representing health care workers.

Where were the leaders of the industrial unions? They were nowhere to be found. And that is because many of their members voted for Trump.

The involvement of the NRDC is a reflection of the suicidal tendency that infects the Democratic Party. The NRDC’s logo used to be a grizzly bear and later became a polar bear to shift the focus to climate change. This may appeal to liberal elites, but the workers who backed Trump would like to see some compassion for the workers losing their jobs to bad trade deals and climate change agreements that deindustrialize the U.S.

The so-called women’s march featured communists like Angela Davis, transgendered people, Muslims, foul-mouthed Hollywood celebrities, and illegal aliens. This group represents the strain of Marxism known as Cultural Marxism. It cannot co-exist with workers who still retain love of country and “cling” to traditional religious values. They don’t want to lose their jobs to illegals.

At the women’s march, backed by important members of the Democratic Party, we had an unrepentant communist who not only spoke but served as a co-chair. In our column, “Black Power Icon Goes Vegan to Save Animals,” we noted how Davis has tried in her career to cover all of the Marxist cultural bases. She started out with the Communist Party, became a lesbian, and is now a spokesman for animal rights. Along the way, she was given the Lenin Peace Prize.

However, the bio of Angela Davis at the demonstration’s website makes no mention of her communist affiliations.

Peltier killed two FBI agents, while Abu-Jamal and Assata Shakur are convicted cop-killers. Shakur fled to Cuba and is living under the protection of that communist regime.

Davis was followed to the podium by Raquel Willis, a self-described queer black transgender feminist woman.

As if the parade of Marxists, sexual oddballs, and misfits was not enough, several Hollywood celebrities and “artists” turned out. The entertainer named Madonna was more extreme than usual, and talked about blowing up the White House amid using the F-word. Actress Ashley Judd’s “Nasty Woman” routine was filthy, gross and offensive. The march was definitely not family-friendly.

If you want to understand why the workers are turning on the Democrats, some of the performances at the women’s march will help you understand why.

The media were represented as well. Van Jones, a speaker at the rally, was identified on the march’s website as “President of Dream Corps” and “CNN Commentator.”

“Van Jones is a CNN political commentator, regularly appearing across the network’s programming and special political coverage,” says his own Dream Corps website. “In 2009,” the bio says, “Jones worked as the green jobs advisor to President Barack Obama.” What it doesn’t say is that he was forced out of that job when his communist background was exposed. He had been involved in STORM (Standing Together to Organize a Revolutionary Movement).

Jones’ Dream Corps, the latest organization he has created, claims to champion “World-class support for world-changing solutions,” whatever that means. Its “partners” include Trinity United Church of Christ. Remember Jeremiah Wright’s and Barack Obama’s church?

The group also boasts of some heavy hitters as donors, including Facebook, Google, the Ford Foundation and the Executive Office of the President of the United States.

The latter is significant. Jones lost his White House job only to get funded by the Obama White House. It’s interesting the way that worked out.

It is also interesting to note, however, that when you click on the Dream Corps donor logo for the presidential office, you immediately go to the website of President Donald J. Trump. It seems that the website has been updated.

It’s unlikely that the new administration will be financing Van Jones’ latest scheme. But he’ll no doubt continue to be on the payroll of CNN, where, among other things, he has done programs on what is called “The Messy Truth.”  How appropriate.