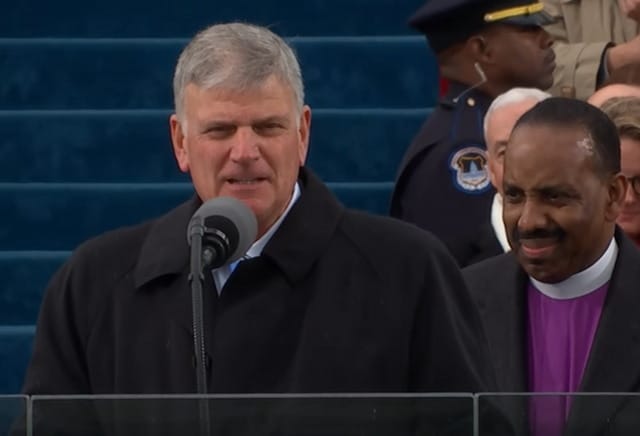 Sometimes even the most illustrious words can bury the beauty and the deep meaning of a glorious moment – we will attempt to refrain from burying what may have been the most stirring Presidential inauguration in America’s history with too many words.

The crowds across the mall were superbly self-controlled and respectful, all standing as a cross section of America’s best.

Law enforcement on every level handled themselves with professionalism and respectfulness.

The tears in VP Mike Pence’s eyes after he was sworn in which revealed the heart of a man of compassion, purpose, and love for his nation.

The speech of President Trump was highlighted, first, by his call for God’s protection on our country and the proclamation that the power of our nation was now being handed back to the people. He vowed to wipe Radical Islamist Terrorism off the face of the earth and he called Americans to unite. It was a succinct, powerful, patriotic and totally all-American speech that will grace the pages of our national history.

Altogether the inauguration was a credit to the heritage of all Americans who love this nation and want to see it unified, flourishing, and shining as an example of righteousness throughout the entire world.

Then along comes the most varied group of invocators and ministers to represent the historical Judeo-Christian heritage that has been the very foundation of our nation from the beginning.

To name and note just a few of them should suffice.

Cardinal Dolan called for great wisdom for Mr. Trump, the VP, and cabinet.

Paula White invoked the full blessing of God on all that President Trump sets his hand to do.

Rabbi Marvin Hier’s stirring reading from the Psalms was punctuated by some marvelous comments like, "A nation’s strength lays in its values not its vaults."

The benediction of Rev Wayne T. Jackson who skillfully used the song lyrics of the late Mahalia Jackson to rouse the call of strong belief in all that is good and right.

Finally, we come to the prayer of Rev Franklin Graham. It was a two-pronged victory for God, Graham, and our entire nation.

First, Rev Graham has been vindicated from the dis-invite he received when asked not to speak at the National Prayer Breakfast in 2015 for his remarks about Islam. Mr. Obama may have rejected Graham’s prayer at the breakfast, but God has shown both Obama and the nation that he has honored His servant.

Secondly, Rev Graham managed to proclaim the gospel and the name of our Lord Jesus Christ in what may be the most concentrated scriptural declarations of the gospel in the entirety of the Bible. It was a master stroke, no doubt guided by the Master Himself.

This is the passage Graham quoted:

“I exhort therefore, that, first of all, supplications, prayers, intercessions, and giving of thanks, be made for all men; For kings, and for all that are in authority; that we may lead a quiet and peaceable life in all godliness and honesty. For this is good and acceptable in the sight of God our Saviour; Who will have all men to be saved, and to come unto the knowledge of the truth. For there is one God, and one mediator between God and men, the man Christ Jesus.” (1Tim 2: 1-5)

We are off to a good start America; pray that we may follow it through.