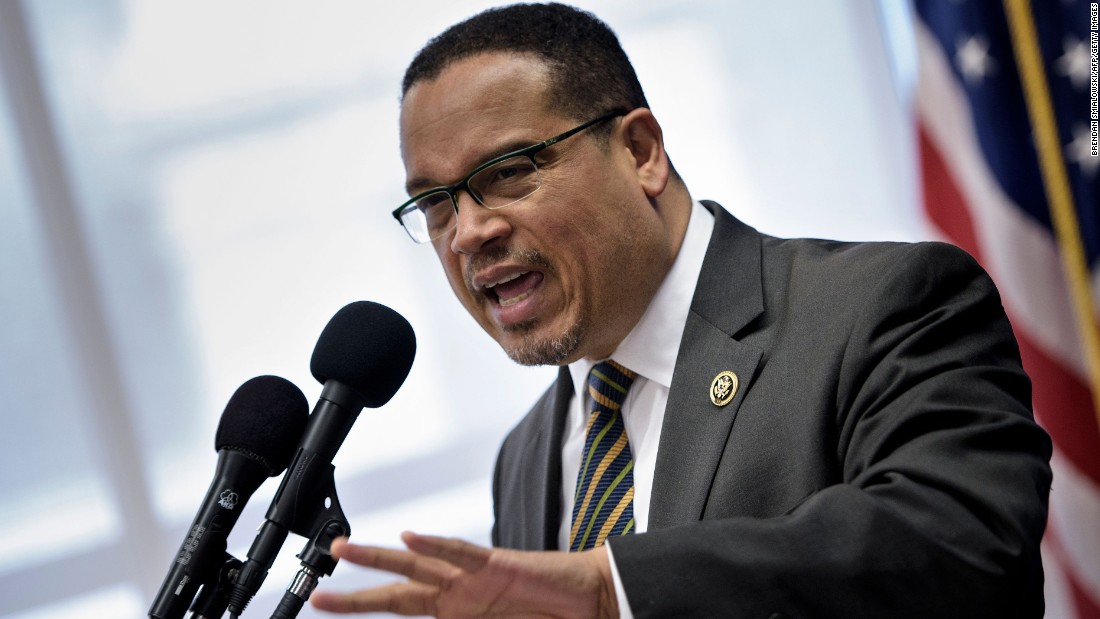 The Huffington Post’s headline, "Minneapolis Jewish Community Defends Rep. Keith Ellison against Anti-Semitism Allegations", indicated that Ellison (D-MN) was making his bid to head the Democrat National Committee. But are such allegations against Ellison implausible?

Consider that the Democrat Party has been leaning further to the left for some time, relying on a voter base that has been under-informed, spoiled, weakened, and entitled. The ugly result is a nation divided by political party, race, financial success, gender and religion, a society consumed with bigotry and disorder. Therefore, it is not inconceivable that an anti-Semite could take the stage from which liberals abandoned their traditional values of Judaism and Christianity in favor of the creed of multiculturalism and its deceptive liturgy of peace and ecumenism.

Enter ISNA (Islamic Society of North America), an affiliate of the Muslim Brotherhood that has been diligently marketing a false similarity between the so-called “three great Abrahamic faiths.”  Jewish congregations, guided by leaders unaware of the unalterable nature of Islamic dictates and their incompatibility with western values, welcome the interfaith programs, hoping for a dialogue of peace with the Islamic world.

The rabbis are irresponsibly under-informed about Islam’s resolve to dominate the entire world – through violence when in the majority and by deception when not. They are either oblivious or unwilling to acknowledge the history of Islam and, specifically, Jewish history under Islam, and its current bloody manifestation across the globe. Therefore, they are unqualified to advise their congregations on this subject. They are the blind leading the blind, both doomed to blunder.

If the rabbis have ever heard of BDS (boycott, divestment and sanctions) or of the Jewish students who must defend themselves across our campuses, they remain silent. Neither do they deliberate the doctrine of the Muslim Brotherhood, “It is the nature of Islam to dominate, not to be dominated, to impose its law on all nations and to extend its power to the entire planet." The invading Muslim migrants who behead and rape the host populations, create no-go zones, and generate a fear that prevents the innocent from wearing religious symbols are also off the table. I speak from experience; I have attended such events.

In a country the size of the U.S., where her citizens have already been conditioned to set aside their Judeo-Christian ethics, the Jews eschew the Torah’s morality and guidance, and accept baseless equality. Sincerely, but naively, desirous of harmony, a substantial number of American Jews have been motivated to abandon their identity to their religion, nationhood and common history, and align themselves with socialism, leftism, communism, and Islamism – globalism. Seventy-two percent of Muslims voted for Obama; 40 percent of Muslims in America want Sharia standards; 46 percent of Muslims believe Americans who criticize Islam should face criminal charges; of these 7.2 percent believe execution should be the penalty. The Jews evidently see Islam through a lens of moral equivalence and sacrifice their own morality, competence, and courage.  Eighty percent of the Jews voted for Obama.

Terrorism and civilizational jihad succeed when freethinking liberals are separated from their
faith, Jewish or Christian, and the rally for Palestinian statehood over Israel’s survival inevitably follows.  Although Jews may still oppose the revisionist denunciations of the Holocaust, they irrationally accept the new revisionism – the false narrative of the Palestinian demand for statehood on Jewish soil or the fleeing Syrians’ need for Western safe havens.

In 1979 Brigadier S.K. Malik of Pakistan explained, “Psychological dislocation is temporary; spiritual dislocation is permanent.” The Minneapolis Jewish Community is an example of “spiritual dislocation” when they accept those who have openly declared war on the Jews and defend their anti-democratic doctrines. Indeed, they are apologists for Ellison. Despite Ellison’s revealed prejudices, tolerance remains the Jews’ driving force.

Rep. Ellison, the first Muslim to take his oath of office to the United States Congress with his hand upon the Qur’an, has made no secret of his pilgrimage to Mecca in December 2016, and its funding by the radical Muslim American Society (MAS) of Minnesota. MAS has strong ties to the Muslim Brotherhood, which the United Arab Emirates have declared a terrorist organization. All Muslims are obliged to perform jihad; 98 percent of the hadith is about jihad and war against the world to achieve dominance, either through terror and violence or through psychological warfare. As a faithful Muslim, true to his god and his prophet, Ellison must support jihad, anti-Semitism, misogyny and homophobia. He may pretend to defend the US Constitution, but his mission is to replace it with Islamic law, whether softly or by force – and foolish Democrat politicians not only stand in solidarity with Islam, but are also considering electing one of their band to lead their Party!

Ellison has been closely allied with the Nation of Islam’s anti-Semitic Reverend Louis Farrakahn, who is dedicated to developing Islam in America; with Reverend Al Sharpton, who called for beating Jews in the streets; and with Reverend Jesse Jackson, known for anti-Jewish slurs. Ellison has made several appearances at MAS events that hosted radical speakers, including Hamas leaders, and attended a 2010 re-election fundraiser, where support was expressed for Hamas, laments were articulated for an assassinated terrorist leader, and where Ellison condemned Israel for having too much influence on the US. In Islam, war is deceit and deceit is war. Ellison was obliged to decline the latest invitation to MAS, due not to preference, but to pressure.  But surely, while one may cease to frequent a preferred restaurant, should we really expect him to stop dining entirely?

Michael Latz, senior rabbi at the Minneapolis synagogue Shir Tikvah, claims the idea of Ellison’s being anti-Semitic is nahrishkeit (foolishness), but true nahrishkeit is the denial of danger warnings in the face of evidence, particularly if the nahr (fool) recklessly assumes responsibility for others.  Perhaps R. Latz would consider asking Ellison some questions on current issues of concern...

On Islam:
Does Representative Ellison consider Islam superior to all other religions? Does he agree with the credo of the Muslim Brotherhood, "It is the nature of Islam to dominate, not to be dominated, to impose its law on all nations and to extend its power to the entire planet." Will he work with his coreligionists to insinuate Sharia law into the US Constitution? Does he consider it reasonable to pressure Israel into negotiating with an assemblage whose charter affirms their commitment to Israel’s destruction?

On Israel:
There are twenty-two Arab states covering one thousand times the landmass of Israel. Does he support pressuring the one Jewish state to relinquish its land and Jewish identity for the Palestinians? By how much land would Ellison expect to reduce Israel? Does he support the 1967 Armistice lines for Israel’s borders even if that makes her indefensible? Does he consider the term “Palestinian” to be historically accurate and advocate their claim to the right of return even though their surnames reflect their origins as Egypt, Lebanon, Syria, Yemen, and Iraq? If he agrees with the concept of Land for Peace, should this apply to other countries?
Does he agree to Israel’s relinquishing the Golan Heights to Syria, even though the Arab residents under Israel leadership are living well, with good healthcare and schools that are not available to them in Islamic countries?

On Laws:
Twenty percent of Israel’s population is Muslim. Would he agree to a like number of Jews living in the new Palestinian state? Non-Jews are permitted to serve in the Knesset (Israel’s parliament), but Jews are not permitted to serve in governments of Arab countries.  Women have far fewer rights than men do, and homosexuals have no rights to live under Islam. Does Ellison consider Israel to be an apartheid nation and, if not, would he be willing to announce his opinion openly? Does he consider valid the Balfour Declaration that supported the formal establishment of a Jewish homeland? Ellison voted several times against funding Israel’s defense system. Has he done the same for funding Hamas? Do his donations go to the Brotherhood that supports Hamas? Has Ellison ever supported Israel’s defense in a neighborhood that repeatedly issues warnings and attacks Israel? Does he consider the Western Wall a Jewish or Muslim holy site? Hw about the Tombs of Joseph and Rachel?

On Terror:
Does Ellison justify the indiscriminate bombing of Jewish homes and schools from conceded territories of Gaza and Judea/Samaria (the West Bank)? Does he support the BDS movement and would he work to dismantle the Students for Justice in Palestine (JVP) and other radical Islamist groups that target Jews and Israel?  (Jews do not target Muslims.) The Israeli barrier, only 5% of which is an actual wall, dramatically reduced the number of Israel deaths by terrorism. Does he believe it should be removed? Is he aware of how many walls exist in the world, many throughout the Middle East, and the purpose they serve? Where does he stand on the issues of hijra (migrant invasion) in America?

Ellison’s defenders:
Can Ellison describe to Rabbi Sim Glaser of Temple Israel how he’s changed since he severed his ties to the Nation of Islam? Glaser says Ellison would “probably” ally with the underdog. What pro-Israeli actions did Ellison take when Obama set new perilous boundaries for Israel? When Iran threatened Israel? And each time he heard of kidnappings, murders, and terror attacks on Israelis by Palestinians? We have seen our laws whittled away to accommodate Muslims in universities across the country, in business and in government.  It is time for the Community to seriously reflect on what they might expect for Israel and the American-Jewish community, were Keith Ellison to become the leader of the Democrat Party.