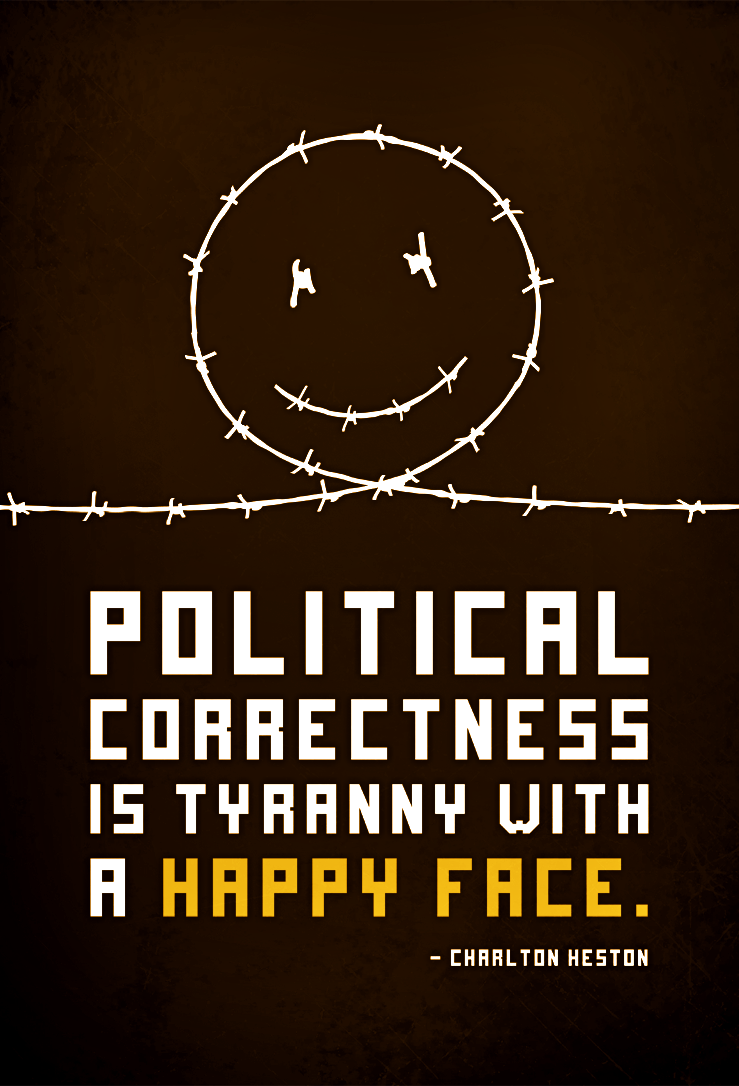 What is a Social Engineer? Social Engineering is about using words to move a society towards a pre-designed Revolution. Instead of guns, the weapon of choice is words. The language of culture change is what is commonly called “Political Correctness.” The process of getting someone to embrace the new language and thought patterns of postmodernism is called The Dialectic Process. You don’t have to understand this process to see its results in the new social order being thrust upon us.

How do you recognize a Social Engineer? They are constantly challenging your language. They make statements against the language of public figures and shame them into public apologies for not speaking correctly. Social Engineers are masters of verbal deception who use Political Correctness for oppression. Their victims are captured not behind the gulag but in an invisible net of fear of offense. Social Engineers constantly talk about offense. Forgiveness is not in their construct.

There is constant talk about what’s wrong. Discontent, prejudice, division and hatred have to be fueled. Even the word peace is used as a smokescreen to divide and conquer. Relativism is a creed. Any symbol of absolute truth is an enemy - especially the father or any authority figure. Destruction is constant. Emotions are habitually heightened. Keeping everyone thinking with their emotions clouds the rational thinking of the masses. They never think to question the kind of life they will have after the revolution. No one stops to ask what, if anything, we are building.

Social Engineers want everyone to speak Politically Correct. In Political Correctness, only certain arguments are allowed. Many important topics of discussion are off the table. Whenever a fact that disagrees with their narrative is brought forward, it is ridiculed as being “old fashioned,” “something we have moved past,” or “no one believes that anymore.” They want to remake the world into their own image and are rarely asked, “Who put you in charge?”

There is a law to lawlessness. Right and wrong are passé. Consequences are conveniently ignored. Political Correctness is the only language allowed to be spoken. Deceit is so commonplace it is accepted as normal. Social Engineers hate the facts and prefer opinions. They are worshippers of Relativism so they can believe and promote whatever pleases them at the moment. Social Engineers are message creators. They are storytellers in the worst sense of the word. Their stories have a social agenda and an emotional mark that touches the very soul of
their listeners.

A meme is a favorite tool of a Social Engineer. A meme is an unseen but real idea or concept that passes through a culture like a virus. Social Engineers create memes to promote their own ideas. They use symbols as icons and create messages around images like marketers do in advertising. No problem if the facts don’t support the meme. One of the skills of a Social Engineer is the ability to create one’s own “facts.” Like the Ministry of Truth in Orwell’s Nineteen Eighty-Four, the “truth” is whatever they say it is.

Social Engineers learn how to seize the moment. They take feelings of discontent and fuel them to new heights. They never let a crisis go to waste. When injustice occurs they use the failings of the system or the misappropriation of good laws to convince people the whole system is broken and needs to be replaced. Again, no one stops to ask, “What will life be like after theRevolution?”

The masses like the deceit and beg for more because it allows them to deny the inevitable consequences of their choices. Words like accountability, responsibility, authority, and truth are either done away with or redefined. If it is inconvenient, uncomfortable, or carries conviction, itis done away with by consensus.

Part of the process of Social Engineering requires that the masses get weaker and more dependent, and the leaders become more tyrannical and authoritarian. In the name of “freedom” or “revolution” essential liberties and personal dignity are gradually done away with. At this point, the masses have a brief opportunity to awaken but history shows that they usually choose the easier route of continuing the illusion.

The ultimate deceit is when the deceiver deceives the deceivers. At this point, destroyers costumed as builders get the emotionally-charged crowds to repeat the meme as true. The masses are the revolutionaries who supply the labor, tools, and money to destroy their own civilization in the name of revolution. After these revolutionaries have outlived their usefulness, the new tyrants turn on their prior supporters, who become the new victims. While they rally for a better future for their children, they are destroying any hope for their children to have a truly better life.

The ultimate tyrant – and that is what Social Engineers really are – gets the masses to beg for their own oppression. The well-conditioned mob installs their own tyrants thinking that because they are “their own” they can be trusted. By the time the masses figure out they have been used as pawns in a very ugly game, it is too late for now they are slaves in their former country. They begged for their slavery and they got what they asked for.

The leader who can take away the wealth of someone else and give it to you, can take away your wealth and give it to someone else. Marxism results in chaos which leads to anarchy which results in tyranny. Everyone, rich and poor, will be unhappy with the distribution, and eventually the system will run out of money and goods to distribute. When everyone is equally hungry they become equally discontent.

Transformational Marxists use words to deceive the masses into thinking the new society is good for them. The results are the same: loss of liberty, misery, poverty and despair. The methods are the only difference.

Traditional Marxists dress in military uniforms and gain political and military power. They use power, force, weapons and fear to take control. Bloodshed is necessary to whip the masses into compliance. Transformational Marxists look like everyone else and work through what Lenin called the “commanding heights of culture.” They are celebrities, artists, journalists, teachers, attorneys, civic leaders, politicians, clergy, economists, environmentalists, and leaders in every walk of life. A quiet revolution leaves the social structure intact and allows it to implode out of its own weight.

Social Engineering is not new. It is the tactic of tyrants throughout time. While tyranny has become more sophisticated, a modern tyranny by any other name still results in needless suffering. Social Engineers are change agents. According to Barbara Morris, a change agent is “a person, organization, or institution that changes or helps to change the beliefs, values, attitudes, or behavior of people without their knowledge or consent.” The change agent is the facilitator of the thinking of Postmodernism. A change agent uses deceit and manipulation to garner consensus for their vision of how the world ought to be.

Social Engineers really believe that their vision for the future is superior to the uninitiated and uninformed masses. Social Engineers are change agents for Marxism and Revolution. Marxism is the economic system of Communism and is founded on redistribution of wealth. Socialism is a transition word with the purpose of destroying Capitalism so that it can be replaced with Communism. Even people who would never consider themselves Socialists are now promoting the policies of redistribution. While convincing themselves they are acting for the public good they are really furthering the agenda of Marxism.

There are three groups of people in the world. Those who make things happen, those who watch things happen, and those who wonder what happened. The intent of the Social Engineers is no secret. For over a hundred years it has been published for the world to see if anyone is paying attention. An easy place to gain a basic understanding of the agenda and game plan of the Social Engineers can be found in the community organizer’s handbook Rules for Radicals by Saul D.Alinsky.

When the modern Social Engineers started to gain ground some of us issued warnings, but the possibility of such radical ideas ever gaining traction and becoming mainstream sounded too wild. At this stage it would have been easy to nip in the bud. But, the idea that anything so sinister could happen here was “unbelievable” and it was ignored.

Now that the Revolution is happening before our eyes many people are asking for an explanation. The problem is they don’t like the answer. The truth of how and why this is happening sounds too wild and radical and it is being questioned. There is still time to turn things around but the price will be very high.

Will we have to come to the place where the only question left is, “What happened?” before anyone will listen to those of us who are watchmen on the wall? At that point, it will still be the truth, and it will still sound radical, but it will be too late to do anything about it. All that will be left is mourning. The hopes and dreams of our children will be gone and the suffering of the masses will be severe. Even the masses that begged for their own tyrants will realize that liberty, with all its problems, is far better than the empty promises of tyrants.