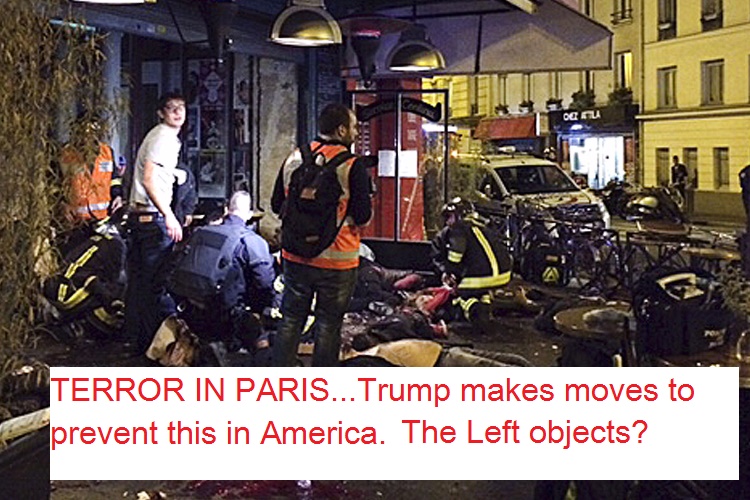 CLU shattered fundraising records with false rhetoric about President Trump’s executive order on vetting refugees.
Newsweek reported the ACLU received a record $24 million in online donations over one weekend following President Trump’s pause on immigration from dangerous nations. Online donations to the ACLU are normally $4 million in a regular year.

The donations were boosted by Hollywood entertainers promising to match all contributions. The fundraising is also in corporate America as companies like Lyft commit millions.

The ACLU needs to give their marketing department a big raise. The ACLU deceptively made up the title “President Trump’s new Muslim ban,” to the Presidents Executive Order that is actually named “Protecting the Nation from Foreign Terrorists Entry into the United States.”

The order, for 90 days, stops immigration of people hailing from Iraq, Syria, Iran, Libya, Somalia, Sudan and Yemen. Six of the countries are failed states known to have large ISIS activity, and one, Iran, is a sworn enemy of the U.S. and worldwide sponsor of terrorism. Those countries were named in a 2016 law concerning immigration visas as "countries of concern." The same order also suspends the US Refugee Admissions Program for 120 days, and refuges of Syria indefinitely, until it can be determined how they can be properly vetted.

This was an enormous campaign issue. Why are now people shocked that President Trump did what the voters asked him to do? No religion was named in the order.

The ‘War on Christianity’ is now the ‘War on Trump.’

The ACLU lost the ‘war on Christianity’ with the election of President Trump. Now they are fundraising on creating lies and protests against the very actions the President was elected to implement.

The American Civil Liberties Union (ACLU) is the frontline army in the courts for the left-wing agenda. In 2015 they opposed the Religious Freedom Restoration Act and is now often referred to as the “Anti-Christian Litigation Unit.” They’ve been consistently suing to remove God from society. In an interview concerning a town being sued by the ACLU for having a cross on a Christmas tree, Rev. Franklin Graham said “the ACLU wants remove God from everything.”

This last election proved Americans were so fed up with the attacks against their beliefs and the direction of the nation, they went to the polls and elected Donald Trump President. The Left-wing was defeated heartily and is now hysterical as they have lost not only the White House, the US House and Senate, but also a record number of Governorships and State house majorities.

However, the 2016 election was not only about freedom of religion and conservative social issues. It was about terrorism and keeping what is happening in Europe off of America’s shores. It was about the growth of ISIS and the devastating genocide in Syria, horrific persecution of Christians in the Middle East, and the refugee crisis that has made some European cities dangerously unrecognizable.

The ACLU and those that finance it do not consider the refugee issue was one of the primary issues that drove conservatives to the polls in 2016. Americans wanted action taken, the President took action, and now the ACLU is suing in Federal Court to fight it, and raising major funds off of it.

Fear sells. The ACLU is using made up fear tactics to enrich its coffers.

Why is the Left so shocked that President Trump is implementing the promises that won him the election?

Conservatives and Christians should not support companies that support the ACLU.

LYFT, the alternative to UBER, sent out an email to all its customers on January 29th, 2017 ranting against President Trump’s Executive Order on vetting refugees.

Lyft is committing $1 million over the next 4 years to the ACLU in response to the President’s Executive Order.
Personally, I really liked LYFT. They are less expensive than Uber, have nice drivers with clean cars. I have recommended many to LYFT and used them exclusively when I don’t have my car - that relationship now ends!

A week after returning from the Inauguration in DC where I had used Lyft for all of my transportation, I got the email. I had been looking at all my credit card charges made with Lyft while celebrating the election of President Trump.

Then I received the following:

“Hi Robin,
We created Lyft to be a model for the type of community we want our world to be: diverse, inclusive, and safe.
This weekend, Trump closed the country's borders to refugees, immigrants, and even documented residents from around the world based on their country of origin. Banning people of a particular faith or creed, race or identity, sexuality or ethnicity, from entering the U.S. is antithetical to both Lyft's and our nation's core values. We stand firmly against these actions, and will not be silent on issues that threaten the values of our community.
We know this directly impacts many of our community members, their families, and friends. We stand with you, and are donating $1,000,000 over the next four years to the ACLU to defend our Constitution. We ask that you continue to be there for each other - and together, continue proving the power of community.
John & Logan
Lyft Co-Founders”


My response to LYFT -

“I have recommended many to Lyft, I considered being a driver for extra income, but after receiving the email from Lyft stating that you object to screening and vetting people coming into America from nations rampant with terrorism, it is obvious that either you do not know the facts of the actions of President Trump, or you do not care about the long-term safety of America. I served in Iraq, I have Iraqi and Iranian close friends. Your letter and stance on this issue was ignorant and counterproductive and I will NEVER do business with you, and am calling for a boycott of your company.
Please cancel my account immediately.”


When will Corporate America, and Hollywood, understand that Americans voted for President Trump for a reason? We actually understand the issues and voted accordingly. How can companies expect to attack the beliefs of Americans and still expect to receive their money as customers?

Lyft should be boycotted by conservatives. Not one penny of our money should go to help fund the ACLU.

(More information on companies that financially support the ACLU and other left-wing organizations can be found at 2ndVote.com. They keep track.)

Most claims about Trump’s visa Executive Order are false or misleading; Legal Insurrection