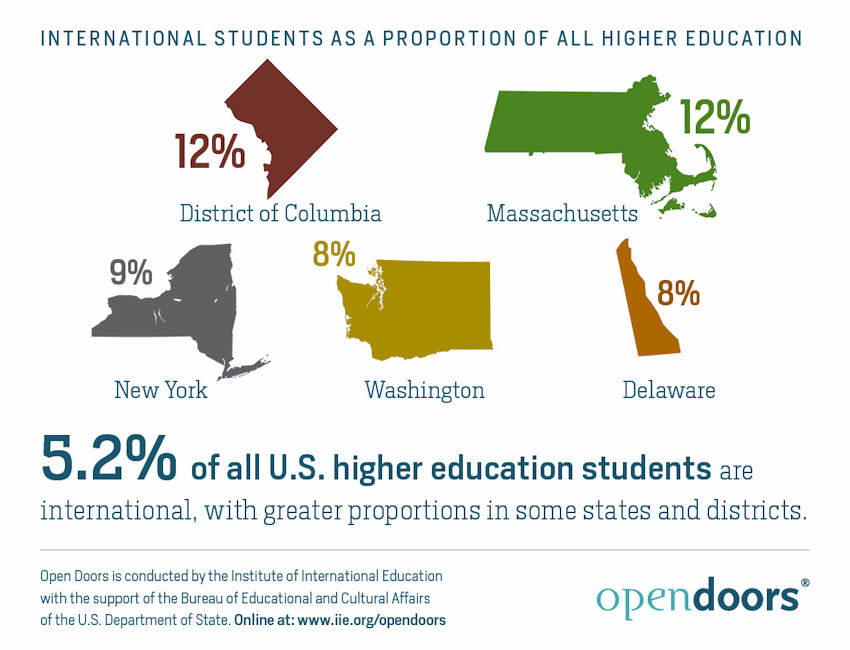 In a recent article, “Surge in foreign students may be crowding Americans out of elite colleges,” The Washington Post stumbled on the truth about one of the factors affecting the rising cost of college for American students. The percentage of foreign students enrolling in both public and private colleges and universities has skyrocketed. Their sponsors, Middle East governments and regimes like China, buy their way into American colleges and universities for their own students, forcing up costs for the dwindling number of Americans fortunate enough to gain admission.

It is estimated that over one million international students are enrolled in U.S. colleges and universities. That figure has doubled in 15 years.The growing international enrollment is crowding out qualified U.S. students.

But the Post, staying true to the liberal/libertarian orientation of its owner, Amazon’s Jeff Bezos, tried to play down the serious nature of the problem. “International growth has fostered an increasingly cosmopolitan culture on campuses across the country, with academic benefits for domestic and foreign students alike,” the Post claimed. “It gives colleges an additional path toward ethnic and racial diversity, opening doors to students from Africa, Asia, Latin America and Europe. But it also injects pressure into the admissions scramble that U.S. high school seniors are starting to experience this month as schools release early-admission decisions.”

With that final sentence, the paper alluded to how American high school students are losing slots to foreigners. The claims about a “cosmopolitan culture” and “diversity” sound attractive, but the benefits for the American students lucky enough to get into these colleges were not clearly defined.

Trent, who contributes to a blog sponsored the Capital Research Center and writes frequently on education, says that she found that at one university, a faculty member noted that one in 10 of the freshman seats was “going to the children of plutocrats from a repressive, communist state,” Communist China. “This is something that is going on at both public and private universities and colleges,” Trent told Accuracy in Media.

The foreign students are paying the full cost, since money is no problem for the regimes that sponsor them. Yet, their financial contributions do not reduce tuition for the American students lucky enough to get in, and the public dollars continue to flow.

“When these institutions give classroom chairs to foreign students, they are unilaterally choosing to transfer our tax dollars to foreigners,” she explained. “The excuses the schools have given over the years include the virtues of globalization and exposing Americans to ‘diverse’ foreign cultures. But in reality, administrators are mostly motivated by the fact that they can charge foreign students higher tuition.”

Trent said that in Florida, where she taught college classes as an adjunct professor, she watched friends struggle to get their own children into a university system they paid for with their own tax dollars. “Even when they get into schools, certain classes in the hard sciences are extremely hard to access. Yet these schools still manage to find room for rapidly increasing numbers of foreign students,” she added.

She said that with the extra tuition money provided by foreigners, on top of the public funds, administrators are sponsoring and promoting useless and politicized “studies” programs that justify bloated salaries for themselves. A concrete example of this trend is the proliferation of “diversity and inclusion” departments or offices on college campuses. Such departments or offices literally spend hundreds of thousands of dollars on speakers like communist Angela Davis and conferences devoted to feminist or radical black studies.

Trent said the students from totalitarian states, be they Islamic or Chinese, are pouring money into administrators’ pockets, but the anti-American attitudes these students often bring with them are not being corrected. “Nor are the administrators criticizing the regimes from which these students come,” she added. However, white male American students are immediately judged as racist, sexist, homophobic, etc., and ordered into “diversity” training sessions.

“So you get this ironic situation where university administrators who find Klansmen under every rock when it comes to their American students, are running cover for plutocrats from China and slave-owners from the Middle East who violently oppress women,” Trent said. For example, “You won't find many Women’s Studies professors criticizing their own school’s administrations for admitting students from countries that practice female genital mutilation, or forced abortion, or who murder rape victims.”

“As these totalitarian regimes gain footholds in American universities by making direct donations and purchasing larger and larger percentages of classroom seats, those regimes are gaining tremendous influence over the research done by these schools,” she said. “The increasing anti-Israel bent of Middle Eastern Studies programs is just the oldest example of such crudely cash-based ideological colonialization of American higher education.”

Foreign students put other burdens on schools. Trent says that colleges and universities usually use underpaid adjunct lecturers and instructors to teach freshman composition classes and tutor foreigners who don't speak fluent English. “I know adjuncts, and also graduate students, who spend hours of essentially unpaid labor tutoring scores of such students who don’t speak enough English to be attending an American school in the first place,” she said.

As President Trump grapples with such issues as the high cost of college and student debt, Trent says Congress and the states should be holding “America First” hearings “to determine the size of this new influx of foreign students and its specific effect on the ability of American students to gain access to higher education.”