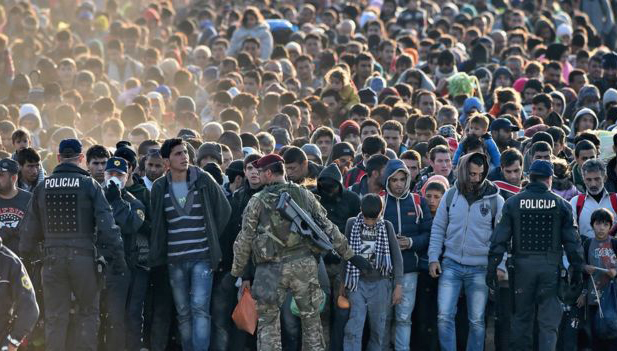 Many Evangelical leaders who beat the drums for more immigration, amnesty, and sanctuary cities are moral cripples who have sold out for payment, power, or position. Such religious leaders who are afraid to swim against the tide of public opinion and be labeled conservative or fundamentalist (gasp!) are moral cripples who are not aware of their limp and crooked walk.

Leading Evangelicals are at it again – taking a legitimate issue and twisting the facts for an unreasonable, unacceptable, and unbiblical result. They are beating the drums for more refugees (a tragedy if only one terrorist is included) being admitted into the U.S. and shamelessly attacking the conscience of Christians to win their spurious argument. They conjure up helpless, hopeless, and hapless citizens from Muslim nations who must be settled in the U.S. But they are dishonest, very confused, or fanatical.

The drum beaters have a major job ahead of them because Christians have clearly spoken on this issue. A Pew survey conducted before the election reported that about two-thirds of white Evangelicals (67%) and mainline Protestants (65%) declare that they have no moral responsibility to accept Syrian refugees.

The World Relief people, Christianity Today, Sojourners, etc., are trying to lay heavy layers of guilt upon Christians who resist and criticize accepting refugees into America. An article in Christianity Today yelled, “Evangelical Experts Oppose Trump’s Plan to Ban Refugees.” Note that it was not lay members but experts who oppose a temporary ban on refugees. If the experts have any smarts, they will listen to their constituents. And what qualifies them as experts?

Ed Stetzer, Wheaton College professor and blogger, wrote, “First, we must continue to reject false facts.” Ed, there is no such thing as “false facts.” Building up steam like an old-time Pentecostal tent evangelist he said, “I’m pro-life because the unborn are made in the image of God, as are refugees. So, I’m pro-refugee because I am pro-life.” It is commendable that Ed is pro-life but that position does not require a principled person to be pro-refugee especially when some of the refuges will turn out to be terrorists.

But Ed disagrees. He wrote, “This is a safe program and one that evangelicals like me say, even if Trump will not, ‘Give [us] your … huddled masses, yearning to be free.’” His declaration that more refugees placed in America is a “safe program” cannot be verified.

The promoters of more refugees seem to assume that the U.S. is the only available nation for refugees; however, that dog won’t hunt. The Muslim nations should have first call on accepting refuges from Syria, Libya, Somalia, etc. Why move refugees away from their own geographical area to a nation that is totally alien to them in language, religion, customs, law, industry, etc.?

While it is dangerous to question motives of people, I would be slothful if I did not point out that many of these Evangelical pro-refugee non-profits get buckets of money from the government and other entities to plead the case of moving additional refugees to the U.S.

The U.S. government is shoveling buckets of cash into religious non-profit groups whose purpose is to deliver more immigrants into your neighborhood and provide amnesty to the gatecrashers already here. This is part of a one billion dollar annual refugee resettlement budget that is resulting in the ruin, rampage, and rape of our culture. Moreover, it will only accelerate because of more than 3 million Muslims having permanent residence and 250,000 being added each year! These facts suggest a major cultural shift has started in our nation.

Jim Wallis is the president of Sojourners (a leftwing religious/social outfit) and said that “Evangelicals finally realize that how we treat the stranger, these 11 million undocumented people, is how we treat Christ himself.” Jim must have been sleeping during his hermeneutics class in seminary because he did not get that from the Bible. Of course, Christians are to be kind, gracious, generous, and helpful; but that does not translate into being suckers, softies, and sentimentalists.

Wallis added that the leadership of the Evangelical Immigration Table (EIT), which includes the National Association of Evangelicals and the Ethics and Religious Liberty Convention of the Southern Baptist Convention, has “never been more united on an issue.” However, that is a little misleading. Of course, the feeble evangelical leaders are singing from the same page but the evangelical congregation is singing another song. The vast majority of evangelical church members want illegal immigrants to go home. A 2014 Pulse Opinion poll revealed that 78 percent ofEvangelicals surveyed believed that the biblical command to “love the stranger” means “to treat the stranger humanely while applying the rule of law.”

If the social-minded Evangelicals want to help refugees then they should not expect American tax-payers to fund their altruism. They can dig into their church coffers and into individual retirement plans to accomplish that purpose. Furthermore, these religious groups are paid by the feds for each refugee they settle in your neighborhood! Follow the money.

Not only the feds but George Soros, the international money speculator, is a 'sugar daddy' to the EIT, a leftist group of Christian leaders that never saw a socialist scheme they didn’t like. Soros’ agenda, in addition to making money, is to promote every leftwing program, especially transplanting Muslims into Europe and America. He is funding various religious non-profits to accomplish that task. National Review, reported that EIT receives a substantial portion of its funding from groups backed by George Soros. Keep following the money.

Evangelical leaders want to bring more and more Muslims to the U.S. and hand you the bill.Yet, experts tell us there may be 3 to 7 million Muslims in the U.S. and of those Muslims polled, nearly 20% agreed that use of violence to implement Sharia law is justified, and 25% declared that it is acceptable to use violence to punish those who offend Islam in their portrayal of  Mohammed!