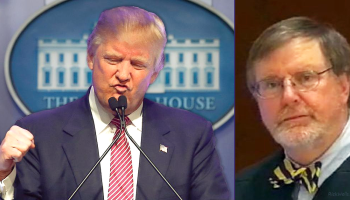 President Trump has had some skirmishes with the judiciary and much depends on the final outcome. The safety of Americans and the hallowedness and effectiveness of the U.S. Constitution could be at risk. Fact: judges are not always right.

Christ spoke about an unjust judge in Luke 18 where a widow lady sought justice from a judge who “feared not God, neither regarded man.” He was dismissive of her complaint. What did the judge have to worry about since he was a judge and she was only a widow lady? However, she kept appealing to him and sent the message that she would not cease but would continue to demand justice. Finally, the judge provided justice for her because she wearied him by her pluck, patience, and persistence.

If President Trump permits unelected judges to usurp his Constitutional authority and obligation to make decisive decisions about national security then he has surrendered his authority, thereby putting everyone in jeopardy and setting a dangerous precedent for future Presidents. Such results could have a catastrophic impact on our personal lives and our nation’s future.

Any U.S. President has one major responsibility–to keep Americans safe from enemies domestic and foreign. Every breathing, thinking person knows that Muslim terrorists have taken an oath to destroy us and set up a world caliphate. The Muslim Brotherhood’s motto is: “Allah is our objective. The prophet is our leader. The Quran is our law. Jihad is our way. Dying in the way of Allah is our highest hope.” The U.S. military will be pleased to help them accomplish their “highest hope.”

Trump, seeking to secure our borders, issued a temporary pause in immigration from seven mainly Muslim nations and his order was struck down by U.S. District Court Judge James Robart. His decision was upheld by the 9th Circuit Court of Appeals.

Judge Robart was brash, bold, and bigoted when he publically promoted Black Lives Matter rather than All Lives Matter! Therefore, his decision on the ban is no surprise.

We are told that the judges are simply interpreting the law, not making political statements - but no one really believes that except those who believe that Elvis Presley, Judge Crater, Jimmy Hoffa, and Amelia Earhart are sitting around on some Caribbean island drinking cold adult refreshments.

An attorney was quoted in the Los Angeles Times saying, “In our system of government, we should not abide the country’s most powerful executive official demeaning and disparaging the judiciary through personal attacks on a federal judge.” Evidently, the attorney is not familiar with historical confrontation between U. S. Presidents and federal judges.

Civilized people will show restraint, respect, and some reservations for all public officials; however, no public official, even a federal judge is sacrosanct. No one is exempt from being held accountable. The idea of judges being untouchable is fairly new.

President Lincoln, early in his first term, suspended the writ of habeas corpus (requiring an accused his day in court) in Maryland, thereby legally justifying his arrest of thousands of private citizens who sympathized with the south. Eighty-four-year-old Chief Justice Roger Taney (pronounced Tawney) ruled that habeas corpus could be suspended, but only Congress could do it. In other words, the President was out of order! However, if the President’s suspension of habeas corpus was not legal, then Lincoln was illegal in arresting and imprisoning at least 13,000 private citizens. The Columbia Law Review suggests that the number could have been 38,000 private citizens that Lincoln placed in military prisons!

John Merryman was a citizen of the state of Maryland and southern sympathizer who was accused of burning bridges and other destructive acts. He was arrested by military authorities and imprisoned at Fort McHenry. He was the first person arrested after Lincoln suspended the writ of habeas corpus and he was not released. Habeas corpus is protection of the meanest person from the mightiest person.

Merryman then petitioned the U.S. Supreme Court for a writ of habeas corpus and Chief Justice Taney ruled that Lincoln was wrong and ordered General Cadwallader to bring Merryman to court. The general, who worked for Lincoln, refused and the Court ordered a federal marshal to bring the accused and the general to court. Justice Taney issued a famous opinion against Lincoln’s actions and sent a copy to an angry and embarrassed Lincoln who ordered the arrest of the Chief Justice! The actual arrest did not take place but there was the threat from the President against the Chief Justice of the Supreme Court!

While Lincoln was obviously wrong to attack federal judges, the incident supports the fact that judges are not unchallengeable, unaccountable, and unassailable. That’s still true today.

Moreover, William Matthew Merrick of the United States Circuit Court for the District of Columbia was placed under house arrest because he did not support Lincoln’s suspension of habeas corpus.

But in the present case, President Trump is right, not wrong and he must prevail even with the U.S. Supreme Court; after all, they are only human and susceptible to ego, prejudice, fear, etc. It is past time for Congress to set some guidelines as to what the court will hear. Article three, section two of the Constitution mandates that the Court's appellate jurisdiction is given "with such exceptions, and under such regulations as the Congress shall make." So, congress should inform the court that they will have authority in disputes between the states, disagreements between a state and an individual, treaties, etc. but some issues are off limits.

President Trump must prevail in this dispute and he should keep in mind Christ’s parable of the unjust judge and not give up–pluck, patience, and persistence will prevail.