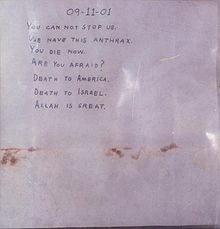 Bill Gates was recently quoted as saying that bioterrorism could kill more people than nuclear war, but that Western governments are not ready to deal with it. The situation may be worse than he thinks. What stories about his remarks at the Munich Security Conference did not explain is that the FBI has still failed to resolve the question of who carried out the post-9/11 anthrax attacks on America.

Some of the evidence points to al-Qaeda, and there are reports that other Islamic terrorist groups, such as ISIS, are now developing biological weapons.

For his part, President Donald Trump is currently engaged in a feud with the FBI over “illegal leaks” that he wants to have investigated and stopped.

Trump has a right to be concerned, even alarmed. And he certainly has a right to know the full extent of the corruption that ran rampant in the Bureau during its investigation of the post-9/11 anthrax attacks, known as Amerithrax. The gross mishandling of the case serves as an example of how not to conduct a national security investigation involving weapons of mass destruction. It is also a warning that something similar—or perhaps more catastrophic—could happen again unless changes are made at the FBI involving monitoring the activities of jihadist groups on American soil.

We noted at the time that the anthrax letters, which were mailed to American media organizations and two senators, featured the phrases “Death to America,” “Death to Israel,” and “Allah is God.” These were indications that an Islamic extremist had written them. But the FBI dismissed these obvious leads as a diversion intended to falsely blame radical Islam and focus attention away from the real perpetrator, supposedly a right-winger with a military background.

In the end, the FBI says “The Amerithrax Task Force—which consisted of roughly 25 to 30 full-time investigators from the FBI, the U.S. Postal Inspection Service, and other law enforcement agencies, as well as federal prosecutors from the District of Columbia and the Justice Department’s Counterterrorism Section—expended hundreds of thousands of investigator work hours on this case. Their efforts involved more than 10,000 witness interviews on six different continents, the execution of 80 searches, and the recovery of more than 6,000 items of potential evidence during the course of the investigation. The case involved the issuance of more than 5,750 grand jury subpoenas and the collection of 5,730 environmental samples from 60 site locations. In addition, new scientific methods were developed that ultimately led to the break in the case—methods that could have a far-reaching impact on future investigations.”

Still, independent experts believe the FBI did not solve the case.

While experts believe that al-Qaeda was behind the attacks, a story about Bill Gates’ sensational warning about bioterrorism in the British Guardian reported that, “US and UK intelligence agencies have said that Islamic State has been trying to develop biological weapons at its bases in Syria and Iraq.” The publication said, however, that these intelligence agencies “have played down the threat, saying that the terrorists would need people with the necessary skills, good laboratories and a relatively calm environment free from the confusion and chaos of conflict zones.”

Playing down the threat of jihadist bioterrorism is something that U.S. intelligence agencies, led by the FBI, did in the case of the anthrax attacks. In 2010, the FBI officially blamed those attacks, which killed five Americans, on a dead man, U.S. Army scientist Bruce Ivins.

The independent investigators, including historian Kenneth J. Dillon, a former Foreign Service officer and intelligence analyst, and attorney Ross Getman, an expert on al-Qaeda’s biowarfare program, are asking President Trump and Vice President Mike Pence to reopen the anthrax mailings investigation. This could lead, Dillon argues, to exonerating an innocent man, identifying the real al-Qaeda perpetrator, and getting to the bottom of what went wrong in America’s premier federal law enforcement agency.

In 2002, then-Rep. Pence wrote a letter asking why international links weren’t being probed in the anthrax mailings.

From the start of the FBI’s inquiry, the Bureau seemed determined to eliminate al-Qaeda as a source of the attacks. Former government scientist Dr. Stephen Hatfill’s career was destroyed by the FBI as they sought to frame him. Eventually, the Department of Justice paid Hatfill a multi-million dollar settlement in recognition of the fact that they had persecuted an innocent man.

At the time, Hatfill spoke to an Accuracy in Media conference, focusing on how American reporters were assisting the FBI campaign against him. For example, Pulitzer Prize-winning liberal columnist Nicholas Kristof of The New York Times wrote five columns and thousands of words urging FBI scrutiny of the scientist.

After paying Hatfill a financial settlement, the FBI picked on another alleged villain, Dr. Bruce Ivins, and hounded him until he committed suicide. Ivins had worked at Fort Detrick in Frederick, Maryland.

Federal authorities conceded that al-Qaeda planned that its next wave of terrorism after the 9/11 attacks was to be chemical or biological attacks. Medical reports suggested that two of the 9/11 hijackers may have come into contact with anthrax. Yet the FBI consistently diverted attention away from al-Qaeda.

There was a chance to review the case in 2010, when bipartisan congressional support was growing for an examination of the FBI’s gross mishandling of the post-9/11 anthrax attacks. But President Barack Obama’s representatives told Congress that the FBI’s conduct shouldn’t be scrutinized.

Historian Dillon notes that Richard Lambert, who headed the FBI’s anthrax investigation from 2002 to 2006, filed suit in the U.S. District Court for Eastern Tennessee against Attorney General Eric Holder et al. for retaliating against him for his whistleblowing about the FBI’s handling of the case. In his lawsuit, he criticizes the FBI’s efforts to railroad the prosecution of Ivins in the face of daunting exculpatory evidence.

When we asked him for an interview, Lambert declined, saying “All of the information the Justice Department is withholding from the American people is either restricted from disclosure by the Privacy Act, governed by non-disclosure, non-disparagement clauses in other settlement agreements, or classified as national security information. The only avenue for remedying the government's wealth of material omissions in this case would be through a congressional inquiry.  Although bills have been introduced in the past to establish such an inquiry committee, they never became law.”

The independent investigators believe that Freedom of Information Act requests that are now being stonewalled by the FBI could lead to major breakthroughs and the clearing of Ivins if the FBI is ordered by the Trump administration to cooperate.

In his remarks on possible bioterrorism, Bill Gates said, “Imagine if I told you that somewhere in this world, there’s a weapon that exists—or that could emerge—capable of killing tens of thousands, or millions, of people, bringing economies to a standstill, and throwing nations into chaos. You would say that we need to do everything possible to gather intelligence and develop effective countermeasures to reduce the threat.”

Such a weapon could be in the hands of radical Islamic extremists. But if the FBI still hasn’t solved the matter of the post-9/11 anthrax attacks, what assurance do we have that the Bureau could prevent or solve the next devastating wave of biological attacks?

President Trump and Vice President Pence have every reason in the world to be concerned about what is happening at the FBI. They could, and should, reopen the anthrax investigation. It would be an opportunity to expose and remove the corruption that may remain in the Bureau and makes us vulnerable to another biological terrorist attack.