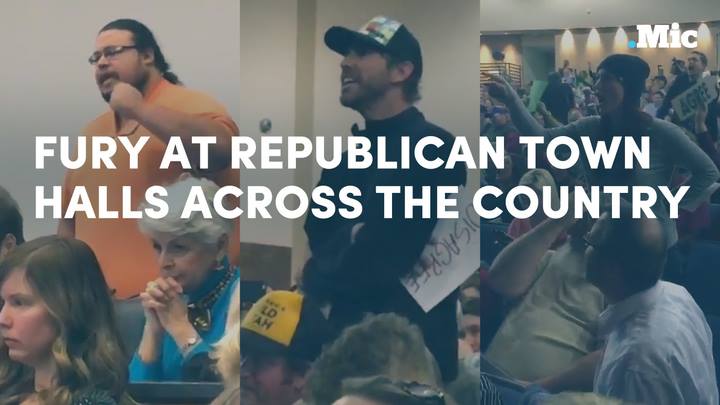 During recesses, senators and congressmen commonly have open meetings with their constituents. Such events are a way for elected officials to show their willingness to hear from voters on a myriad of topics. Since colonial times, these forums have been called “town halls”; lately, however, they have been more like “Town Brawls”.

Historically, admission to town halls has been open to all. They serve as opportunities for those with opposing views to sit down with politicians and have a civil conversation. Today’s Republican Town Brawls are nothing like that; they have been reduced to a turkey shoot for hyperventilating Leftists.

The modus operandi is simple: Democrat Brawlers get there early so they occupy all the seats, and start their turn to speak with “I’m not a paid protester”. They make sure to ask questions in the most aggressive way possible, and never forget to boo a conservative response to any question. For extra credit, they throw rocks at the pastor saying the opening prayer and spit on the veteran who leads the pledge of allegiance.

There’s a lot of talk about paid protesters, but I have to believe that the majority of these people are there on their own dime. Let’s face it, there are millions of shell-shocked ex-Clinton supporters that would jump at the opportunity to spew some venom at the nearest Republican. You don’t have to pay them; they might even pay you.

The purpose of the Town Brawl is to make it appear as if elected Republicans don’t have the support of their constituents. Even in places where this idea is clearly ridiculous, like Rep. Jason Chafetz’s Utah district (won with 74% of the vote), there are enough liberals to fill a venue and make a lot of noise.

You might say, well, the people at Town Brawls are just a minority. Let’s just ignore them. Bad idea. Here’s some reasons why:

1)     The optics of Town Brawls are terrible. The aggrieved attendees think like Hollywood celebrities, but they look just like regular folk. On television, it’s easy for those on the fence with regards to President Trump’s agenda to identify with some of the less-obviously-insane protesters.

2)     Town Brawlers aim to make it appear that they are the (not-so-silent) majority. The perception they’re pushing is that everyone in the area hates their representative, while the opposite is usually true.

3)     Republican officials are human beings, and town brawls, while survivable, must be draining. A number of politicians have publicly walked back their support of Trump policies in the face of heated invective from the mob.

4)     Worse, some Republican members of Congress may come to actively resent the president for placing them in this position. What’s the effect of having to defend him in front of an angry crowd? Find out by hiring 20 Democrats to yell at you for an hour straight about your mean-spirited, regressive, racist core beliefs. Think you’ll feel more kindly towards Donald Trump afterwards?

5)     Every Republican Town Hall that becomes a Town Brawl is given the maximum amount of exposure by reporters, who paint angry Leftists as the equivalent of the French people storming the Bastille. In other words, freedom fighters attacking uncaring elitists.

6)     Town Halls are ideal targets for groups like MoveOn.org, Indivisible, and others who recruit aggressive ideologues for the front line in the battle to derail President Trump and his team.  Town Brawls that successfully disrupt an actual conversation about the issues encourage more to join the crusade.

7)     For anti-Trumpers, it’s easier to just appear at scheduled events that devolve into Town Brawls than to organize their own protest. Citizens have a right to be there, so there’s less chance of being arrested. Plus, think about all the coverage available to record all the righteous indignation.

The answer to ending Republican Town Brawls is simple: Don’t hold them in person. Conservative politicians: No one thinks you’re a hero for stoically taking a public beating. Certainly, an elected official should be aware of the concerns of his constituents. But why risk possible physical injury and certain political injury by aiding and abetting protesters?

Some Republicans, like Senator Marco Rubio, have wised up and won’t hold a town hall while Trump Derangement Syndrome is at critical mass. The refusal of Rubio and others to place a target on their forehead has led the Left to hold their own Town Brawls in effigy; instead of their preferred victim, they use a suit (I’m not kidding; an actual suit) or an empty chair to yell at and ask questions. I haven’t seen one of these events, but I imagine that they would accurately reflect how unhinged these folks really are.

Perhaps one day liberals and conservatives might once again have a real dialogue on the issues that face our country. Until then, I guess we’d better get used to asking politicians questions on Facebook.