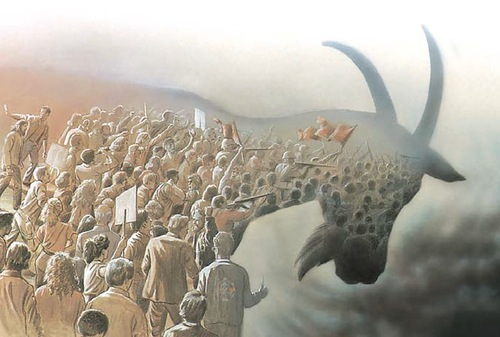 The famous English pastor Charles Spurgeon said, “A time will come when instead of shepherds feeding the sheep, the church will have clowns entertaining the goats.” We are there right now. Our pulpits are full of ordained clowns who mock those men of God who are faithful to their calling.

Recently the famous Calvary Baptist Church (formally a Southern Baptist Church) in Washington, D.C. shattered the glass ceiling by calling as their pastors, Sally Sarratt and Maria Swearingen to occupy their pulpit! Of course, the search committee made sure that the “couple” was “married.” Horrors, they couldn’t have unmarried lesbians as pastors!

“We look for the best people in the world and that’s who they were,” church spokeswoman Carol Blythe told the Religion News Service. “We’re very excited.” The church was impressed by their “deep faith and commitment to being part of a gospel community.”

I wonder what the “reverends” will do when they preach from the passages in Leviticus and Romans that warn against perversion. Probably they will do what they did with the passage dealing with requirements for pastors.

Heretics and apostates change their theology to justify their wicked lifestyle as did the bisexual Dr. Debra Haffner, ordained minister and ardent abortionist. She teaches that the Bible supports bisexuality “proving” her case with the lives of David and Jonathan and Ruth and Naomi.

EastLake Community Church outside Seattle is quietly coming out as one of the first evangelical megachurches in the country to support full inclusion and affirmation of LGBTQ people. Pastor Ryan Meeks, 36, is on the front wave of a new choice. “I refuse to go to a church where my friends who are gay are excluded from Communion or a marriage covenant or the beauty of Christian community,”  Wow, isn’t Ryan a highly principled parson!

Lutheran pastor Dr. Ralph Underwager was asked, “Is choosing pedophilia for you a responsible choice for the individual?” His answer: “Certainly it is responsible….Pedophiles can boldly and courageously affirm what they choose. They can say what they want is to find the best way to love. I am also a theologian and as a theologian, I believe it is God’s will that there be closeness and intimacy, unity of the flesh, between people….” He went on to add, “Pedophiles need to become more positive and make the claim that pedophilia is an acceptable expression of God’s will for love and unity among human beings.”

Someone hand me a barf bag. It is incredible that any Lutheran Church or council would ordain such a shameless, senseless, and sinful person.

Chris Korda (female) started the Church of Euthanasia in Massachusetts and it has only one commandment, “Thou Shalt Not Procreate.” Its most popular slogan is "Save the Planet, Kill Yourself" and other slogans include "Six Billion Humans Can't Be Wrong," and "Eat a Queer Fetus for Jesus.” Its four main pillars are suicide, abortion, cannibalism (of the already dead), and sodomy or any kind of sex that does not procreate! Sodomy is optional but highly recommended. The “church” was formed as a 501 (c) 3 organization, and donations to it are tax-deductible. Isn’t this a great nation!

Katie and Robert attend the White Tail Chapel every Sunday - a church for nudists! They were married at White Tail Chapel and say the church has given them a sense of Christian community with “none of the pretense of a traditional church.” Well, the church choir saves money on choir robes; however, the pastor doesn’t preach the naked truth.

"I'm a pastor, but at the end of the day, I'm a man," declared music minister Dietrich Haddon who shares raw details of relationship failures and fathering a baby out of wedlock. Sure, Dietrich.

Research expert George Barna was on American Family Radio's Today's Issues broadcast to discuss what he discovered about pastors. "What we're finding is that when we ask them about all the key issues of the day, [90 percent of them are] telling us, 'Yes, the Bible speaks to every one of these issues.' Then we ask them, 'Well, are you teaching your people what the Bible says about those issues?'—and the numbers drop ... to less than 10 percent of pastors who say they will speak to it." Such pastors should run, not walk, to resign from their churches.

Consequently, the sheep have fled those churches and have been replaced by goats entertained by clowns.