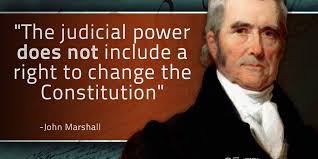 On Wednesday (3/15/17), at a rally in Nashville, President Trump proclaimed that, “A judge has just blocked our Executive Order on travel and refugees coming into our country from certain countries….We’re going to fight this terrible ruling. We’re going to take our case as far as it needs to go including all the way up to the Supreme Court. The danger is clear – the law is clear – the need for my Executive order is clear…”
Trump has now been blocked multiple times by lower court judges.
So what does he or anyone intend to do about it? It appears he intends to fight this all way to the high court – or should I say, the black-robed legislators. And then what?
This is how far we’ve strayed from the Constitution and the design of the federal judicial branch’s authority. All on the right are wailing about the courts clearly overstepping their bounds, but from what I’ve heard and seen thus far, no one has offered a solution.
On his Wednesday evening radio program, Mark Levin weighed in stating that, “we have, ladies and gentlemen, rogue federal district judges now – we have rogue courts. We have judicial anarchy taking place…where judges are seizing plenary authority from the President of the United States…to determine the nature of our immigration in this country.”
This latest judge concluded that despite the changes made in the second Executive order, the new order still failed to pass legal muster. Levin says that in fact “they didn’t fail to pass any legal muster. They didn’t fail to conform with the Constitution of the United States – you have,” referring to the judge. Mark then added that, “this judicial tyranny has gotta end! There is nothing illegal – nothing unconstitutional, about this order.”
Mark says that “we have to admit, if we’re going to turn this country around - that the progressives have won – they’ve taken over the courts…”
Everything Mark says is absolute fact. I know this to be, because other than possibly Dr. Larry Arnn at Hillsdale College, there is no one I trust more regarding the Constitution. Yet for all the complaining and stating of fact, I don’t hear a solution.
Levin stated that these lower court judges “seized plenary authority from the President of the United States.” That’s a serious charge. In United States constitutional law, plenary power is a power that has been granted to a body or person, in absolute terms, with no review of, or limitations upon, the exercise of that power.
In other words, the “rogue” judges have stolen power which belongs to the President and the legislature. Should there not be a consequence for this illegal act? Seems to me there should, but no one on the right has even ventured down this road.
Mark then spoke with Ben Shapiro – another very smart guy on the right. Levin asks Shapiro: “What do we do about it?” Shapiro says “you’ll see this go on until it gets to the Supreme Court level.” He claims that “after Gorsuch is confirmed the Supreme Court will rule the right way – although you never know.”
Translation: We run it through the same judicial system we’ve been condemning for how long? And then we just live with a potentially flawed “final decision” regarding something they evidently have no right to even be involved with – because they’ve stolen the authority in the first place? That makes sense.
I’m no scholar, but I can listen and read. Every supposed conservative constitutional authority agrees that the courts have severely overstepped their bounds, yet not a single one can give a suggestion as to what to do about it.
I use a lot of football analogies – so here’s another.
The referees, back and line judges in football are considered the on-field “judges” of the game. The NFL rulebook spells out what their responsibilities are and what authority they have. Yet during one particular hypothetical game, a line judge, who would equate to a lower court judge, decides that the game is just taking too long. He calls up to the clock manager and tells him to change the time to read one minute left in the game, when it is presently still in the third quarter.
This is obviously not his job and he has no authority to make this ruling, but he does so nonetheless. Everyone in the stands yells down that he can’t do that – that he has overstepped his bounds – he has clearly seized authority to end the game. Yet beyond complaining, no one does anything. They all just file out of the stadium. The other refs, coaches and players do the same – all the while appearing exasperated.
This of course is completely absurd. But is it any more absurd than what we are allowing to happen in the courts? As long as the President and the Legislative branch bow to the courts, this will continue to happen.
If this is truly a breach of the Constitution, it would seem to me that the aggrieved person (President Trump) and/or persons (Congress) could simply announce that the courts have no authority to rule on this matter, as they have done so by illegally seizing another branch’s Constitutional authority, and institute the order in full.
Some would say, and I can hear it now - that this would create a Constitutional crisis. How ridiculous! What we have now is a Constitutional crisis! Slapping down the federal judiciary by reminding them of their specific Constitutional authority and limitations would finally end the crisis we’ve been enduring for decades.
Copyright ©2017
Read more by Brent Smith
Tweet