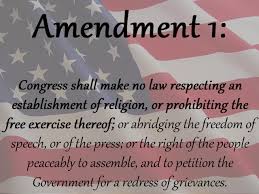 President Donald Trump has pledged to sign the First Amendment Defense Act (FADA) that prohibits the federal government from taking action against individuals who oppose same-sex marriage, although “individuals” is defined broadly in the bill to include for-profit businesses. National Review reported, “This means that the legislation would protect schools, private businesses, and individuals from being stripped of nonprofit tax-exempt status, grants, contracts, or accreditation, as the result of holding particular religious beliefs about the nature of marriage.”

Additionally, it would negate a recent bill signed by Governor Jerry Brown of California who jumped with hobnail boots upon the rights of all Christian colleges in that state. That oppressive law now includes California’s Christian colleges and universities and forces all schools to report to the state officials four times a year on every expulsion and suspension of a student, and the reasons for the discipline. That is none of the government’s business and private college presidents should clearly tell authorities that fact and say: “We will not obey that law. Come and get us.” Only a weak, wavering, wobbly weasel of a college president would obey such a law.

Trump must keep his promise made at the National Prayer Breakfast on Feb. 2 when he promised, “My administration will do everything in its power to defend and protect religious liberty.” Evangelical Christians put him in office and we can take him out. We don’t want a return of the government seeking to control Christians in the colleges, churches, or culture.

I don’t want any heel on my neck, not Trump’s, nor a governor’s, nor a local dictocrat’s heel. If these oppressive laws are not overturned, then we will see a return to 17th century England when preachers defanged King George II.

John Bunyan was one of the first to feel the heat of tyranny for his biblical convictions.

The Bedford church and similar churches were called Independents since they did not have any ties to the Church of England, and I freely and gladly identify with them. Being independent was illegal since everyone had to be a member of the Church of England and regularly attend services. Or severe penalties were imposed.

It was safer to be a desperado in England than it was to be a dissident!

Bunyan moved to Bedford in 1644 (when Charles I was king) to be closer to the dissident church. When his wife died in 1658, John was left with blind Mary, Elizabeth, John, and Thomas. Convinced that he would be put in prison, he asked a teenage girl in the church to marry him and care for his children. He and Elizabeth were married in 1659 and they had two more children. They learned to love each other as they got older, proof that often you may not always marry the one you love but you can love the one you marry. Elizabeth became an aggressive advocate, approaching various judges seeking John’s release.

John was taken to court and warned by the judge that the charges against him were serious: John had never attended services in a Church of England as the law required, and was known to have preached in unapproved churches. Bunyan told the judge, "The depositions speak the truth. I have never attended services in the Church of England, nor do I intend ever to do so. Secondly, it is no secret that I preach the Word of God whenever, wherever, and to whomever He pleases to grant me opportunity to do so.”

John took a deep breath and continued, “I have no choice but to acknowledge my awareness of the law which I am accused of transgressing. Likewise, I have no choice but to confess my guilt in my transgression of it. As true as these things are, I must affirm that I neither regret breaking the law, nor repent of having broken it. Further, I must warn you that I have no intention in the future of conforming to it.” John had a backbone of steel and did not wear lace on his drawers, as do most preachers today.

Judge Wingate said, “Charles II has made provision for dissenting preachers to hold some limited meetings. All that is required is that such ministers procure licenses [permission] authorizing them to convene these gatherings." But, John knew that he did not need permission from anyone to preach the Gospel.

John replied, “I must repeat that it is God who constrains me to preach, and no man or company of men may grant or deny me leave [permission] to preach. These licenses of which you speak, M'lord, are symbols not of a right, but of a privilege. Implied therein is the principle that a mere man can extend or withhold them according to his whim. I speak not of privileges, but of rights. Privileges (licenses) granted by men may be denied by men. Rights are granted by God, and can be legitimately denied by no man. I must therefore, refuse to comply."

The frustrated judge sentenced John to prison saying, “I strongly suspect that we have heard the last we shall ever hear from Mr. John Bunyan.” Somewhat of an understatement.

In November of 1660, John was taken to the county jail on Silver Street in Bedford where he was imprisoned for 12 years except for a few weeks in 1666. His home on High Street was a short walk away. In March 1675, he was imprisoned for six months in the Bedford town jail on the stone bridge over the Ouse River.

The major storm of church-state conflict was building on the horizon that would smash a staggering nation and leave behind thousands of Christians without incomes, homes, and reputations–all because a tyrannical king insisted on controlling preachers with a government license. A license always means control.

Modern Americans, including most religious leaders, are totally ignorant of the danger of a government license.

It was safer to be a desperado than it was to be a dissident in England; and America and Canada are on the same path. Trump, keep your word, and protect the people who elected you!