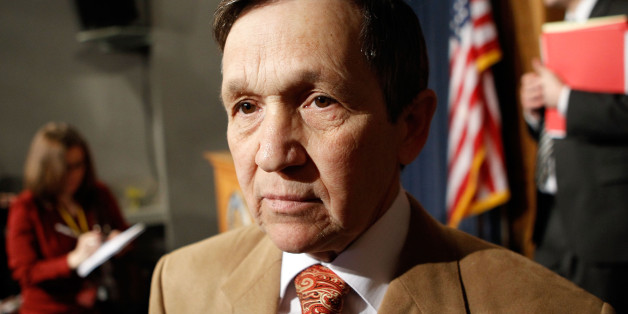 The Epoch Times Newspaper is currently running an editorial series called “The Dead End of Communism” that includes a detailed discussion of the diabolical, even Satanic, roots of Karl Marx, the father of communism. Looking at his writings in detail, the authors document how his goal was “to enact a sort of vengeance against heaven.” Contrary to his “progressive” profile, Marx hated humanity and life on earth. His appeal was that he promised a heaven on earth. But it turned out to be hell for those living under it.

Communism has killed more than 100 million people, and millions more are at risk of death. The people of South Korea and other countries are constantly in the crosshairs of Communist North Korea’s nuclear weapons program. The Communist ruler, Kim Jong-un, has even threatened America with a nuclear attack.

The North Korean nuclear weapons program was assisted by President Bill Clinton’s administration, in the name of stopping it, and the Obama administration did little to contain it. It’s likely that former President Barack Obama informed President Donald Trump about this growing problem, and that this helps explain why Trump has been so concerned, even preoccupied, with the North Korean nuclear threat since he took office.

Of course, the North Korean regime could not survive without the assistance of its Communist neighbor, China. So Communism is not itself dead. It is very much alive and is a real threat. Trump understands this but he continues to be assaulted by the media and their Democratic Party allies about his so-called Russian connection - for which there is no evidence.

A serious examination of the real Russia problem can be found in The Epoch Times series marking the 100th anniversary of the Russian Revolution. President Trump recognized that Russia has not changed significantly from the old Soviet days when he authorized a U.S. military strike on Russian client state Syria in response to its alleged chemical weapons attack on innocent civilians. Russia’s relationship with Syria and Iran represents the “Red Jihad” that has existed since the days of Lenin, when the founder of the Soviet state urged the “oppressed” Muslims to join in a global campaign against the West.

Meanwhile, Communism is very much alive and doing well in Latin America. The Communist rulers of Venezuela are in the news for totally mismanaging their once-healthy economy and persecuting their own citizens. And Washington Times investigative journalist Martin Arostegui writes about how Colombia’s FARC Communist guerrillas are still in the business of dealing drugs and spreading terrorism.

It was supposed to be a “peace process,” but the serious flaws in the agreement made between the terrorists and the government will have to be fixed if Colombia is going to survive as a free and independent country. “Three months into the agreement’s implementation, the guerrillas have surrendered what critics say is a token number of weapons while the production of coca has skyrocketed from 63,000 hectares in 2013 to 188,000 last year,” writes Arostegui. “Analysts attribute the rise to concessions that the FARC has obtained through the peace process.”

Like the mess in Syria, Obama’s fingerprints are all over this. As the author notes, “President Obama backed the peace process by trying to delist the FARC as a terrorist group to facilitate an agreement. He earmarked $450 million for fiscal 2017 to underwrite the deal, and his secretary of state, John F. Kerry, publicly met with FARC leaders.”

It looks like “peace” in Colombia is similar to the “100 percent” elimination of chemical weapons in Syria.

As President Trump attempts to rally the nation in the face of the North Korean threat, we can see how communism is also very much alive on the streets of America. Communist groups have organized a tour covering nine U.S. cities, from April 4 through the 16th, to mobilize against the deployment of the U.S. Terminal High Altitude Area Defense (THAAD) missile system in South Korea. THAAD is designed to deter a North Korean nuclear attack. It’s the one thing Obama set in motion to help defend South Korea.

The main sponsor of the anti-THAAD tour is the Party for Socialism and Liberation (PSL), a self-described “revolutionary Marxist party in the United States,” and its front, Act Now to Stop War & End Racism.

Individual endorsers of this campaign include Marxist academic Noam Chomsky and former Democratic Congressman Dennis Kucinich, who is now a Fox News contributor.

Remember Kucinich? His Fox News bio notes that he “conducted an exclusive interview with Syrian President Bashar al-Assad to discuss the allegations of the use of chemical weapons alongside FNC’s Senior Foreign Affairs Correspondent Greg Palkot.” That was aired on Special Report with Bret Baier back in 2013. After the recent allegations of a chemical attack, Kucinich was back on Fox News saying he didn’t think Assad was behind it.

It’s fascinating that Kucinich is now a leader of the campaign against defending South Korea from a Communist attack.

His “message of solidarity to the Korean people in the struggle to oppose the THAAD missile ‘defense’ system” reads like something written by a North Korean propagandist. “THAAD is not a technology for peace,” Kucinich says. “It is for war.”

Kucinich says, “It could be argued that the installation of such a system, whether it works or not, is a provocation (‘first the shield, then the sword’). Added to the joint U.S./South Korean military exercises, it places an additional burden of tension to already strained relations with the North. I would instead urge greater reliance upon the wonderful capacity of the Korean people to engage in diplomacy with the brothers and sisters in the North, to avert conflict.”

It is signed by Kucinich with the biographical information, “Member of the United States Congress, 1997-2013. Democratic Candidate for President 2004 and 2008.”

It certainly looks like a major figure in the Democratic Party is acting like a foreign agent for the North Korean regime. There seems to be more evidence of his work on behalf of Kim Jung-un than there is for Trump being a Russian agent.

Is there any likelihood that his fellow Democrats will raise any alarm by this kind of behavior? Will they call for hearings and investigations?

Perhaps his employer Fox News should look into it.
Copyright ©2017
Read more by Cliff Kincaid
Tweet