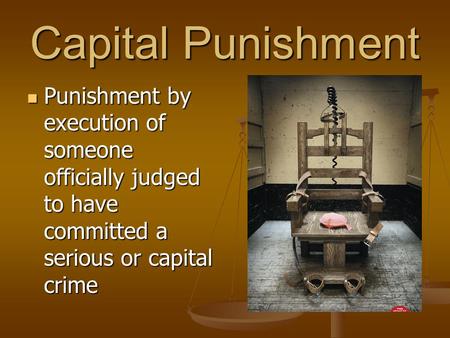 Death penalty opponents have few arguments for their position; so, usually in desperation they whimper, “But more poor people are executed than wealthy people.” The hearers are supposed to fold their tents and go home because of the power of the argument. Not in the real world.

I have heard that argument many times on talk shows. Death penalty opponents suggest that in fairness, society should not execute people, especially poor people, since no rich people have been executed in America with the exception of one mobster in 1944 and a drug kingpin in 2001! I tell them that more poor people are executed for murder because they commit more murders! After all, there are more poor people than rich people. It is also a fact that rich people don't usually have the motives to kill as often. They have money, friends, and possessions so they usually only kill during very emotional times–hatred, jealousy, or revenge.

Of course, when a rich person kills another person, he or she should get the death penalty as poor people do. Yes, rich people can afford better lawyers than poor people, but that is a fact of life that must be accepted.

We are also told that more poor blacks are executed than whites; however, the U.S. Supreme Court ruled that the death penalty does not discriminate against blacks. Furthermore, a Stanford University study revealed that killers of whites (whether the killers are black or white) are more likely to get sentenced to death than killers of black people (whether the killers are black or white). But blacks who kill whites were less likely to receive death sentences than were whites who killed whites. Doesn't sound like discrimination to me unless maybe it is reverse discrimination!

It is also interesting that women commit about 13% of the murders in the U.S. yet less than 1% are executed. Maybe we can expect the screaming ladies of NOW to do something about this glaring inequality and injustice. Unless you look good in blue, don't hold your breath until the feminists carry signs demanding, "Execute more women," "Equality on Death Row," or "Put more women on death row."

We must demand that all people be treated like all other people whatever their color, gender, or social status. The answer is to mete out punishment fairly, not drop it altogether. A study by the National Center for Policy Analysis (NCPA) found that in 2005, “there were 16,692 cases of murder and nonnegligent (sic) manslaughter nationally; there were 60 executions.” That is not justice.

"But if we execute all the killers (2,943) on death row in the various states, that would be a bloodbath," say the nonthinkers. However, we have a bloodbath going on every day? There’s a bloodbath in Chicago, Baltimore, and St. Louis; and almost all the victims are poor and black.

If there is going to be a bloodbath, let it be the blood of convicted killers–rich or poor. If the 50 states were to execute all 2,943 killers tomorrow morning at 6:00, it would sure send a message to other potential killers, wouldn't it?  Of the 2,943 convicted killers on death row, about half are white, half are black, and 2,888 are male, and 55 are female.

Authorities must also get the message that felons should be in prison, not on the streets. Streets are for people who obey and respect the law. Rebels, even poor rebels, belong in prison. But at least 30% of those arrested for violent crimes were on probation, parole, or on bail when the crimes were committed. We must send officials a message: keep violent criminals in prison until their sentences are served!

The U.S. Justice Department's annual report revealed that two-thirds of those on death row had prior felony convictions and a full 10% of those killers had murdered before! That 10% should not have been permitted to prey on innocent people because they should have been executed after their first murder. You've heard of three strikes and you're out, but it should be one strike and you're dead. No second chance for killers–poor or rich.

Scores of people have told me on talk shows that an innocent person may be executed so we should do away with the death penalty, especially since most of them are poor. Well, since we live in an imperfect world, I'll concede the possibility that an innocent person may be executed. But without the death penalty, there will be the certainty of many more innocent killings.

I have also heard the old canard that it is better to let a hundred guilty men go free than to execute one innocent man. Now, I'm not advocating executing innocent people, and the thought is horrifying, but it is an inane statement. We are comparing one innocent man to hundreds of other innocent people who would be killed if the hundred killers went free. Those on the other side of this issue don’t think.

Often the opponents of the death penalty affirm that many poor innocent people have been executed who could not afford top legal advice, so executions are unjust. As usual, they are wrong. They usually quote the Stanford Law Review to prove their contention, but they didn't read the complete article! Professors Bedan and Radelet looked at 2,300 capital crime convictions since 1900 and said they thought 25 men were wrongly executed. The professors "believed" the men were innocent, but they did not prove their case. They even listed notorious cases such as Sacco and Vanzetti, Hauptmann, the Rosenbergs, etc., all cold-blooded killers and traitors whose cases were reviewed by various courts. The professors ended up admitting, "...in none of the cases...can we point to any state action indicating the belief that the person executed was innocent." Evidently, my critics never read the full article.

Yes, it could happen. It may have already happened, but it is unlikely with all the restrictions placed on the police, the emphasis on the rights of the accused, the jury trial, numerous appeals, DNA, and usually a long period on death row. Add to that the fact that most governors hand out pardons like campaign literature and are gutless "crybabies" who are super-sensitive to the bellowing and whining from leftist groups who have never seen a guilty killer they didn't like.

Justice requires that no one should receive special treatment because he is poor or rich, sick or well, young or old, famous or infamous, handsome or ugly, or popular or hated.