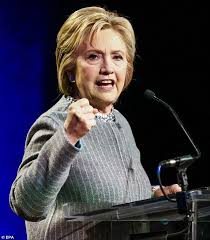 Hillary Clinton recently interrupted a tour of a pant-suit factory to speak about her election loss to Donald Trump. She said that she “absolutely” takes responsibility for the loss, but that depends on what the definition of “absolutely” is. Apparently in the Clinton world it means, “sorta kinda.”

The ungrateful former Secretary of State passed on an opportunity to thank now-former FBI Director James Comey for not referring her investigation for prosecution, where she would have faced over 2,000 felony counts for mishandling classified information.

She missed a couple of reasons for her loss:  Barack Hussein Obama and climate change.

So how did climate change cause Hillary to lose? You have to ask? Does it matter? Climate change.

How did Barack Hussein Obama cause Hillary to lose? That’s a little tougher to explain. BHO was an historic president. No president in history had ever given an enemy a pallet full of cash. Billy Bob Clinton sent nuclear material to North Korea and dual-use technology to Communist China, but even he had the good sense to sell it. China did not get silent submarine technology for free, by golly! Billy Bob made them pay for the ability to someday secretly park nuclear-armed subs off our coasts.

But back to BHO. Obama was a historic president in another sense:  He stopped the oceans from rising. Remember that? Had he not been elected, right now, Manhattan would be underwater. And I mean Manhattan, Kansas. Most of the US would now be uninhabitable because of...climate change, and 250 million people would have had to move to Colorado and Utah to live in the mountains, to avoid the rising waters. The rest would have drowned, of course, as they waited for the government to provide free buses for them.

There would be 100,000 people in all of Utah - all conservatives - with everyone else moving to Colorado, clogging up I-70 when headed out for their marijuana runs, and all 250 million people in the Mountain High state would’ve voted for Hillary. Win Colorado and win 532 electoral votes. Boom! Hillary’s president. But no, BHO had to stop the oceans from rising. His fault.

It’s important to note the confusion back in those heady days when BHO promised to rescue us all. What was mistaken for rising sea levels was actually just the result of Michael Moore and Rosie O’Donnell venturing into the water while on vacation together. (Note to those triggered by fat people jokes:  Come on, it’s Moore and O’Donnell; you live by the spoon and you die by the spoon.)

If you’re ever on a scavenger hunt and you see “uranium” on the list, know that you have 20% less of a chance of finding any because Hillary’s State Department sold it to the Russians, then the Russians made a donation to the Clinton Foundation. Hillary did not talk about her Russia connection in her interview. That could have been enlightening. Or edited out.

Hillary’s first 100 days as non-president have not gone well. She’s babbling about “the resistance,” as though aliens or an invading army occupy the land, unaware that a presidential candidate once proclaimed that it is “unpatriotic” to question the results of an American election. Some liberals are already tired of her. Her daughter keeps embarrassing herself on Twitter, reminding everyone that she is biologically part of Hillary.

People got tired of her lies, from her ridiculous explanations of her federal crimes surrounding her handling of classified information to her Weekend at Bernie’s fainting - or seizure - incident caught on camera. Yeah, people drag me around like I’m dead when I dehydrate. Of course, her handlers got confused because they thought “Weekend at Bernie’s” meant they were going to have to ride around in Bernie Sanders’ cramped little Subaru and listen to him talk about making a vow of poverty. The thought of giving up all that Wall Street cash was too frightening for the Hillary Crew.

When liberals are tired of Hillary’s lies, you know it’s time for Hillary Clinton to retreat back into the woods or find another pant-suit factory to tour. She’s not a “has been,” she’s a “never was.” She got a job in a large Arkansas law firm because her husband was the state’s Attorney General; she was elevated to law partner when her husband was elevated to Governor. She became the Senator from New York because she was First Lady, and she was chosen as Secretary of State because she was a failed presidential candidate, which she became because she was a Senator without accomplishments. And now she’s a twice-failed presidential candidate who should be facing felony charges. Yes, it’s time for Hillary to retreat. Forever.

This is exactly what climate change causes.