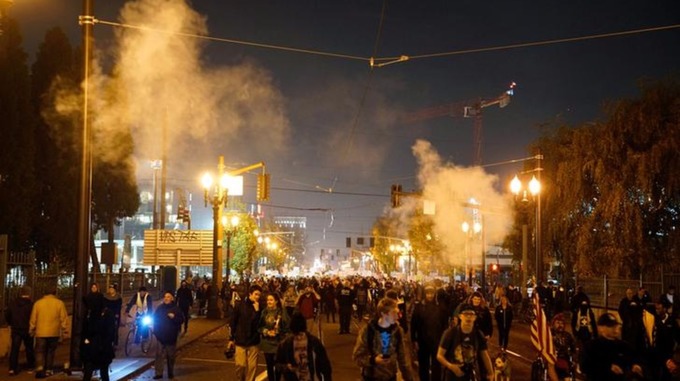 Not content with publishing a daily barrage of anti-Trump articles, The Washington Post is now encouraging demonstrations against the President. On Wednesday afternoon, the Post published a special story, “Amid questions about Russia-Trump ties, protesters rally in front of the White House,” about a few dozen people with anti-Trump signs.

The real purpose of the article was to promote what are supposed to be much larger “March for Truth” demonstrations in Washington and New York on June 3. The objective, the paper claimed, is to call “for more transparency in possible Trump and Russia connections.”

Speaking of transparency, who’s behind the protests? The Post told us they were “liberal organizations.” One organizer told the Post, “This may come off as partisan, but it’s not, it’s open to everyone.”

The official press release for the June 3 event names the “National Partner organizations” as including Progressive Democrats of America (PDA). One of the PDA’s national advisory board members is progressive personality Thom Hartmann, who has a TV program on the Moscow-funded channel Russia Today (RT) called “The Big Picture.”

For some strange reason, Hartmann’s bio on the PDA website does not mention his Russian connection. Somehow, progressive links to the Russians do not fit into “The Big Picture” the Post and other media are trying to paint.

PDA says about him: “He’s hosted and promoted PDA on his progressive national and internationally syndicated talk show—available in over a half-billion homes worldwide.” This is the same show carried by RT.

Here are some actual headlines from Hartmann’s programs:

·       Will Trump succeed in repealing the First Amendment?
·       GOP willing to kill Americans for tax cuts to rich donors.
·       How to fight Trump’s anti-immigrant bigotry.

You may recall that I have video of when I asked Hartmann about taking rubles from Russia. Embarrassed by the question, he tried to grab my camera and silence me.

This Achilles heel of the progressives’ anti-Russia campaign demonstrates how phony their calls for “transparency” in regard to Trump really are.

The left-wing Nation magazine admits that RT America, the Kremlin’s spinoff for American audiences, has been anti-Trump. “Many of the channel’s biggest names were either ardently anti-Trump or highly skeptical of what a Trump presidency might mean for America,” the publication noted. It names Hartmann and former MSNBC host Ed Schultz.

But since RT has been accurately designated as a Kremlin mouthpiece by the U.S. intelligence community, this means that the liberal narrative that Moscow was pro-Trump is demonstrably false. The Nation says, “A simple look through RT America’s YouTube channel throws up numerous clips in which guests refer to Trump as misogynistic, bigoted, and racist.”

So if RT has been anti-Trump, as The Nation admits, then Moscow was lending its propaganda support to the side of the political spectrum that has historically been aligned with the Kremlin—the fellow travelers on the left, such as The Nation itself.

“If RT can be accused of trying to influence the American public, it certainly was not by feeding them a steady diet of pro-Trump information,” the magazine admits.

The PDA is apparently not concerned about one of its board members getting paid by the Vladimir Putin regime. Yet it sponsors demonstrations seeking “transparency” in what President Trump is supposed to be doing for Moscow. This double-talking is what passes for “liberal” activism at The Washington Post.

The “March for Truth” website quotes Senator Richard Blumenthal (D-CT) as saying, “people want the truth uncovered about how the Russians sought to interfere and undermine our democracy and electoral system. And they also want accountability.”

How about some of this same medicine for the “progressives” taking Moscow’s money?

The author of the Post article, Perry Stein, is described as someone “covering D.C. and a lot of protests these days.” Next time, Ms. Stein, please take some time to dig into the nature of these “liberal” protests. A little digging would have disclosed that the PDA, a main sponsor of the anti-Trump “March for Truth” demonstrations, has a board member getting paid by the Kremlin.

The Post keeps telling us that Russia supported Trump. If that’s the case, why is Moscow underwriting Thom Hartmann’s program?

“Democracy Dies in Darkness” is the new slogan of the Post. Journalism dies in darkness, too. It’s already dead at the Post.