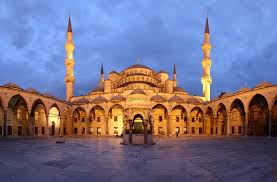 The Islamic Society of Basking Ridge, N.J. was refused a permit to build a mosque last December in a prosperous New Jersey suburb about an hour from Manhattan. The mosque leader who has been a respected town resident for 40 years and his followers met the legal building requirements that all religious buildings must meet.

The Muslim group went even further to preempt a brutal battle similar to what erupted in a town nearby over building a mosque. Trying to satisfy the opposition, the Muslims chose not to have a dome, and its minarets would be chimney-style as are homes in the area. And the minarets would not be as high as church steeples. That would eliminate Christian's whining, “Your minarets are higher than our steeple. It’s unfair.”

The opposing group determined to wear down the Muslims by making various excessive demands. There were 39 public hearings, and almost four years of demands for one change after another by town officials and planning board members. Even though each proposal was agreed to by the Muslims, they were followed by additional demands.

The four-acre requirement for churches was increased to six-acres. The parking lot was approved for 50 cars but was increased to 107 cars. But the mosque approval was denied by the town. Obviously, most of the opposition to the mosque was ill-disguised and ill-considered and without merit.

The major opponent declared, “Shariah law is one of the greatest threats to American values and liberties.” So, obviously, the issue was what Muslims believed and practiced. Therein is the rub.

Christian groups, including some Baptists, got involved in a suit to permit the mosque to be constructed! While I believe in religious liberty, I think Baptists have far more pressing and less controversial issues to support. I wonder if the broad-minded Christians would be so supportive of a satanic group wanting to build a temple for their coven of Satanists! If not, why not? Islam is far more deceitful, disruptive, and dangerous than a few Satanists performing their silly rituals.

Brent Walker is the recently retired Executive Director of the Baptist Joint Committee for Religious Liberty who said, “It’s good when we can join hands with…folks we are sometimes on the other side of.” But God warned us not to be yoked together with unbelievers.

Other non-Muslim mosque-supporters included Dr. Russell Moore of the Ethics and the Religious Liberty Commission (ERLC) and Dr. David Platt of the International Mission Board (IMB), both agencies of the Southern Baptist Convention. Dr. Platt “apologized” for his actions that were distracting and divisive but not for disobedience of Scripture! Bud Ahlheim wrote in Pulpit & Pen, “But in the case of much of the SBC, it seems that Biblical disobedience isn’t all that much of a crime, isn’t a sin, and isn’t an issue. When you get caught, apologize for the confusion, not for the transgression.” True, but that is typical of everyone, including Independent Baptists.

When Dr. Moore was confronted by fellow-Baptists about the mosque caper, he refused to apologize but did manage to antagonize his critics. Moore could only be more controversial if he led a short-term mission project to help build the New Jersey mosque! Reports have surfaced that Moore may get the ax during the annual SBC meeting in Phoenix next month; however, only his executive board has the authority to remove him. The fate of Moore may determine the future of the SBC.

Not to be outdone, the National Association of Evangelicals (NAE) signed on to support the mosque-builders. About 20 other faith-based groups have joined the suit including Hare Krishna, Sikh, Jewish, and Muslim.

The suit declares that the town cannot discriminate against Muslims by requiring a different criterion from other religious groups. This is an old story of which all sincere people should be aware. For decades, Christians in America have been refused permission to build by big-city authorities because “we don’t need any more churches in this part of town.” Of course, this has been an ongoing problem for centuries in Egypt, Pakistan, and Saudi Arabia. I think it should be heralded that there is not one church in Saudi Arabia! Why is no one screaming about that? Have all these religious groups taken a public stand on that issue? Why not?

All right, this is America so we are held to a higher standard. I agree and I feel queasy about the silly, unfair demands made by the opponents of the mosque. If a town can ban Muslims, they can ban Methodists. I detest inconsistency. Additionally, it is illegal to use zoning as an excuse to ban a religious group from building based on the federal Religious Land Use and Institutionalized Persons Act of 2000.

“We really felt it was important to stand shoulder-to-shoulder with our Muslim brothers and sisters,” Walker the Baptist said. Say what? Has Walker lost his mind or is he overcome in a seizure of an ecumenical spasm that shut off his thinking process? All Baptists know that we are brothers to those who have been born into the family of God through the New Birth. Has he been called upon to explain his ridiculously unscriptural statement? Or, is this issue the cause of his retirement?

A major principle that most Americans don’t know is that no one speaks for Baptists. You can speak to Baptists but not for Baptists. I speak for myself.

Galen Carey of the NAE said it was not unusual for the association to support plaintiffs of other religions. Carey said it has backed a Muslim prisoner’s right to grow a beard and Jewish inmates’ right to kosher food behind bars and a Muslim woman’s successful Supreme Court case to wear a hijab while working at a retail store.

I think those issues are without merit, after all, doesn’t a department store have a right to determine employees’ dress? Must a prison cater to every religious practice? Can a snake-handling fanatic demand a bag of rattlesnakes in his cell? After all, that is a religiously held belief with more biblical support than a hijab. And no one can question the sincerity of snake-handlers!

There are limits on what can be permitted based on religious belief. Some church members sit around in the nude - so is the state required to overlook the harm done to children in such a church? If a church believes in sacrificing a virgin on an altar every January 1, are they to be permitted to do it? These days they will not have much of a future since virgins are difficult to find. Since Jehovah’s Witnesses don’t believe in blood transfusions, are they to be permitted to refuse blood for their sickly children? So, there are some limits to religious freedom, and I believe there must be limits on all mosques, and even on churches in extreme cases!

Islam is not only a religion but is a total way of life–economic, social, legal, and religious–that Muslims believe should regulate everyone. Christianity is also a total way of life - but without coercion. It is fact that every true Muslim is obligated to make the nation in which he or she lives, a Muslim nation. All true Muslims believe in sharia law. Since 51% of American Muslims believe they have the right to be ruled by sharia rather than local laws and 20% of American Muslims believe violence is permitted to make sharia the law of the land, it is not only a religious matter. It is not very smart to encourage your executioner.

Islam is a political system taking advantage of our much-revered first amendment guaranteeing freedom of religion. It is seeking to destroy our Constitution and Bill of Rights, to replace them with sharia law to gain world domination and subjugation of all non-Muslims. No mosque should be permitted in America unless the leadership declares under oath that they do not have plans to conquer America; they do not support female sexual mutilation; do not support honor killings; do not support violence against those who criticize Islam or Mohammed; do not support retaliation against those who leave Islam; and disavowal all forms of terror any place in the world. After permission to build the mosque, any deviation of the above would result in the leaders being arrested and the mosque demolished.

After all, under President Bush, on February 13, 2001, Federal Marshals raided the Indianapolis Baptist Temple and carried out many of my friends who were praying at the altar! The feds sold the 6 million dollar property for 1.5 million to a charter school. They attacked and later destroyed the large, famous, fundamental church based on far less (and inaccurate) transgressions than the above.

By the way, where were all the Christian mosque-defenders when this beautiful auditorium was bulldozed to the ground? They were not in Indianapolis for sure; after all, it was an Independent Baptist Church, not a Muslim mosque!

Maybe George Orwell was right. While all animals are equal, it seems some animals are more equal than others!